Sacred Bees of the Goddess, Part 1 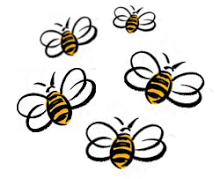 To paraphrase a recent inquiry from a new reader: "What's up with all this bee imagery on your blog?" The answer is that it relates to my spiritual name Debra She Who Seeks.

That is the origin of the popular girls name Melissa. It means "honeybee" and connotes "priestess of the Goddess." The equivalent Hebrew name meaning the same thing is Debra, which is my given name. I have also seen Debra translated more conceptually as "she who seeks." After all, what does a female bee spend her time doing? She seeks flowers and pollen in order to make honey. 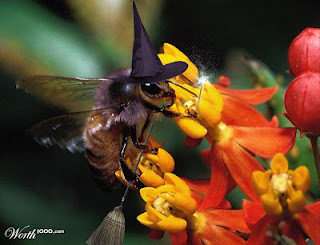 Debra She Who Seeks perfectly sums up my spiritual identity. My name honours the Divine Feminine and expresses my connection to the Goddess. And I have spent a lifetime seeking spiritual truth wherever I may find it. Like a honeybee, I have gone in turn to most of the flowers in the spiritual garden and gathered some wisdom teachings from each.

[Note: This post is a condensed Coles Notes version of six older blog posts I wrote on this topic. Want to read the full version? Check out my archived posts dated December 14th to 19th, 2009.]

Thanks Debra. This was quite informative.

this is so interesting! love the witch bee...she is bitchin'!

Bees always fascinate me. But not from up close, because then i am terrified by them!
When it comes to the baby thing at this point i am the same way plus another cat and a dog!
Lots of love and light!

we do like bees, they bring us honey, without which my life wouldn't be sweet :(

Interesting explanation for the meaning behind the bee imagery.

I love ancient Greek and Roman mythology...fascinating how they mixed such interesting concepts, bees and Goddesses :)
Thanks for such useful info, Debra :)

I think my name means "Crazy Bitch."
I've often wondered where your handle came from!

Bees are so important to humankind in very many ways. If the bees were not present on the earth, in four years time, there would be no human life.
I will go back and reread your "bee" posts. Look forward to further insights. Oma Linda

That is so cool, finding your spiritual path, knowing the meaning of your given name is amazing most of all using its power in your daily life. ;)

I did not know that. Very cool! You have your perfect name, I love that.

I love,love,love bees so much.

I grew an interest in bees when my grand daughter was little and she always was so fascinated with the bee card in a set of tarot cards I had. The more I reseached them the more I grew to love them. they are truly magical little creatures

Very enlightening. I knew something of the Bee Goddesses but nothing of the names of the priestesses. I love this; you learn something every day.

Now come get some of these way ward bees that have been following me everytime I go outside. Seriously! I'm not kidding Deb, they are following me like I'm their mom or something. Even when I stand near a screen door they all of a sudden appear and want to get in. Incidently I was wearing a Kelly green dress yesterday. I wonder if that attracted them?

This is so interesting, Debra! I am going to go back and read your archived posts. Bees are fundamental to our existence! I had no idea that "Debra" meant "honeybee/priestess of the Goddess." Ditto for Melissa!
When I was a kid living in Nova Scotia, I loved apple blossom time in the spring. I would climb up into an apple tree just to watch and hear the bumblebees. It was heaven! Bees are absolutely fascinating!

~and thus you are what helps keep the world go round...collectively gathering and spreading beautiful bits of goodness for each of us here...thank you for sharing this part of you...much love light and blessings~

I love the little hat on the bee.

That is very interesting! So that's how your blog came to be named this way!! I know about Melissa being Greek for honeybees since I speak the language, but I had no idea about the name Debra. Very cool!

I think that is a lovely and apt description, and funny enough, my immediate family refers to each others' "beehives." Mr. RK calls my parents the bees-in-law :)

Very interesting. I agree with some of the others...the little be-witch pic is cute. I had to stop and Google what the Old Greek link to my name was...it is Old Maid or Virgin. Damn, I failed at my own name.

Love this post. Always nice to learn more about favorite bloggers. I have loved that witchy bee on your blog.

They should have asked: "what's with all the apian imagery on your blog?" BTW.

I like it. I like it a lot. This is awesome considering I live in the Beehive state.

Wow, you know a lot about bees! Cute post.

It's quite unfortunate that they're all dying for questionable reasons though. :(

My name means honeybee too <3

I had no idea. How absolutely wonderful that your given name is Debra, as if your path was fixed at the moment of conception. The struggle for the divine Feminine seems to mirror the plight of the bees at this moment in tiome doesn't it? By co-incidence I just posted a fb message this morning that warned that GMOs kill bees. Anyway a lovely, lovely post, Debra.

Debra, this is an excellent post! Thank you for sharing all of this! I find it so interesting. It is sad though, that the bees are becoming less and less. This is not good! I do everything in my power, to bring them into my garden. I love gardening, with them buzzing around me. I have never been stung by one. It's almost like we are communicating with each other.

I think Freya likes the bees because they make her favorite drink.honey wine.

years and years ago in the outskirts of Portland there was an old dude that made all sorts of wines..he looked like the sort that you wouldn't leave small children with, but he put out some great wines..and my favorite was a honey wine he made...Henry's Honey Wine..sigh*..good stuff Maynard.

I actually got that! It was what caused me to start reading your blog to begin with! I have a "bee imagery" thing going on in my own life. Thank you, for once again, sharing in such a delightful and informative manner! THAT is why I continue to read your blog! Peace!

Well Debra your parents were most intuitive when they named you. You come by it naturally.

variations of the spelling include deborah and debrah, as you know...

The Secret Life of Bees. I can't help but think of that book every time I see your blog's bees.
Yet another terrific and interesting post!