Sacred Bees of the Goddess, Part 2

As promised, here's some info about the ancient Bee Goddess jewelry pictured on my blog sidebar.

On the Greek island of Rhodes, archaeologists unearthed several small gold plaques embossed with a winged Bee Goddess and flowers. These jewelry fragments date from the 7th century BCE and are currently housed at the British Museum. The Goddess appears to be wearing a sphynx-like cap or headdress. 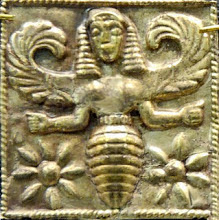 This next gold pendant dates from 1800-1700 BCE. Skillfully crafted on the Greek island of Crete, it may have belonged to a Mellisae, a Bee Priestess of the Goddess-worshipping Minoan civilization. It is called the Mallia Bee Pendant because it was discovered at the palace of Mallia, east of the central grand palace of Knossos. The pendant depicts two bees framing a central drop of pollen or honey. It is now located at the Heraklion Museum in Crete. This final photo from the internet shows a modern altar honouring the Divine Feminine, adorned with flowers, candles and a central motif based on the Mallia Bee Pendant. Isn't it lovely?

These are beautiful. It is astonishing how old the first ones are. The history of these old civilizations is very interesting.

How I hate it that Greek national and historical treasure is still held stolen over at the British museum :(

i love the bees surrounding the drop of honey. your life with bees!

I love that pendant!

It's lovely unless they're stinging each other in some tragic suicide pact.

I've always admired the pieces on your sidebar and now even more so.
Oma Linda

Those are beautiful. I love that there was a bee goddess. As a gardener, I rely on my bees to do their wonderful work. Without them nature falls out of balance. I walk amongst them in my flowers with no fear and they float about me without bothering me. Wonderful creatures they are.

Thanks for sharing, I had always wondered about the bee theme.

Do you happen to know what material is used to make the bees in the bee alter photo? It almost looks like coffee grounds to me.It reminds me of the incredible flower art you see in India, with the amazing patterns made on the ground with millions of little flowers.

The altar is absolutely magnificent. Would really love to be there and take part in a ritual honouring the Divine Feminine! The jewellery is astonishing in its detail and beauty, Debra. I too wondered what it meant when it appear4d on your sidebar! Thanks for explaining.

I am in love with that altar!
I'm in the process of building my own. I adore seeing what other people are led to create.

Thank you for explaining all of these beautiful treasures you have on your sidebar. I love them and I love them even more now, from what you have explained!

Hi Summer -- Unfortunately, I don't know what the bees are made of on the altar. I thought at first it was a wood-burned image, but it DOES look raised up and not flush with the wood, doesn't it? Coffee grounds are as good a guess as any, LOL!

Beautiful and informative. And so ancient. Here we are so many, many many years later, on the internet looking at these amazing pieces. Mind-boggling really.

That altar is amazing! You are the bees knees! :)

I loved the British Museum. I have only seen it once, but I could spend days there.
I wonder, would you ever consider becoming a beekeeper? The world needs more honey, you know.

This is fascinating! Now my stepmom can call herself the bee priestess, too.

Thank you for the information, Debra! One day I would so love to go to Crete! The pendant must have been photographed by my brother or a friend who went to the museum in Crete because it looked so familiar to me.

Ohhh....I think I see a bee goddess in the near future! Thanks for sharing the stories!

Love the altar! The bee pendant is stunning. These artifacts are so interesting!

What do you mean by "bee priestess"?

I'm discovering a love for bees I never had before thanks to you.

Super beautiful altar! wow..i loved this post..I have had a special connection with them for a long time..and reading more is fascinating. HUgs..thanks Deb!
v

The Bee Pendant is gorgeous!

superb, thx for the history lesson :)

RYC: Oh, I guess I missed that part somehow.