Gaydar Then and Now

Back in the Bad Old Days when homosexuality was the love that dare not speak its name, you had to develop an intuitive ability called Gaydar to figure out who might possibly be a member of our church. Gaydar was, quite simply, a survival skill because gawd help you if you made the mistake of revealing your sexual orientation to the wrong person by making a pass at them. You could bring all sorts of disaster down upon yourself by doing that. 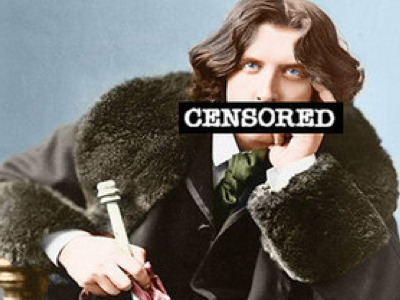 Gaydar was and still is, at best, an inexact science of clues, hints, signals and just plain ol' hunches. When I was a Baby Dyke in the 1980s, my friends and I spent endless hours debating whether someone we met might or might not be gay, based on the flimsiest of indicators. The only way you could be certain was if you actually saw them at the gay bar. 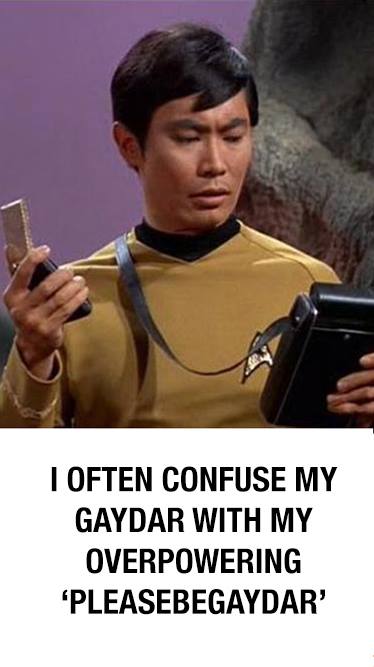 These days, however, we must update the old terminology because "gay" is not the blanket term it once was -- 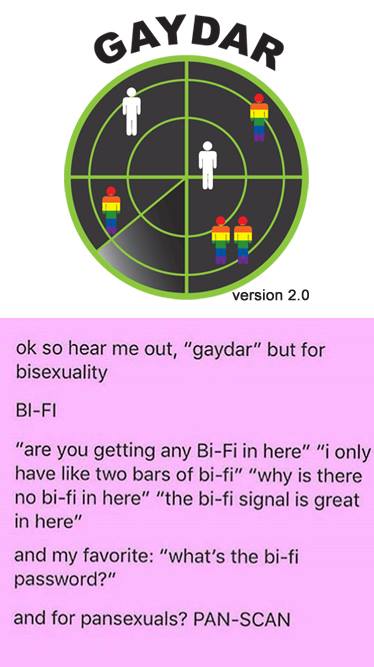 Of course, things have profoundly changed for the better in these happier times. No longer is Gaydar the crucial survival skill it once was. Now it's pretty obvious who's gayer than Christmas -- 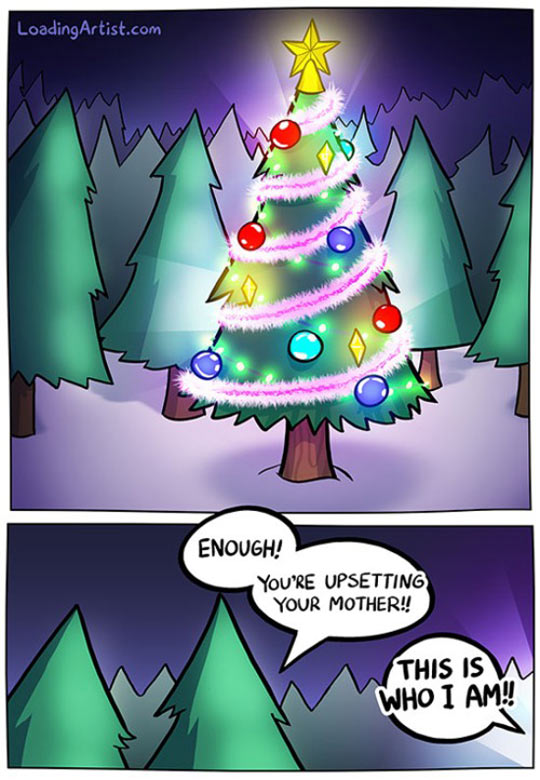 In fact, the quickest and most accurate method these days to figure out if someone sings in our choir is simply to administer the following -- 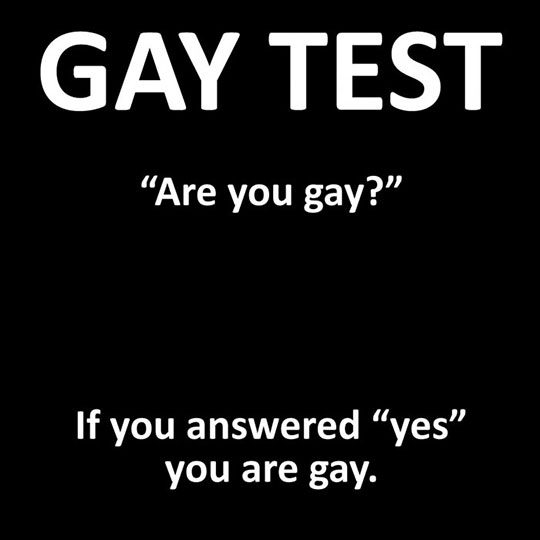 Nowadays the only workout my Gaydar gets is identifying closeted movie stars, country singers and sports figures!

Oh yes, I also think the gay test is the best choice!

We had a minister in our church for over 10 years. Married to a woman with 3 children, I not once realised he was gay until he made a pass at our new male youth leader. As you can imagine, things didn't work out too well there.

I have to say that the Gay Test sure saves a lot of time - and angst...

And then there is trans-dar

Someone had a long picture of all beautiful women from Thailand and it said guess which ones were born male and which were born female, answers are at the bottom.


Trick question, all were born male. One of the reasons why I believe everyone is at least a little bi. The vast majority don't identify as straight or gay after you've been in the bedroom with another person. Most never try both to just to see which side of the camp you fall on.

If I was on a deserted island with a trans-woman who looks like a Miss Universe contestant and Honey Boo-Boo's fat-as-hell disgusting mother, guess which of the two I'd be hanging out with on those lonely nights.

Society is evolving slowly. Our grandchildren will live in a different world thankfully.

my gaydar has always been very accurate. hopefully eventually no one will even think twice about this stuff. we are getting there quickly these days compared to the past.

I always suspected Christmas trees. They were just too cool not to be.

I've always had the ability to mess with people's gaydars. And then when I say that I'm not gay, I smile so much that some start thinking that I'm just playing hard to get. This isn't half bad, since it ensures that I will always have people to talk to when I go to public outings, or I'll always get drinks when I go clubs... But a girl can only drink so many glasses of grapefruit or pineapple juice before people start looking at her funny.

Did I mention that I really love that Christmas tree meme? :-D

I've been at the wrong end of malfunctioning gaydar many times. Let me tell you, it's not exactly comfortable for a heterosexual person to be mistaken for gay either.

Times have definitely changed! As a straight woman I do love that it is acceptable now for a confident straight man to be in touch with his feminine side.

Damn Star Trek! I knew they were, 'boldly going where no one had gone before,' but I miscalculated and thought they were virgin- hunters!!!

Pfhahahahahaha on the Bi-Fi. OMG I laughed hard at that one. Love this post!!

Times have changed thankfully... for the better in this respect!

I wondered about Christmas trees. They always look so fabulous.

I always thought I could figure out who was gay...I still think George Clooney is..hahah

Bi Fi LOL!
George Clooney is absolutely gay and Amal is lesbian, naturally. He is in love with Brad Pitt.

Thank you for the fun

From The Daily Show, I know a radar to identify gays is called... a homometer.

I had a good laugh with these! Your June posts are the best. I'm so glad everything is simpler now. The next generation will do better.

The best part is not having to worry about who is gay or not. I have always assumed any woman who does not throw herself at me MUST be gay. I mean, how could anyone resist THIS? It helps keep my life simple. Wrong, but simple.

My pleasebegaydar gets used alot, but think goodness my gaydar is very good.....most times.

loved that lead in picture of Orson Wells....I am reading his autobiography.....FASCINATING TO SAY THE LEAST!

Is there not an app for this? I don't have such a facility fitted to my brain, one of the dads up at my daughter's primary school (some time ago now) is now a pre op transsexual living with a guy called Bob. Didn't see that coming,especially since he was always flirting with my wife.??!

In proof of the fact that there is an app for literally everything we even have a gaydar app these days. We call it Grindr.

"Gaydar", "Garydar"! Hey, I must be gay because I have more than one bottle of aftershave, various scented soaps and I trim my bushy moustache. Or maybe I'm getting myself confused with "Metrosexual", which, of course, is an uncontrollable fetish for public transport and all things Metro.

May the closets be well and truly, wide open.

OMG they gay test cracked me up!

I kept watching the little video and didn't spot the lesbian couple. My gaydar doesn't work?

My gaydar record has been pretty good ... Years ago worked with a woman who was, to me, clearly gay, but in denial. A couple years ago another mutual friend said did you know 'Pat" got married to a woman? I was like.. "Well finally!" Worked with one guy for a few years though and I would never have thought him gay in a zillion years...

I have been curious about how gay people find each other. You just ask? How about, "You are gay, right?" I just don't see that going over all that well.

My friend Tim told me about the old "Are you a friend of Dorothy?" method of finding out if someone is gay. I guess if the person smiled knowingly and said yes, then they were gay. That last, more 21st century, method seems as though it would work better. :)

It's civilized now - I love the open world we live in. Not so great for my sister who married a man in 1959 who was closeted until the 80s. Wasted years for both of them, but they both did find love. Would love to be a fly on the wall in 100 years - I can only imagine that none of it will matter at all. Hopefully, anyway.

I found the lesbian couple! LOL, guess my gaydar has gotten better over the years.

I have a question for you Debra, we have a close friend to the family, she is 50 now, (known her almost my entire life) and mom and I have always suspected she is a lesbian. But, her family would probably cut her in half, if she was and if she ever came out. She works in Toronto and always talks about her gay friends she goes to visit. Mom and I are always saying things like, if you are gay or lesbian, who cares, as long as you are happy. I know she is 50, but her family as in her sister, and father and nieces and nephews are everything to her. Her mom passed on a few years back. How would you come about to say to her, girl come out, if you are!! Be happy!! It's time! She was engaged when she was in her 20's (broke up) and never dated again.

Don't think I had a gaydar when I was but a youngish rake. If you is, you is; if you ain't, you ain't.

Hi Magic Love Crow -- The coming out process is an intensely personal one. No one can make a decision for anyone else to come out. Some people never do come out, or they come out only to other gay people. As wonderful as it is to be out and free, it is also someone's right to stay in the closet if that is what they want and where they feel safe. Just keep on letting your friend know that you are gay positive in a very general way, but you will have to accept her decision not to be openly lesbian (if indeed she is a lesbian -- the only way you can know for absolute sure is if she actually tells you that she is).

Is it the third couple? I'm going with number three.

The xmas tree one, very cute but the Gay Test, made me laugh out loud for real.

Have you seen the documentary "Do I Sound Gay?"