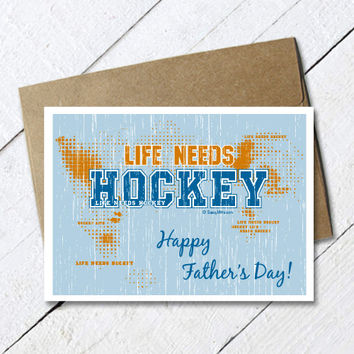 For various reasons, my father is always on my mind in June.

Fathers Day is a big part of it, of course. But June is also my Dad's birthday month. When he died in the spring of 2004, he was just shy of his 80th birthday.

Also, the final round of the Stanley Cup playoffs take place in June these days. Hockey was my Dad's favourite sport. He always watched Hockey Night in Canada on TV every Saturday night, just as he had listened to it on radio ever since the Great Depression when he was a prairie farm boy. My father never played hockey (or any other sport for that matter), but he loved the game passionately.

My Dad taught me the rules of hockey and how to watch it. Apparently certain Americans find hockey hard to enjoy because it's difficult to see and follow that tiny, speeding puck on the TV screen. In the 1990s, FOX network even created a "glow puck" that generated a big on-screen blue/red streak (depending on the puck's speed) in an effort to make it easier for those viewers to follow. Canadians laughed that ridiculous puck right out of the NHL, eh?

So here's the simple but effective secret that every Canadian knows and that my Dad taught me -- don't even waste your time trying to watch the puck, just watch the players. You can tell where the puck is by where the players are headed or congregating, since they're chasing it. And if someone scores a goal, you'll know it by how they all celebrate. That's how you follow the game!

But I really shouldn't make fun of Americans because of the "glow puck." No, it's the Brits who truly suck at trying to figure out what's going on in hockey, as in this tongue-in-cheek clip!

Lol. Love the British commentary. He even managed to get a bra and knickers into the comments.

can't say I ever watched hockey, please don't shoot me :) We do have a small team in our town and an ice rink during winter, but it ain't popular at all

that is just wrong!

this year's stanley cup went to the other big city on the western side of my state. and that's what I know about hockey. I'mma just a big baseball freak.

Watch the players not the puck. got it! Sorry for the loss of your dad Debra. He sounds like a great guy!

June is my Dad's birthday month, too! Every year, I take him to a baseball game. I still don't know the rules, but I do enjoy watching him watch his favorite sport.

I don't watch sports but if the commentary was like that of this British clip I would. Hysterical! The bee keeper uniform is my region's wacky team. Happy memories of your dad today. My dad's dad just passed away last weekend so I am sure it won't be an easy day for him and father's days going forward. Grandpa was 101 so he did live a long great life!

First Happy Thoughts to you about your dad. Second that colored puck lol that was a joke! This was the first taste of Hockey for my wife when we started dating. She tried to understand hockey but had a hard time. She would try to watch the puck as well when I convinced her to just watch the players she started to get it. Then the Blackhawks came along the past few years and all the girls in this house now understand the game! It made me proud when my young girls came home from a shopping trip with Andrew Shaw jersey's I was so proud! Now Baseball comes first for me then Hockey but if you ask my kids Hockey before baseball!

Have a great day!

NOW I want to be a Hockey fan!

This is the time of year we remember things like this about our dads, especially those of us who have lost them. My father doesn't bring hockey to mind. He watched wrestling. And I'd often sit and watch with him when I was a wee one because I loved spending time with him. Happy Father's Day to all celebrating!

Was that a real Brit talking? That must've been the most put on accent I have ever heard!

Me and my dad don't get on which is a sad state of affairs but I'll not bore u with it. June is the month I lost my Grandad who was closer to me.

Ice hockey is quite popular in my hometown although Ive never seen it.

I would love to watch a live hockey game once! I think it would be fun!

So now you have June to memorialize your dad. For me, it's Memorial Day in May because that's the day my dad died and because he was in the military for many years. The only time I've watched hockey was during "The Miracle on Ice" at the Lake Placid Olympics. We do kick Canadian butt occasionally, but I hope it's all in good fun because Canadians are so nice, eh?

I don't know jack-crap about sports but even I know not to watch the ball, puck or whatever. When Tim does have games on, I always look at the bodies and what they are doing. That's the real fun. And I'm not even a native sport watcher like yourself and Tim.

Sorry you don't have your dad anymore.

Such nice memories of your dad - you are indeed one of the lucky ones. And I loved the British commentary - hilarious.

We have an Australian version of that British commentator. He does soccer matches and his name's Alex Williamson. But I won't link it because it's very harsh humour that I don't think you'd appreciate. If you are interested though, look up "Bogan Aussie commentating 2015"

loved your sharing ,my dad also never played hockey but he loved the game most and in my youth just to please him i used to sit and watch game with him though i was huge fan of cricket i also learnt the rules of hockey from my father who left this world few years back and i miss him so much

I still think I have the only non-hockey family in Canada. My daughter-in-law more than makes up for all of us though. She is one crazed hockey fanatic. :)

I'm not a fan of sports for the most part, but I'm always happy to see Lord Stanley's Cup come back to my home state!

My dad's birthday was June 12 - I used to celebrate his birthday and father's day at the same time with him (he always got two presents, of course.) I miss him on father's day especially, when I see all the facebook posts, etc.

I like hockey very much - we don't have it in Atlanta anymore though. :(

Gotta love those Brits!!I love hockey..We have the Hershey Bears...I haven't been to a game for a few years..Have a good week..

They have absolutely no idea about ice hockey over here in the UK, eh!

In the UK, I mention the Canadian Football League and I get perplexed looks. "Is it anything like American football?", I get asked. "Sort of, but way more exciting", I reply.

Here's to all the good dads on Father's Day. A special mention to all the single dads.

And a memory of your dad on Father's Day. Bless your memory.

the best part of the video was watching the Chicago Blackhawks win.
Nice memories of your father.

My dad took us to Hockey games. I used to try to watch the puck - only because I was scared it'd fly at me and hit me in the face. Hm, I guess I've always been a bit pessimistic.

So glad you have these good memories of your dad...mine lived to be just barely over 80...and he was by football the way your dad was about hockey. My dad loved going to high school football games with his buddies...he never played, either....bwaaaaaa...now I am missing my daddy. :(

Great memories of your dad! I never knew anything about the glow puck. That is hilarious!!

LOL ~ so many memories, Debra! Thanks I learned to follow the players and watch for the scoring celebration! I hated that glow puck! It was the silliest thing I've seen in sports. The video was a hoot!