Let's All Read The Bible! 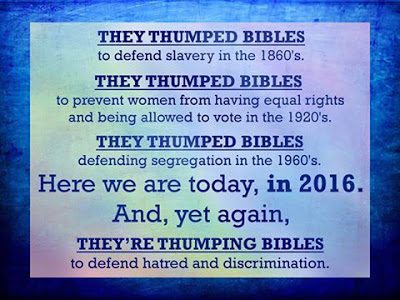 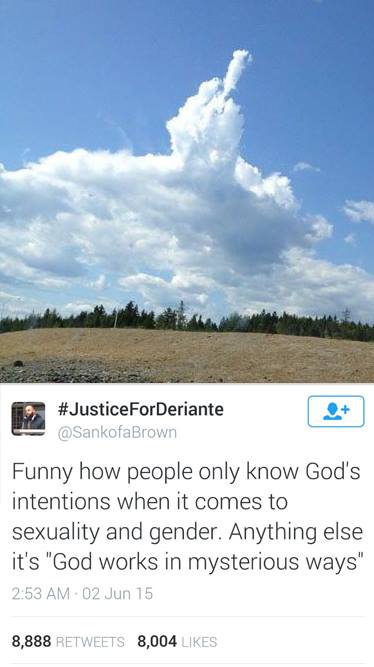 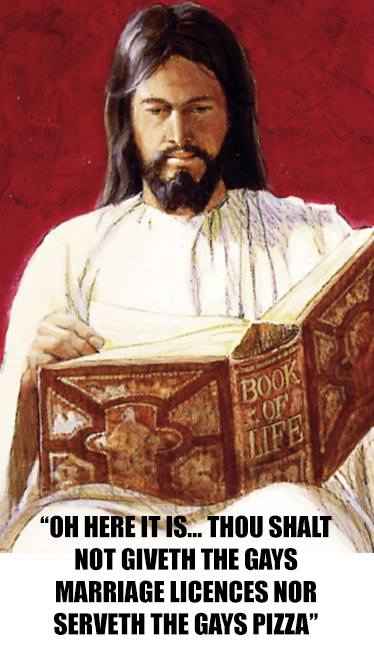 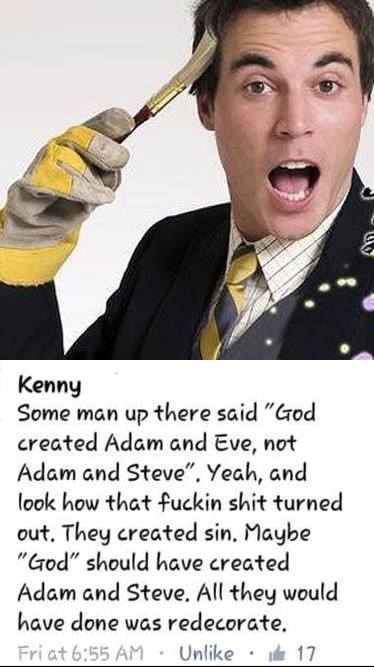 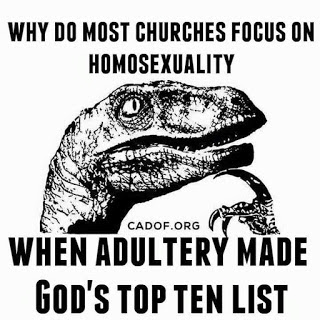 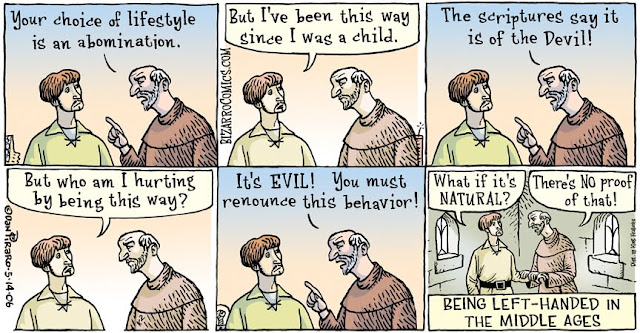 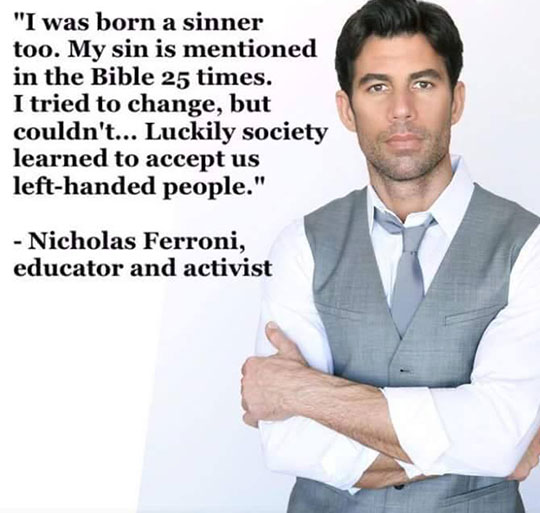 RAMEN, girlfriend! organized religion is the biggest bunch of horseshit EVER! I am glad I think for myself!

Well...I can't really address how all churches speak about homosexuality or how hateful and narrow minded many factions of organized religions can be BUT, I am a Christian and I realize that others might find that narrow minded and horrible (AGAIN BUT) our church is a very liberal denomination that has members with open minds and open hearts. I do read the Bible but realize it was written by men that were inspired not only by what they thought from a religious perspective but the were influenced by the time in which they lived.

There are plenty of married same sex couples in our church on Sunday. With 24,000+ members there is a lot of diversity of all kinds. SO, yes, I am Christian and that isn't for everyone BUT I try to be sensitive to all beliefs. Hope we can agree to disagree on just this topic.

What I'm basically saying is that people are dicks. They will hide behind their doctrines and their causes but at the end of the day they're still dicks. Without that doctrine or cause they would find some other way to be a dick.

where do we sign to be personally educated by Ferroni (if that is him on that photo)?

What can I say? Religion...

People tend to forget that the Bible was written by man for the sole purpose of controlling their fellow men.

"Lets read the bible." Ok, hold on a minute....I think I left it in the parlor as my coaster for my gin and tonic. Or was in leveling the missing bed post foot? I'll be back, this might take some time.....

I suppose bigots will always use religion as a prop to back up their hatred, because it's just so easy and requires no real thought. The majority of religions, though, have some sort of hierarchy. Until those sitting at the very top of those organizations step up and say, "Hey assholes, it's pretty simple. Feed the hungry, shelter the homeless, comfort the suffering, and love one another. What don't you understand about that?" then nothing is going to change.

Religion has been the root of hatred and violence since the beginning of time. So sad.

OK...so I am a hateful bigot that uses my religion to be a dick (although as an older woman perhaps dick is a stretch) but I am not the one name calling here. As for Jesus writing the Bible...WHAT??? the Bible was written by men that followed a man. They were human men that lived in a time where ideas were very different than the times we live in and the book reflects that. There are many organized religions that have evolved with the times. As for all the assumptions that all Christians are hateful, ignorant, biased, and all the other words being thrown around here...I would say there are other groups that might be short sighted besides Christians.

The redecorating part with Adam and Steve! BAHAHAHAHAHAHA

So many interesting points here. The left handed part really got to me. My younger daughter is left handed and had she been born at a during time, the suggestion would have been to beat it out of her!

Great post! Who made these rules? The thing about religion and church, there are so many hippocrites who attend. They think because they attend church, it makes them a good person.

This is GREAT! I love the Adam and Steve redecorating meme. That was good.

I think we can all agree that the Bible is a very mixed bag -- a very mixed bag indeed. So are Christians, Jews, Muslims, Pagans, straight people and LGBTQ people. That's why life is so damn funny!

Haters gonna hate, bigots gonna big. What can we do but live the way we want to... despite them.

In earthly Powers by Anthony Burgess, the homosexual main character rewrite the Genesis... with a man for Adam's companion instead of Eve. Pure genius.

I forget who said it , but "religion is a good thing for good people and a bad thing for bad people." People will use their beliefs to justify whatever positions they already have.

I tried reading the bible, but just couldn't get past all that beggating stuff...by VERY, VERY, VERY old men. Now I am a senior citizen and I see no such beggating anywhere around me. That's how I know it's probably all bullshit.

I still can't understand why this is still a thing. I have friends that cross gender and sexual orientation but not many religious ones. I've never read any religious text either, I refuse to be guided by someone who's been dead for centuries.

“We are all atheists about most of the gods that humanity has ever believed in. Some of us just go one god further.” ― Richard Dawkins

Haha - all Adam and Steve would've done is redocorate. I love it. So true, sadly and humorously.

Ding! ding! I was pissed when I was told ( husband #1) Adultry wasn't grounds for divorce, really? Then wtf did I promise in my vows to forsake all others........I could RANT allllllll day on this, but I'm busy honouring and obeying.......( not really wink, wink)

Had not heard of that left handed issue before. Hmmm.

Oh geez, thanks for reminding me to contact a decorator. I almost forgot that project... and it's so important :)

I'm ambidextrous so sometimes I just choose to be evil. So yes, being left handed is a CHOICE! I said it!

Ah yes, I'm typing this comment using only my left hand. Did I ever mention the dog is bisexual. Wonder what that crap book, aka, The Bible would say about that.

I'm outta' here in case the born-again hypocrites drop by...

It really baffles me sometimes how people in the year 2016 can hide behind a 2000 year old religion so they can be unaccepting.
Thank you for your sweet comment my dear!
Be well!

Although I agree there is bigotry in the world, it seems all cannot be blanketed by one coat. Just like all cops are not racist, all feminists are not man haters, etc. If you hate on one group of people for whatever reason, it is the same as what you are complaining they are doing to you. My church is very open with wonderful people and my minister is gay. I love all walks of life and don't really care for meanies of any sort. If we all stopped labeling each other and just accepted us for our differences, this stuff might stop being a divisive issue in our country. But then again, I dream of world peace.

Yes, it's good to be reminded that criticizing SOME harmful parts of the Bible and SOME close-minded Christians is not the same as tarring ALL Christians with the same brush.

There is good and bad in everything! But, hopefully, more good!!!!! I never knew that about being left handed! That is crazy!

And Jesus did not say anything about being gay but he was real down on divorce!

People who use their religion to brutalize and persecute other people disgust me!