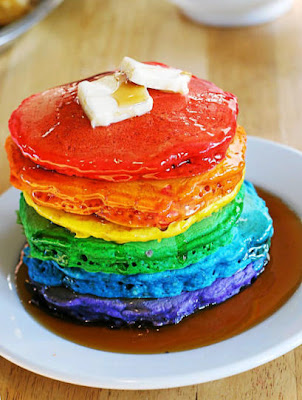 Okay now this is carrying GLBTTQ Pride just a bit too far, people! Get a grip!
Actually, the purpose of these pancakes is not to celebrate Pride -- they are simply part of a new phenomenon called "rainbow food." Eye-poppingly fluorescent food is apparently the Latest Big Thing Among Foodies, according to an article I read earlier this month in The Globe and Mail. Bakers are throwing entire bottles of food colouring into their recipes for cupcakes, cookies, bagels and anything else they can think of. Some say these rainbow foods may be a "festive backlash to the current movement toward natural, unprocessed and unadulterated fare." But one woman hit the nail on the head, I think, when she said that rainbow food is "the kind of stuff that would really delight you as a child but as an adult kind of horrifies."
Posted by Debra She Who Seeks at 05:57

I was going to say my kids would love it, but you said it yourself!

As an aside, this completely and utterly happily married heterosexual woman has become obsessed with "The L Word", most specifically Shane......I'm blaming your gay pride month blog! : )

Thadd would *love* to have pancakes like that :D

~i couldn't agree more with that wise lady...my wee little ones would eat it up...festive and fun like a childs mind! warm wishes and brightest blessings~

I swear I can smell syrup!

I have to agree with the last quote...but hey any opportunity to celebrate diversity and beauty and colorful rainbow food is well worth the maple syrup!

Only a color blind person could still benefit from this mess. I don't like pancakes, and I definitely don't like those rainbow pancakes.

It's kind of like that green ketchup that was test marketed many moons ago. Ick.

I don't think I would be able to eat them. Pancakes have to look like pancakes to me, not like a rainbow.
Mary

Not keen on pancakes most of the time but they are just scary! ;)

They look like a nuclear bombs gone off raining chemical fluorescent colors gone mad on everything...I'll never be able to look at pancakes the same, sigh.... ; )

A complete turn off. They look RADIOACTIVE to me! :D

ti hae pancakes but i would eat these! this gives me an idea for halloween!!!

btw..the dude from twilight is in town filming a movie and if accidentally fell in my new car it would be ok!

Thanks so much for that lovely comment on my blog, Debbie. I appreciate it lots!

You know? I've seen this pic like 1000 times on different blogs. I thought it was photoshopped! Now that I read your post is that I find out is actual edible food! LOL!!

I would have guessed photoshop too. I really don't think I could eat blue or purple pancakes....no sober at least :D

I think they're fabulous! I also think the world would be a lot more fun if adults, particularly parents, stopped freaking out about every. little. thing.

I had blue royal icing at my friend's wedding and peed turquoise for two days. Dont. Eat. The. Pancakes.

brocolli is a bright pretty green and dont see kids beating down the door to eat it.ha

I didn't like pancakes before, I definitely don't now...

but they kinda look pretty ;0)

Well that is totally wild! I think it symbolizes foodies not wanting to be afraid anymore of the food police so they're just going for it. I personally do not use colouring very often but I can appreciate what they're trying to say and do.

If that's the colour going in... imagine what you'll get coming out!!!

I made green eggs and ham once on a whim. I had to scramble the eggs, because I couldn't figure a way to get them green and be sunny-side up like in the books, and since I didn't put a whole lot of food coloring in them they came out a kind of a minty green. The ham was a steak, and so was still pink in the middle, but it was pretty cool.

And why yes I like green eggs and ham.

Hope you are having a great day,
Bird