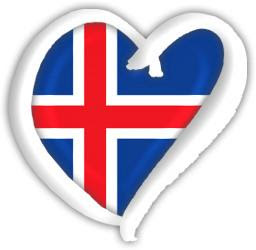 Earlier this month, Iceland became the ninth country in the world to enact legislation making civil marriage legal for same-sex couples. Fittingly, the parliamentary vote occurred during Pride Month. And, in a real first, the vote was unanimously in favour. Iceland also has the distinction of having the world's only openly lesbian prime minister, Johanna Sigurdardottir (who just married her own partner under the new law).
The nine countries in which same-sex civil marriage is now legal are the Netherlands, Belgium, Spain, Canada, South Africa, Norway, Sweden, Portugal and Iceland. Who will be number ten?
Posted by Debra She Who Seeks at 06:02

Same-sex civil 'union' has been legal for several years in the UK. I can't understand why it isn't 'marriage' yet? :o(

I wouldn't look for it to be the United States....even the governors cannot seem to get it together.
Mary

~small {yet huge} steps making such a beautiful difference in lives of so many...hopefully one day soon this will be a thing of the past and accepted by all...why so many closed minded people...i'll never understand...warm wishes and brightest blessings~

I don't know if the US will ever pass it, we are the newbie's and don't want to be told we were wrong. ( I do not include myself in that sad statement.)

Not India. Till earlier this year, homosexuality was a criminal offence!!!!

You can count the U.S. out, our masses are poorly educated which goes hand-in-hand with homophobia and conservative christian ideals (if they aint like us we hate 'em...in the name of god, amen)

i just hope we're not the last.

I think the U.S. will be in the bottom 2 because we're still so driven by the right-wing religious that the politicians keep pandering to them. I have hopes that some day my son will be able to marry the man he loves and be able to be open about it. Unfortunately, in Wisconsin there is a law on the books that if you get married out of state and movecome back to Wisconsin you could be put in jail for it. I don't think it would stand a court challenge but it's bad enough to just have it on the books.

US won't be next until the country and the right-wings this country bows to, actually start practicing what they preach: Christianity.

You know: "love thy neighbour" and "do unto others as you would have them do unto you"

Funny how they forget.

When will it ever end...It’s these so called Christians who don’t know the meaning of it...Love one another!
Yeah, right...Heaven help us all.

In Finland the government has okayed civil unions and
registered partnerships. It's a mystery why the marriages are not!

as we approach the patriotic national holiday that makes americans tear up and grab their guns, i guarantee that it will be far far away before the good old USA will embrace same sex marriage, or the transgendered, or any of the above. because just like the catholic church they want to stay closeted and do all those "perverted" things behind closed doors. home of the brave....bulls**t!!!

Progress comes far to slow in some areas and far to fast in others. If only social injustice moved as fast as technology the world would indeed be a better place.

I really wish that the USA could be number ten, but I know we're nowhere near that.

I live in MA. We allow same sex marriage :)