The Mad Piper of D-Day 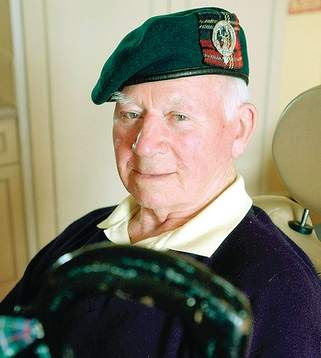 Bill Millin, "the Mad Piper of D-Day," died in Britain earlier this month at age 88. During World War II, the young soldier and bagpiper served in the regiment of Lord Lovat, the commander of the British D-Day troops who landed with the Allies on the beaches of Normandy.

On the fateful morning of June 6, 1944, the 21-year-old Private Millin waded ashore under heavy fire with the other troops, his kilt floating up around him in the waist-high water. But instead of a gun, he held his bagpipes above his head so they wouldn't get wet. There's a famous photo of him disembarking, the drones of his pipes visible in front of his face -- 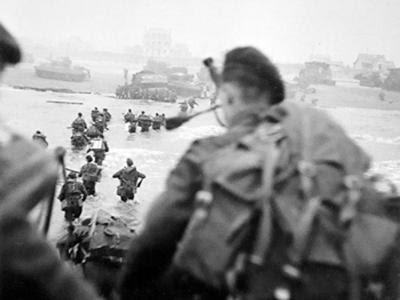 Although playing bagpipes in battle was strictly forbidden by the War Office, Lord Lovat had the unarmed private march up and down Sword Beach, piping Highland Laddie and Road to the Isles as a morale booster while soldiers all around him advanced or were mowed down in the German artillery and machine-gun fire. As Bill Millin said decades later, with amazing understatement, "When you're young, you do things you wouldn't dream of doing when you're older. I enjoyed playing the pipes, but I didn't notice that I was being shot at."

It was truly a miracle that he survived. German prisoners of war captured at Sword Beach subsequently said that the Germans didn't kill him simply because they thought he was insane. That's how he earned his nickname of "the Mad Piper."

There's a great YouTube video about Bill Millin if you want to check it out, complete with an interview about the day that made him a legend.

May a thousand piobaireachd (laments) be piped in his honour.

Nice tribute. I recall reading about this years ago. For sure, I wouldn't have done what he did. BTW, I am curious as to how you knew about this man.

What an amazing man! Wow! I got all teary eyed with this post.

My Father took part in WWII. So these special men hold a place in my heart.

Not to mention that I love bagpipe music. :0)

Thank you for telling me of a brave man, about whom I had never heard.

Hi jadedj -- I read about his passing on the CBC and Globe and Mail websites. And I supplemented it by checking out some British newspaper websites too.

Hi Jeanne -- My Dad was a WWII vet too, although he didn't participate in D-Day. He came up through Italy with the Princess Pats.

War is so sad...so many lost everything...but it made the surviving men/women what they are today...courageous people from a wonderful generation...

That's wild! I'm a musician and it's difficult enough playing in a room when people are talking . . . never mind being shot at!

Amazing! I can't imagine piping while bullets are zinging past you.

Sounds like a man after my own "Mad" heart. But I'm shocked the Germans didn't peck him off for appearing insane. You know, with that whole 'master race' thing and all.

I have always loved his story. So sad to hear he is gone. Very inspiring tale, one I will never forget. Thanks for sharing.

Thankyou for this, it was very interesting, I am going to watch the video. hugs.

I've never heard this story before - glad he lived to a ripe old age. My grandad was involved with D-Day and my other grandad was a sailor during the war.

Where I live now was a command centre for D Day; it was where the Canadian troops left. There were piers along the beach where the boats launched from but they have since been dismantled. However, today there are still reports of footsteps of troops being heard on phantom piers by fishermen at night.

this was really moving! thanks so much for sharing! hugs!!

"German prisoners of war captured at Sword Beach subsequently said that the Germans didn't kill him simply because they thought he was insane."

I think you have to have a certain level of insanity to play the pipes while people are shooting at you.

Regardless, I am in awe of pipers who piped their troops into battle. He will be missed.

I enjoyed your tribute to the "Piper" I have so much respect for the soldiers from "The Greatest Generation," most of my uncles on my dad's side were WWII soldiers, one was lucky enough to swap duties and survive what would have been a direct hit on his ship the USS Hancock. This was my first visit to your blog and I really enjoyed it.

When you have a moment please check out my new blog http://oceanbreezesandcountrysneezes.blogspot.com/

As a founding volunteer and website builder of the Irish Heritage Center of Cincinnati (yes, the Irish pipe too!), I commend this post. Thank you.

Cool story, thanks for posting !