In medieval Europe, one of the greatest acts of devotion which a Christian could perform was to go on pilgrimage to Jerusalem. But such a pilgrimage became impossible when the Crusades turned the Middle East into a bloody war zone. So (it is said) a special labyrinth was designed as a substitute for that pilgrimage. If a Christian traveled to a far-off cathedral and walked its labyrinth, that act of devotion was considered equivalent to going to Jerusalem.
The most famous of these Christian labyrinths is found in the French cathedral of Chartres. Inlaid on the cathedral floor in 1201, it eventually fell into disuse once the Crusades were over and labyrinth walking was no longer popular. At one time, rows of chairs were bolted (!) to the precious labyrinth floor but have since been removed, now that labyrinths are popular again. However, as you can see in this photo, moveable chairs are still assembled on the labyrinth when needed. 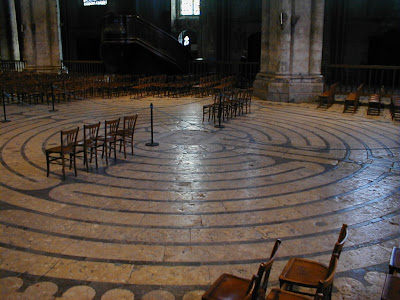 Despite its Christian origins, the Chartres labyrinth retains many characteristics which are distinctly reminiscent of traditional worship of the Divine Feminine. All Christian labyrinths are devoted to the Virgin Mary, for instance. Because of this, the labyrinth's centre is always represented as a multi-petaled rose, the traditional symbol of Mary. 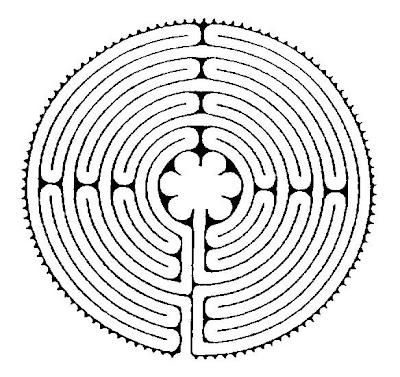 The Chartres labyrinth's centre recalls the magnificent "rose windows" often found in cathedrals and which are sacred to Mary as well. 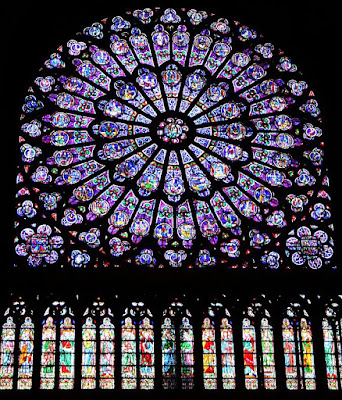 Like labyrinths sacred to the Goddess, the Chartres labyrinth is also circular in shape, the symbol of the Divine Feminine. Notice as well that when one rounded turn meets another in the Chartres labyrinth, a special black space is created (there are a total of ten). Christians call this black space a "labrys." But this is in fact a very ancient Minoan term from the island of Crete. It is the name of the Goddess's sacred double-headed axe used in ritual worship. Clearly it forms the basis for the name "labyrinth" as well. 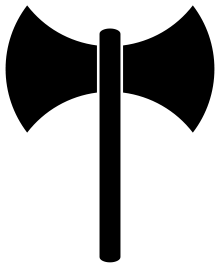 While Christians continue to use the pagan term "labrys," the characterization of the rounded turns as "the breasts of the Goddess" has disappeared. Guess it came a bit too close to acknowledging the true nature of She who is really being honoured by the labyrinth!
Posted by Debra She Who Seeks at 05:32

This is absolutely fascinating reading, Debra. Thank you so much for sharing.
And yes, it is a pity, we seem to have forgotten the Divine Female. Sadder still in India, where she is still worshipped, but the real meaning of what she stands for has got lost.

So beautiful. Thank you so much for sharing this. I am in awe.
Mary

Ya' gotta' hand it to those early Christians though. They did have "the smarts" to grab traditional Pagan things, and 'adapt' them to the new religion.

The psychology was good. Sneaky, but valid. -grin-

I love this series Debra :-) Thank you!

This is fascinating!!! Really really interesting!

~the rose window is absolutely breathtaking...such exquisite work done...i too am enjoying your series...warm wishes and brightest blessings~

thanks for all the information..none of which I knew...

Those chairs are just wrong, but at least they aren't bolted down.

Oh yes, and wanted to send you a link to a local Austin labyrinth: Natural Gardener

This is the exact same Labyrinth that we have here in Toronto. I just walked it the other day. I just read it was based on the very one you talked about. Thanks for the history.

so interesting to see how one spiritual path adopts and integrates ideas from another into it's own...emphasizing the Oneness of all of creation really. the walls of separation are completely imaginary.

This is a great series Debra. Thanks.

I'll echo the others: great series, Debra! Love the history, the symbolism and meaning ... and, as Laura, noted, the integration that belies it. All is One.

My favourite piece in the series so far, Debra! I fell in love with Chartres when I took an art history course some time ago. Many ancient cathedrals are impressive but this labyrinth inspires me, and it is said that the quality of light in Chartres is like no other.

I enjoyed the labrys info, too..actually bought myself one at Pride festival a few years ago..

you know so much about this! I love reading it - I don't have the opportunity to walk labyrinths here, I am not sure if we even have one in our country.
but I am going to Uluru next month and doing a walk through the Valley of Winds at the Olgas.

I have much reading to catch up on here - been a little forgetful with blogging lately :)

Same Labyrinth we have at our church too...we have an indoor one that can be laid out (walking it at night by candle light is breath taking!) And We also have an outdoor one too, that is open to the community irregardless of faith or background!
This is the first one I walked in 1998 that moved me so...I think it would be fair to say it changed my life!