The Moon is Mother to the Sun 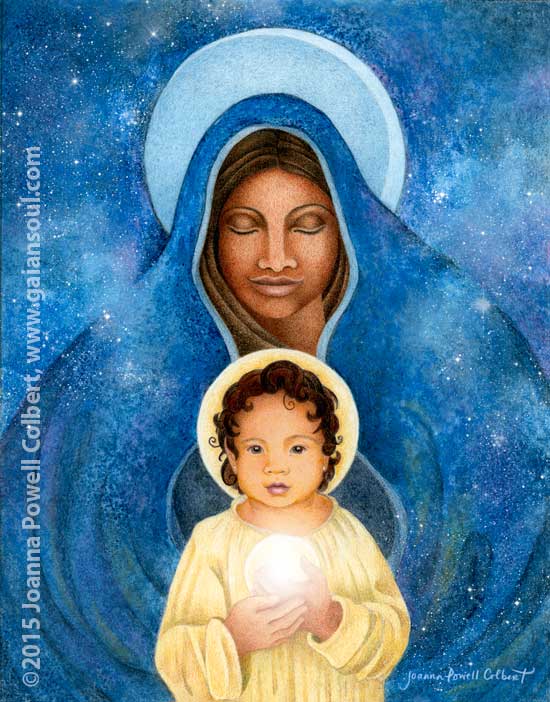 Today is the Winter Solstice, when pagans celebrate the return of the Light following the longest Night of the year. Artist, blogger and tarot guru Joanna Powell Colbert has created a wonderful new image to capture this ancient spiritual truth. Officially entitled Mother Night Who Gives Birth to the Child of Wonder at Winter Solstice, Joanna also calls this artwork by a much shorter title: Dark Madonna & Daughter.

Joanna describes the piece as "the archetypal Divine Child, born on Winter Solstice . . . [who] glow[s] like the reborn sun in the arms of the holy night." The title of my post comes from an equally perceptive description of the artwork by a 4-year old girl whom Joanna quotes in her December newsletter.

The 2015 Winter Solstice arrives in the northern hemisphere on Tuesday, December 22 at 04:49 UTC but time zone differences mean that it arrives here in Edmonton, Alberta today at 21:49 MST. So I'm celebrating now, although a lot of you will mark the occasion tomorrow instead.

To all who read my blog, may the blessings of the Mother and Daughter be yours on this Winter Solstice and throughout the upcoming year!

[Art © 2015 by Joanna Powell Colbert and used with her permission. Joanna's website and blog are here and her art prints may be purchased here.]

blessed be to all! I welcome the return of the light!

this is so beautiful, what a wonderful way to start my day,

Love this post. Every year my husband and I await the return of the light and our daughter was born on the winter solstice. Love his day for many reasons and thankful for many blessings

Oh I love this. What a beautiful painting. Thanks for sharing.
Mary

no wonder I didn't sleep well if it was the longest....

That is a really beautiful picture. I didn't even realise the solstice was upon us already.

Wishing you well today and in the New Year.

What a dramatic painting. Beautiful.
Wishing all the Best of the Season! ♥

Wonderful picture and blessings to you!!

Blessed Solstice to you and yours! We'll be celebrating the return of the light today and tomorrow, although we won't see anything through the torrential rain...

Beautiful painting and piece... Blessed Solstice and welcome to the returning light.

Happy Winter Solstice! This painting is such a beauty!

Thanks for the blessings! I might go out naked tonight and run around in circles for a minute or so in the moonlight. Any longer and I might freeze some important parts or scare the deer.

Goddess bless you and thank you again for all the help you give each year to my oldies..

Happy Solstice Blessings to you!! I am celebrating today. No way am I getting up at midnight! :)

What stunning artwork! I sure doesn't feel like the Winter Solstice here today. This week it's to be extremely mild. Bring on winter....Im ready to hibernate already.

May the return of the light be a blessing to you and yours and fuel your energy to be who you are to the fullest. Happy Solstice and Merry Yule. xoxo Oma Linda

Beautiful artwork. Happy Solstice Blessings to you my dear.

What a stunning piece of artwork. Happy Solstice! YAY...the days are going to start getting longer.

That was such a beautiful post! I love the art and the spiritual conception. Many blessings to you and yours!

A very positive and energizing view of Winter Solstice.
Wishing you and yours, Debra, a most enlightened and blessed day and year ahead.

I love a good bit of primitive Yuletide spirit. I so long for a true winter that never comes.

Shows you what I know, I always thought the sun and moon were a couple.

A thoughtful post, indeed! A belated shortest day of the year in the Northern Hemisphere. Although, I'm rather baffled because I thought every day was 24 hours long....

in truth, the moon (along with all the planets in the solar system) came from the Sun. More like the Sun is the moon's dad. Silly pagans.

Thank you for the warm blessing, beautiful picture, and for your kind words on my blog. Happy Winter Solstice aftermath.

Adam is perfectly right. Only the scientifically abysmally illiterate can claim that the moon is "mother" to anything, let alone the sun.

What a beautiful image. Solstice blessings o you too!

How beautiful! Solstice blessings my friend!

Beautiful!
Merry Christmas to you Debra...
Thanks for being a great peep!
Cheers!
Linda :o)

Happy Happy Solstice to you and your honey bunny.

Solstice blessings to you Debra. Such a beautiful post.

Your post title makes no sense to my scientific inclined mind. Science has provided an answer for the birth of all we see and feel around us. The makers of stuff are stars. So the sun would be the mother of the moon and earth and us and that jackass running for President here in the US. Best of whatever you celebrate.

Beautiful art, thanks for sharing! Solstice blessings to you, dear debra!

Beautiful Image..Happy Solstice to you..All the best for a happy and healthy 2016

Now I have a wonderful image of a babe grown "in the arms of the holy night." Thank you for that! ♥

And blessings to you at this natural, special time of year.
the Ol'Buzzard

Happy solstice blessings! Peace and prosperity to all.