Today is the sacred day of Sankta Lucia, the Scandinavian Goddess of the Winter Solstice. Following the longest night of the year, She brings back the light of the sun, not only to illuminate the darkness, but to ensure human survival. Sankta Lucia's name means "Holy Light." 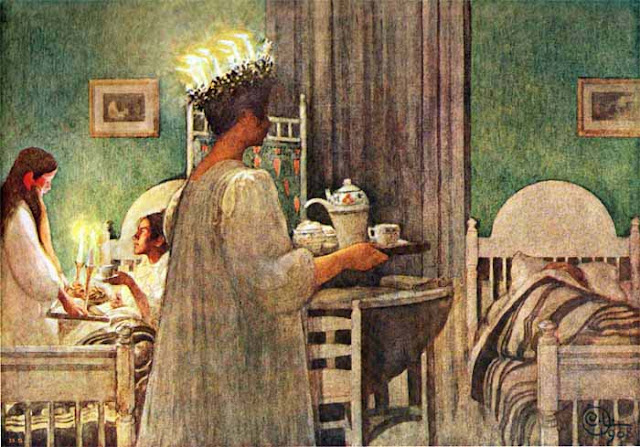 When Northern Europe was Christianized, the Goddess was transformed into a Saint, but Her Feast Day remained on the Winter Solstice and Her rituals continued unchanged. 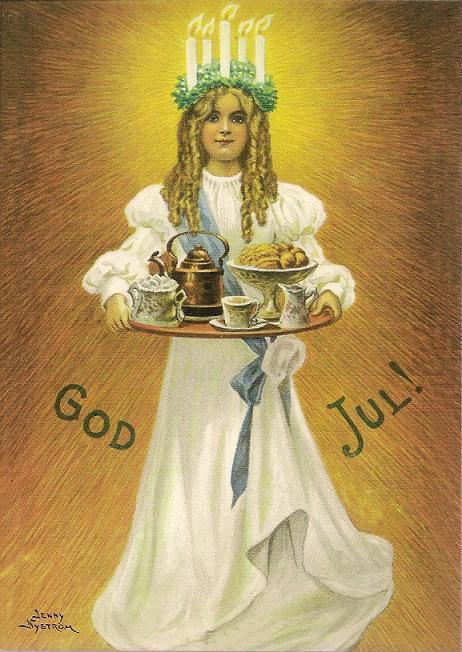 However, when Renaissance Europe switched from the Julian to the Gregorian calendar, several days were lost in the conversion process and Lucia's Feast Day ended up being on December 13, where it has remained ever since. 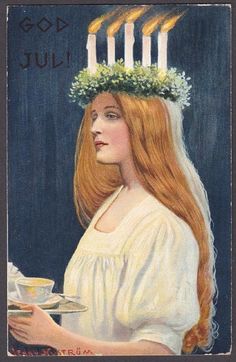 A Scandinavian daughter wearing the Crown of Light greets her family at dawn on the Winter Solstice and serves them the bounty of the Goddess -- coffee and special yellow saffron buns which represent the returning light. 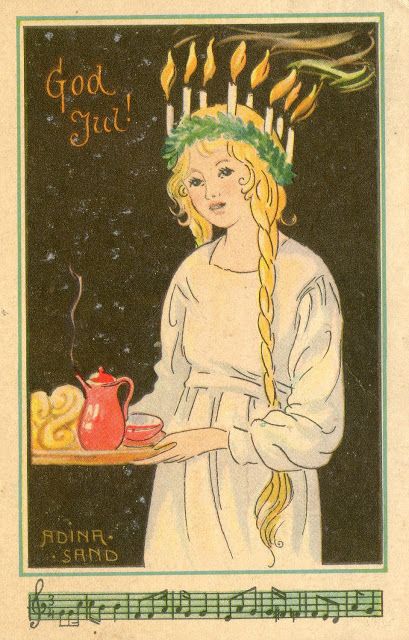 All the images in this post are classic vintage representations of Sankta Lucia from the early 20th century . . . 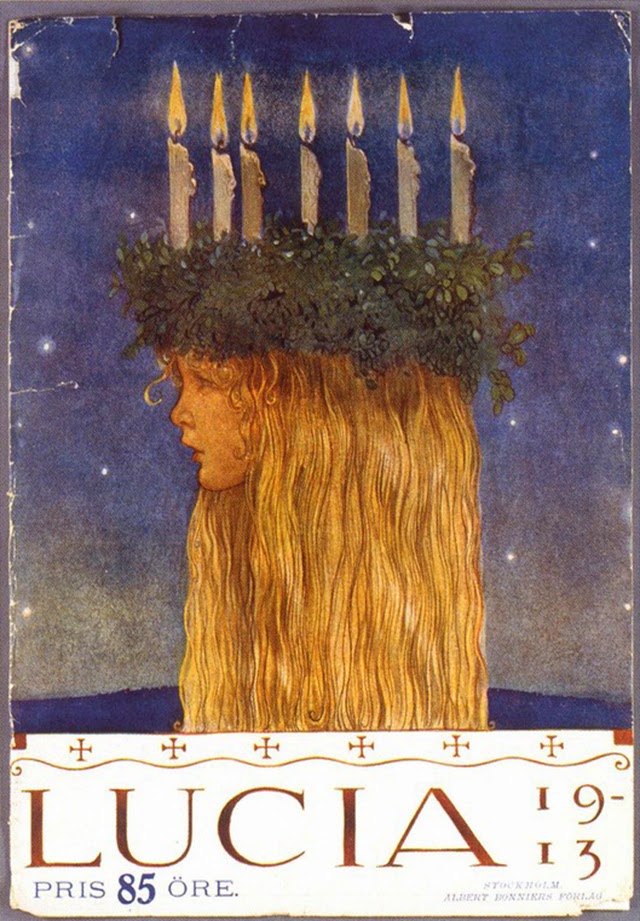 . . . except for this photo. I simply had to include it! Isn't she the most darling little Sankta Lucia you've ever seen? 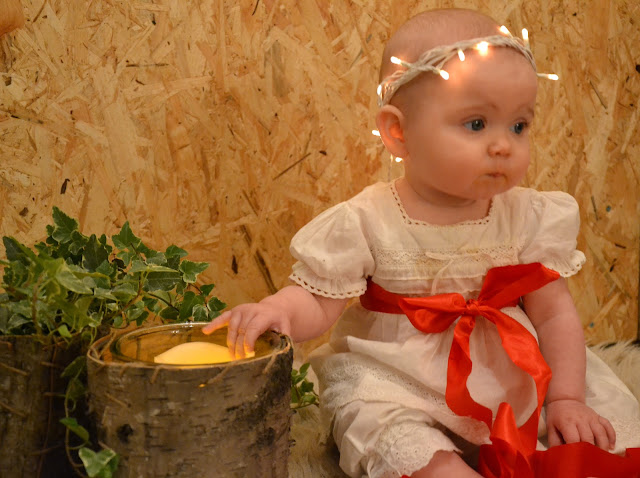 [All images from the internet]

Yes, she is certainly cute

Oh, such a sweet baby!

I celebrate the return of the light; we humans need and crave more light over darkness!

OMG they didn't put Christmas lights on the head of that baby!

We don't have Lucia, but December is usually filled with some holiday each Sunday, St Nicholas, Father's Day, Mother's Day, then Christmas, then in January Orthodox Christmas....

Such a lovely tradition. Cultural differences make the world such an interesting place.

Another interesting post! Over the years I have learned to embrace the winter solstice. While I enjoy summer, I don't mind the dark. And who doesn't like to wear a crown of candles on their head?

In our modern world, I wonder how many realize the joy of light when the world was so very dark.

Well now we know where Michael Jackson got the idea for his flame war...

(And she is most certainly adorable!)

Such beautiful images! And that last one ... awwwwww! Saffron buns don't sound terribly appetizing to me somehow. I don't think I'll even bother looking for that recipe. :)

I always enjoy these posts, Debra. You share the most awesome things. That baby is so cute!

Great vintage photos and history. That last photo is beyond adorable!

Great images of a beautiful goddess and a goddess in training too. Thanks my special holiday elf. The Cuckoos are thrilled. xoxo Oma Linda

I wonder how those girls manage to serve buns and coffee without lighting their hair on fire?

Saint Lucia is one of my favorites. Thanks for all the pics.

Always reminds me of one of my favourite movies of all time... The Ref!

Awesome tradition. Any goddess/saint that serves coffee is #1 in my book!!

Nothing more beautiful or vintage charming than an innocent ! I love your photo choices! Perfect!

Thank you for sharing such a wonderful tradition.
It's amazing to me how the longest night of winter is followed by the
daylight getting longer. There is a logical scientific reason for this but I
still find it special.

I remember my Swedish sister (Swedish student who came to live with us for a year) told us all about how they celebrated Saint Lucy. I didn't know then about the Pagan origins, but I remember eating the special cakes/scone things she had baked around that time, after or during a game of Dungeons & Dragons.

Candles on my head would make me nervous. But I will take the coffee and buns.

Did you say feast? With coffee and pastries? I don't care what it's called or how they change it over the years. I'm on board.

Wonderful pictures. And yes that last one rates high on the cute calculator.

I know all about this day, as I have a Swedish partner. I hope that last sentence sounded vague. :D

Blessed Solstice ahead of time! That's what all the winter holidays are celebrating...
The candle crown looks hazardous.

My wife and I do not celebrate Christmas. We exchange gifts with each other on Winter Solstice.
the Ol'Buzzard

There was a huge measure of relief in that last photo that someone didn't put candles on that baby's head. The wax alone had to be painful, right? I mean, not to cast aspersions on this celebration, but lighted flame perched that precariously that close to a person's hair seems like a bad idea.

She looks like a china doll. So sweet. Very informative post. Thanks for sharing. Have a wonderful week.

I might have to put some of those candles on stick figure, me.

That is one cute little kid. It's nice when ancient traditions like this are still kept. Let's hope Sankta Lucia herself doesn't get confused about when she's supposed to give us back our sun.

I'm sure the timing of Christmas was related to the Winter Solstice. I'm wondering how tales of Sankta Lucia mishaps there are.

Adorable! Must say, though, when I look at those candle crowns on all those long tresses of hair, my heart skips a beat.

What a lovely custom, serving ones family a sunny breakfast to welcome back the light. That baby is too freaking cute!

O, I love this so much....and that sweet little tiny baby girl...OMY..she is so adorable...

Awww, such a special post! I love the little one at the end! Thank you for all this meaningful information! Truly loved it! Do you go to the Edmonton zoo? They showed it on our news, with all the lights had been put up. Looked gorgeous!

From the internet but still lovely!

Candles on top of a head?
Dangerous.