The Nativity Story, Then and Now

Poor neglected Joseph NEVER got much attention, did he? He wasn't the star of the show by any stretch of the imagination, but he was still a good guy. You could always COUNT on Joseph. 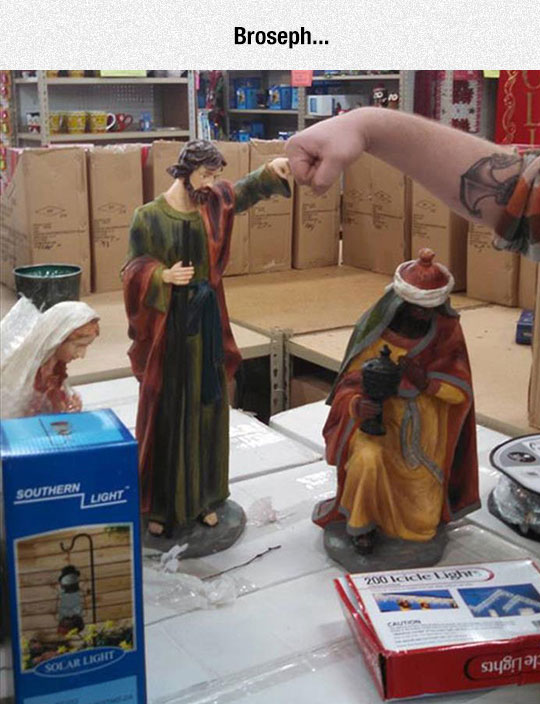 Really, he was just like EVERY Dad on Christmas Eve, wasn't he? Trying to put impossible stuff together for his kid with instructions in some unknown language like Swedish or Chinese or Swahili -- 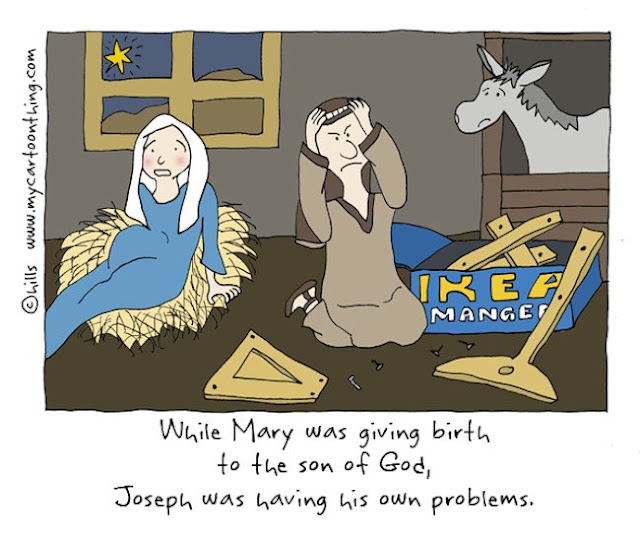 Don't forget those three Wise Men too! Not many people know they were called that because of all their LAME WISECRACKS, just like those drunk uncles or uninvited cousins who always show up at our Christmas celebrations today -- 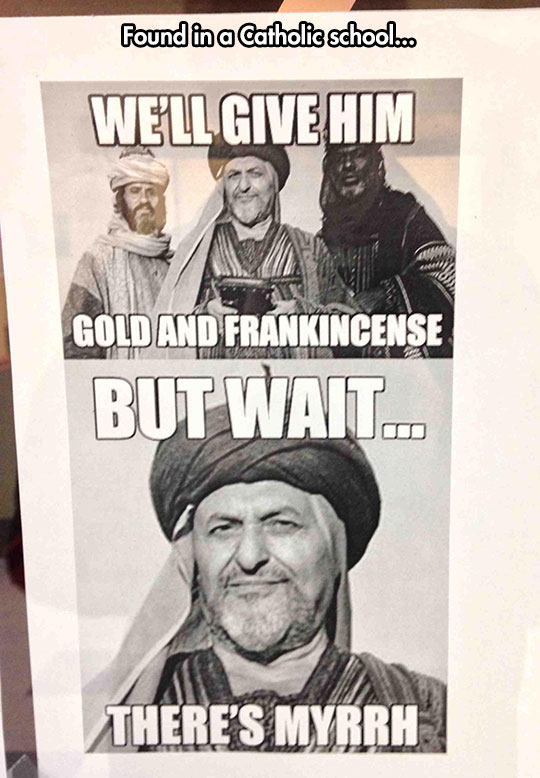 And just like EVERY family gathering ever held, there were some relatives and guests engaged in activities which were best NOT talked about . . .

But still, everyone tried to get along because it was Christmas, after all. Even if perspectives differ WIDELY, the rule was and still is that there's NO FIGHTING, you guys! 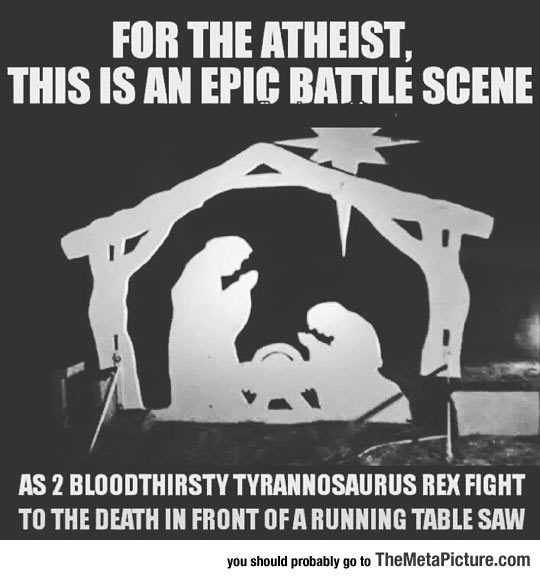 THIS year, however, the world is such that we need to boil the Nativity Story down to its MOST BASIC ESSENCE . . . 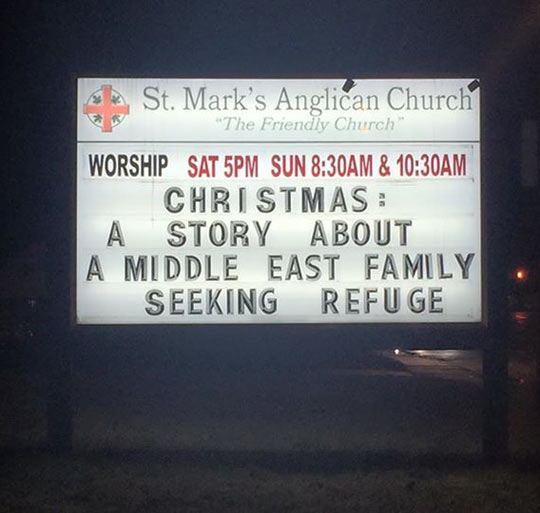 . . . because it's VERY relevant to what's going on in TODAY'S world. 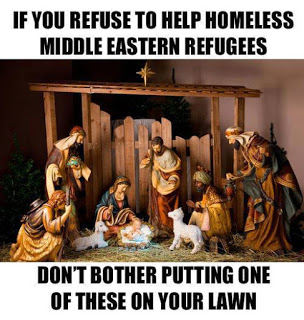 A nice little message at the end there. To be honest it took me a while to see the t-rexes in that picture. But it was pretty damn funny when I finally got it.

What a delightful way to get a point across.

that was the best, simply the best!

That last meme is so true.

The nativity story doesn't make a lot of sense. Take the famous song

Do you know what I know?

A Child, a Child shivers in the cold--

Let us bring him silver and gold,

Let us bring him silver and gold."

Did nobody want to bring Jesus a blanket? Sounds a lot better than silver and gold to me in that situation.

I also find it funny that the Bible can't really explain how anybody really accepted Mary's story. If some girl told you she was a virgin that was pregnant from God, would you believe her? Of course not.

I read the Quran version (or at least the wikpedia summary) of Jesus' birth and he's able to talk at birth unlike the Bible version. Though he's not considered the "Son" of God in Islam. Though if you find a baby that can talk like an adult, I might actually believe they are supernatural.

I love the point of the last one. To quote another "churchy" thing. "Let there be peace on earth and let it begin with me".

thanks for thinking of us unholy atheists too!

*giggle* Love how you started off funny and ended up super funny as well as making an excellent point,

I always thought of the Three Wise Guys as being the Three Stooges or some of the Marx Brothers. I love the T.Rexs and table saw!

P.S. I was always pretty impressed with Joseph taking care of Mary after someone else knocked her up. Very few would be that understanding.

And you even squeezed in a lesson here. Sneaky and smart. But mostly sneaky :)

A fun post and the last really is the truth.

Well done! I enjoyed this, Debra.

That's a damn good post. I especially like Broseph. One of my favorite jokes has always been Elizabeth scolding little John the Baptist and saying, Why can't you be more like your cousin Jesus?

YEAH - the last one!

and I had to go back and look for the t-rex; yeah, sometimes I'mma bit slow on the uptake.

Good point! And these are pretty funny - except i couldn't find the t-Rexes. Found the table saw though so, phew, I'm not an atheist!

More like the three wise guys, if you ask me!

What a superb post, Debra. A nice balance with a provocative ending. And that Joseph was one very understanding dude.

Well now I've always been a big fan of Joseph so I'm glad to see someone giving him centre stage for a big. And love the ending - fortunately it is a message that many are hearing and taking to heart.

Joseph really doesn't get enough credit. He's been cuckolded by the creator, can't really complain about it, then has to raise a petulant child with miracle powers. Joseph needs a holiday of his own.

The last two pics are very true :(
How could we wish to have peace on earth when we ignore the plight of fellow men.

Mary re-gifting made me chuckle... Then I got to the last two pictures and the laughter turned into lots of nodding. Brilliant. And so very true.

Loved these funny ones. That one with the IKEA manger kit just cracked me up to no end. Good choices.

I loved these..I can always count on you..The "seeking refuge" one was great..

can you imagine how Mary Joseph and baby Jesus would be welcomed today?

All are very funny.

and Joseph was raising someone else's kid.
the Ol'Buzzard

Exactly what the world needs today - to look at things on a lighter note.
The last one is the best.

I think you just wrote the most perfect Christmas post :)