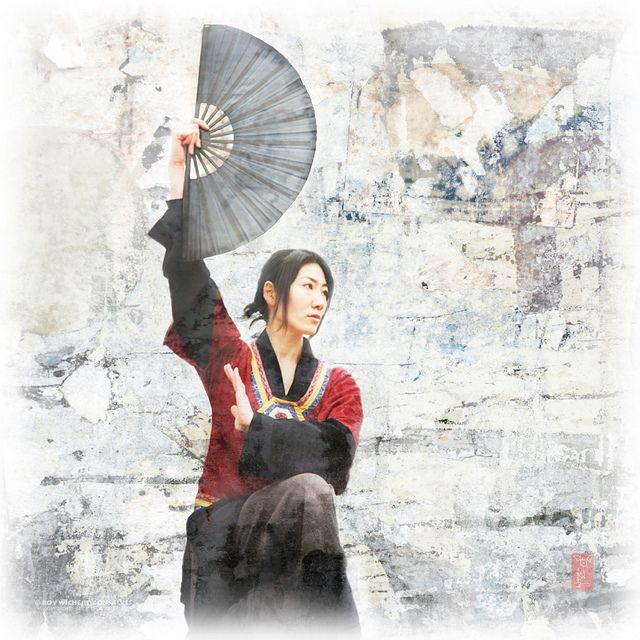 "Fan" is my favourite tai chi routine. As mentioned in an earlier post, it took 5 months of almost daily lessons and practice for us newbies to learn this 3-and-a-half-minute routine in our tai chi group. I was worried that my somewhat arthritic hands would not be able to manipulate the fan. And yes, some days my fan was dropped or flung or only partially opened.

But the surprise issue for me was how hard the routine was on my legs. At times, I could barely keep up. My legs were burning and aching. Everything was happening so fast! But once the routine is finally learned and becomes part of muscle memory, it seems to slow right down to a much more manageable pace.

There are a lot of subtle hand and wrist movements required in using the fan. These movements are not meant to be purely decorative. The teacher corrected one of my wrist movements in class, showing me how to twist my wrist in a certain way before opening the closed fan. "You must gouge your enemy in the side first," she told me. 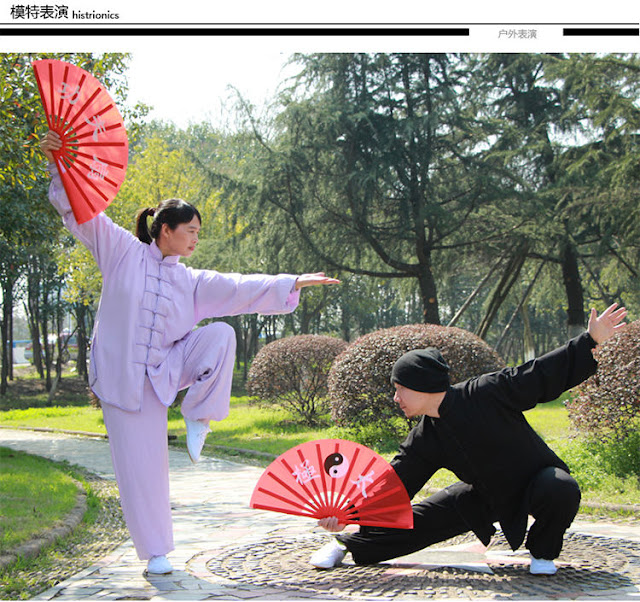 Because we are geezers, we get to do modified versions that are not so hard on us. We don't have to hold the one-legged pose so high or so long. And we don't have to get down anywhere near so low to the ground on any move, including this most extreme one. Thank the Baby Jesus!

Here is a wonderful video of a tai chi master doing the routine. (Just pretend it's me, LOL!) I love hearing the snap of her fan! And watch for the grips and slices you saw demonstrated in the martial arts videos from my previous post --

While I was learning this routine, I would wake up in the middle of the night and that music would be running through my head on an endless loop. Talk about a crazy-making ear worm, LOL!

Oh my this is beautiful! I had no idea it’s so physically taxing, really beautiful to watch, I also had no idea of the battle aspect,, wow,, some deadly moves in tai chi. I’m so glad you shared this with us,,

You kept at it until you got it. That's something to be proud of.

I love the grace of it all.
Even the special allowances for geezers!

Ohhh when you hear that clap and the fan opens... Yes!
It's mesmerizing. Beautiful and technically difficult. Anything that looks that easy is most probably totally difficult to achieve.

I give you a lot of credit for learning this and sticking with it over the long haul. I'm sure it has been beneficial for the arthritic joints and overall health. I always thought Tai Chi was an "easy" exercise until I tried it years ago...the class was only once a week for 6 weeks! But now walking the dog and vacuuming is my exercise...you should see me do my vacuum cleaner routine!

I haven't been committed to anything for 5 months! Well, maybe last year harvest. But that does't cout cause it's still not done.

It has a catchy tune and you can dance to it. I like the song. And rest assured you killed it in my imagination. Well done!

Flung at someone I hope :)

It looks like the practice is great for balance, an issue for us oldies.

Hello Debra, Apparently, in fan tai-chi as in music, the slowest, simplest and most graceful parts are the most difficult. They take the greatest control, and are actually much harder than the showy routines.

Have you been busy sharpening the ribs of your fan? Unsuspectingly, people used to think that a lady's greatest weapon was her hatpin--as in this great classic by Elsa Lanchester: Never go Walking Without Your Hatpin:
https://www.youtube.com/watch?v=N6_PjRCkGoo

This is so fascinating!!! I can see why your legs would be sore!
thanks more sharing all this ~ More!!

I was hoping she would cut a board in half.

That is so cool! I love how your instructor said you have to gouge them in the side first. Who knew Tai Chi has such a dangerous element! lol

Wow it would take me months to learn that routine too.

Interesting video. I remember an African coworker asking a Chinese coworker why their songs sound like someone stubbed their toe.

She's so graceful. I could never do half the steps she did in this video so I'll keep with my daily low impact Tai Chi exercises thank you very much. I'm much to out of the loop age and movement-wise to take up anything like this. But it is interesting to see.

Doing these moves in slow motion is bound to be far more difficult and especially so whilst also keeping your balance. I am sure that you must be feeling far more fitter than you were before you began Tai Chi.

That is SO awesomely cool. Bravo Debra! I can see now why it took you so long to learn, it's pretty damn complicated! And I can also see why your legs hurt, it's a good workout!

Graceful AND lethal -- what a combination! Fan tai-chi certainly puts antebellum ladies and their vapours to shame! LOL! The snap of a war fan would certainly get one's attention too...

What a beautiful form. Beautifully demonstrated.

I am so impressed. I can visualize all those moves, but could not perform one, save gouging my enemy in the side, first. My, that fan does snap!

I'm very impressed that you can do even a modified version of this routine! It really takes grace, coordination and discipline. Sadly, I possess none of these skills. Congratulations Debra!

That is so cool. I would love to see you work that fan.

gouge your enemy in the side first - wow those are strong fans
Are these fans expensive?

@ Bill Lisleman -- No, performance fans are quite reasonably priced. Mine cost $15.

YOU are amazing! What skills. What grace. What strength. I’ll only watch once for now so I don’t catch that ear worm.

your attachment with your mission impossible is really IMPRESSIVE!

this is so compelling indeed:)))

i bet this is just beginning of transformation:)
hugs!

How much space is there between the dancers? Seems like you might be wacking each other with fans while learning.

Beautiful..Yes, we geezers need a break..I could do the standing one but not hold it..The other one...if I got down, I'd never get up...Have fun...

Oh so beautiful! Peace-filled. I can only imagine how empowering it must feel to perform this. You go, girl!!!

I can see how it can be hard on the feet. I'm surprised that woman didn't twist an ankle.

Awesome clip and that music is fantastic! I can certainly see why this is so challenging.

Tai Chi Fan is beautiful. I never mastered Tai Chi though my wife and I took numerous classes.
the Ol'Buzzard

I must say it looks quite elegant.

The one-legged pose makes me think of The Karate Kid.

It's wonderful that your are learning something new.

Thanks for sharing. That was amazing. So fluid. I don't think my knees would cooperate but you never know until you try, right?

I just did a whole lot of sighing while I watched you *cough* perform. Seriously though, the grace this person shows is... enthralling. I can also so why your legs (and other muscles, I'm sure) burned while going through the movements--this kind of fluid control requires a lot of work!

You know, the more you share about tai chi, the more I want to do it.

The fan routine is so fluid and graceful. Kudos to you for mastering it, Debra! A lifetime ago I studied karate, so I can relate to how it takes time to master a routine. Thanks for sharing your adventure!

I can barely stand on one leg for any length of time. So I thank Baby Jesus for you too.

This is beautifully impressive.
Thank you for sharing it, Debra.

WOW!! That is beautiful, and very interesting. I've never seen a full routine before. I can certainly see why it took that long to learn, and that your legs would be burning. Looks like a very involved, and intricate with with different ankles of hands, feet etc. A lot to learn and it looks like tremendous exercise. Congrats to you for doing it. Very impressive.

OMG its awesome you got to learn this. Super jelly over here.

Good for you Deb! You should be very proud of yourself!!! This is amazing!