A tai chi performance fan is made of bamboo and silk. The one I have is a peony style in black silk, as pictured here in the middle -- 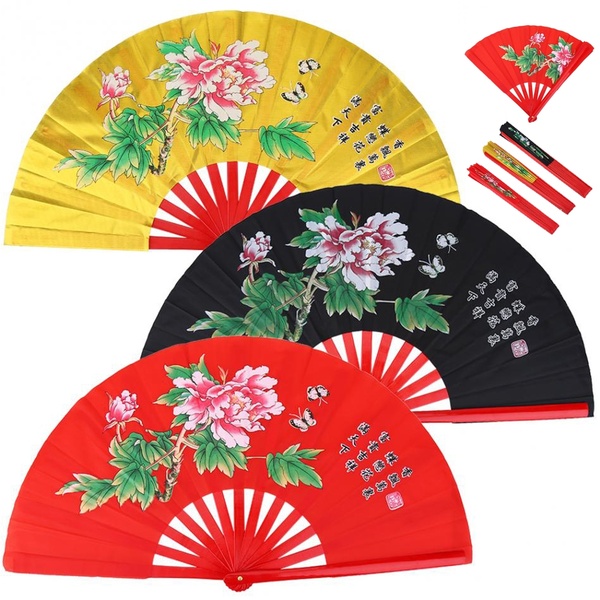 A tai chi fan routine is, like all other tai chi routines, based on martial arts. The decorative performance fan is a safe stand-in for a martial arts war fan. These have steel ribs, either blunted or pointed. The inside bottom rib is essentially a knife with a razor-sharp cutting edge. For example -- 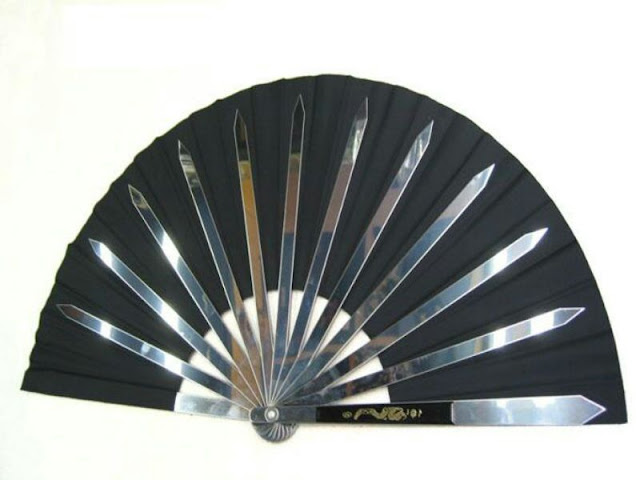 The Tessen ("iron fan") was created by the Samurai warrior class in ancient Japan, so that they would never be unarmed in situations where their swords, bows or spears could not be carried. A decorative folding fan (Sensu) was an expensive status symbol among the feudal Japanese upper class. Everyone had one, both men and women, so a fan tucked in a waist sash was above suspicion. If attacked, a Samurai could defend himself with his war fan.

Here's a couple of short videos showing how war fans are held and used to inflict damage. The demonstrator is, of course, using a safer performance fan to illustrate the moves. All these same grips and strikes are used in tai chi fan routines as well, although in much slower motion.

My next post will be about the actual tai chi fan routine. And yes, there will be a performance video! Not of me though, LOL, but of a tai chi master.

I love this! Lethal beauty, huh?
Those fans are gorge!

What a nasty man.

I had no idea there was such a long history to those deadly fans.

whoa! who knew something so pretty could be so deadly if used the right way!

Incredible that something so beautiful could be so deadly!

Some of the characters in the books I've translated had fans made of electrum which werewolves and other nocturnal demons hate :)

This is so cool, I have always been interested in this,, you’re teaching us so much!

I could use a war fan.

I did not know this! O.O

This is so cool!

Who knew! This is very interesting. No one would ever know such a lethal weapon was in a beautifully simple thing as a fan.

Marie Smith took the words right out of my mouth!!

Cool! Something rather ordinary can be something so lethal!

Hello Debra, A friendly little sport you have taken up! I wonder if Jet Li ever used a weapon-fan. It sounds right up his alley.
--Jim

@ DEZMOND -- Electrum? Fabulous! I'll add it to the list of other favourite sci-fi/fantasy super-substances like kryptonite, adamantium and vibranium!

Love those fans - I used to have two beautiful fans that were left to me by a relation when I was a child, but I have no idea what happened to them or where they are now.

Fascinating post. I knew almost nothing about these fans. The videos were neat. I look forward to your upcoming post.

Not sure if the war fan can be of any use in the street. This is the Krav Magaer talking, I am skeptical of martial arts.

Unless you played Mortal Kombat.

Could come in handy.

I love this post. Thank you for sharing this.

OK, I'm outing myself as a massive dork, but one of my favorite anime characters of all time has an iron tessen as a weapon. Later it got upgraded to a diamond tessen when he leveled up (I have no idea how that would work, don't ask me. It's anime logic:D )

But I have always wanted to learn more about tessens and war craft. Thank you for sharing!

Could be a training video for James Bond movie assassins.

@ Rommy -- With your love and knowledge of Japanese culture, I suspected this would interest you! Glad that it does!

WOW! Who knew?! Well, I guess you did. That is absolutely fascinating! xo Diana

So cool, Debra! I had no idea that fans were used for defense! Thank you for enlightening me. Darn, I was hoping that you would do a demonstration!

Aw, come on! Post a video of you doing a fan dance! Hubba hubba!

Interesting..I was totally disappointed that there was no picture of you doing a fan dance...Is there hope in the future??

So elegant and yet so potentially ruthless.
Very cool.
Thank you, Debra.

I need a blinged out fan.

Not a performance by you? I was looking forward to that. Perhaps some day. I wonder if there pro-fan and anti-fan people?

Mind blowing! I didn't know there was such a thing.

This is really fascinating. Better than boxing and probably more deadly.

WOW I had no idea a fan could be so lethal. The ones in your pics are beautiful. I have two, one in my handbag and the other at home, for when I have hot flushes!

These fans are just as fascinating as the routines! Love this!

This is amazing Deb! Thank you for teaching us! I love the videos!!