The Gnome Has A Name! 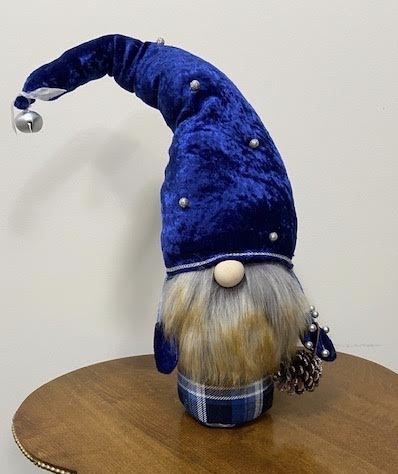 Remember this little guy who needed a name? My sister enjoyed all your suggestions posted in the comments, especially "Conehead the Barberless" and "Ima Gnome." But she remained undecided.
So before choosing a moniker, my sister focused instead on what her gnome's job should be around her abode. As you know, gnomes must have an important "official household task" to perform in order to keep them busy, so they won't simply run amok making mischief.
My sister informed me that, unlike MY gnome, HER gnome won't just be "guarding any old throw pillows," but will be a valued assistant in her favourite hobby -- solving crossword puzzles, code breaking games, and armchair detective challenges.
As soon as she decided on the gnome's job, the perfect name came to her! My sister is a big fan of the Belgian TV series Professor T (Professor Teerlinck) broadcast on PBS. "The ORIGINAL series, not that crappy British remake," she advises. "That's a VERY PALE IMITATION." I watched the British version (also on PBS) and, you know, it is a perfectly fine and entertaining series. In that one, Professor T is renamed Professor Tempest.
Are any of you watching Professor T (original or remake)? Here's a short intro to the Belgian series --
And just to be fair and even-handed, here's a promo for the British remake --
My sister's gnome will need great brilliance and detective skills to perform his job, so my sister has named him after her beloved Professor T. Say hello to --
Teerlinck the Tenacious!
Posted by Debra She Who Seeks at 04:00

I was gonna say call him "Cluesy," but Teerlincjk works, too!

Hello Debra, Your sister showed tenacity in her quest for a name for that gnome. Most people don't put that much effort into naming a child!
--Jim

OMG love the gnome.
Love the name.
And I think I'm going to like this series! I'd go for the Belgian one.

She really took her job seriously there. Does he approve?

That series in not on PBS here to my knowledge. Great gnome name though!

What a brilliant name. I hadn't heard of Professor T before.

I watched the first episode of the British version of Prof. T but decided that it really wasn't for me.

A busy gnome is a happy gnome.

I hadn't realized there was a downside to keeping a gnome--that you have to keep him busy or suffer the consequences. Have cancelled my order for a gnome of my own.

That’s perfect. And now I need to see if I can find Professor T, the ORIGINAL series, not that crappy British remake! I love Teerlinck the Tenacious.

Mr. T Gnome has his job description and a new home! Another case solved!

I love this so much. So interesting to learn of your sisters' hobbies/interests. I've not heard of either of the shows and that is something else I love about your blog: You open my eyes to things I've not known about.
Professor T looks really interesting in both versions.

A perfect and inspired choice!

I can get to Professor Teerlinck through PBS Passport but it looks like it only has English subtitles. Professor Tempest is available on regular PBS access.

A new name for gnome and a new show for ME!

Perfect! I will have to check out that show. Have a good week.

Awesome that mr. Gnome has his new name! And after a character from a TV series made in my country, that's so cool! I didn't know there was a remake in English! I bet our series is waaay better lol (haven't seen it - yet). I wish Teerlinck the Tenacious a wonderful life at your sister's. :)

EXCELLENT Name!!!! It's also very nice to hear SOMEONE besides myself watched Professor T, the Belgian version. Brilliant tv!!! I did a post on the show once to see if anyone had heard of it. And Koen De Bouw was spectacular in it and got my kitty purrring. The British version...meh. It breaks my heart to say that too, as much as I love and adore Frances de la Tour

@ Mistress Maddie -- My sister will be THRILLED to read your confirmation of her opinion about the Belgian versus British version. She and I both adore Frances de la Tour as well, though.

Great name! I'm glad that your sister deduced the Gnomes name herself. That way she can know it's the right one.

I'll to give the show a look. My friend Lisa loves detective shows and we've watched a LOT of them this past few weeks... (Have you seen the show 'Guilt'? Also on PBS passport here in the southern realm. It's really good! Only 4 episodes, so not a big commitment.)

Your sister chose a great name for her gnome! I'm in love with the Belgian production of Professor T. too -- that Koen De Bouw is rowrrrr, LOL! I've been watching the original show on PBS Detroit for 2 years and there's only 5 more episodes until the big reveal at the end.

I'm also curious about your mysterious sister with the wicked wit... is she a lawyer too? Perhaps a Crown Prosecutor???

@ e -- I've seen "Guilt" advertised on PBS but haven't been watching it. Thanks for the recommendation -- I can catch it on PBS Passport too!

@ Tundra Bunny -- My sister will be overjoyed at there being yet another Professor T fan (Belgian version)! However, she forbids me from revealing her profession. Something about ". . . then I'd have to kill you, blah blah blah." That probably means she's a spy. But you didn't hear it from me!

Sweet Debra, thank you for your loving support and comment last week on my blog. ♥♥ Lots of love in our little community! ♥

Love the gnome, gnomeatter what you call him

Interesting name. I didn't realize gnomes are like border collies and must be kept busy with a job. I haven't watched Professor T but I have PBS Passport so I will give it a try.

A great and meaningful choice by you sister, Debra!

Perfect. Unless she has cats. Then Purrfect.

Never heard of the show, but the name seems to suit the little guy.

Gnomes seem vaguely European to me, so a Belgian name is a good choice.

That show reminds me of the underrated Elementary, a modern-day retelling of Sherlock Holmes starring Johnny Lee Miller. Not as well-known (or as well-praised) as the one with Benedict Cumberbatch, Miller plays a very OCD and occasionally hostile Sherlock, and he's great.

@ Kirk -- You're right, that's a great show too! Johnny Lee Miller is outstanding in it!

Good name. I enjoyed our version of Prof T.

Great name! I will definitely check out Professor T if it shows up on one of our streaming apps. Occasionally a great PBS program gets added and this one looks like the witty, quirky style that I love.

Welcome to Teerlinck the Tenacious! Long may he stand guard.

The show looks good- I'll have to search for it. thanks

Did I suggest a name for that gnome? In any case: cool, you've got a gnome just like me!