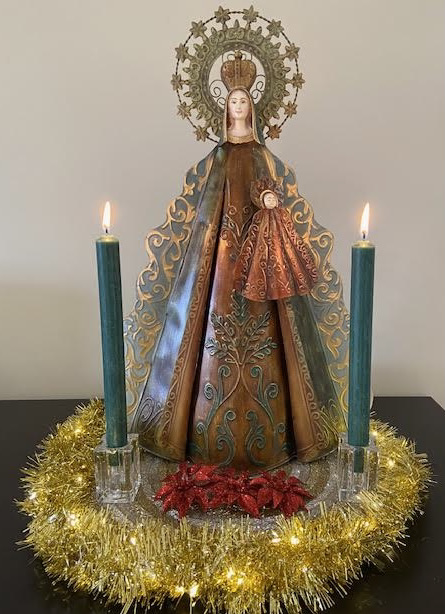 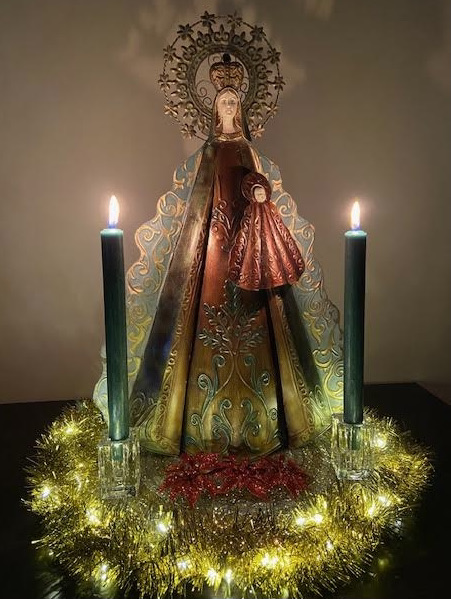 My December full moon altar honours Mary, the mother of the divine child born at Christmas. In Christian doctrine, Mary herself is denied any divine status but, in reality, her roots lie deep in untold millennia of pagan goddess madonna mythology. The mother goddess who gives birth to and sustains all life lives on in Mary and her imagery, no matter how much modern patriarchal religion insists on diminishing her divinity.
In this representation, a crowned and royally robed Mary is depicted as the Queen of Heaven and Earth, an ancient attribute and title of the Divine Feminine. Her child is present but there's no mistaking who's the central figure and star of this show! 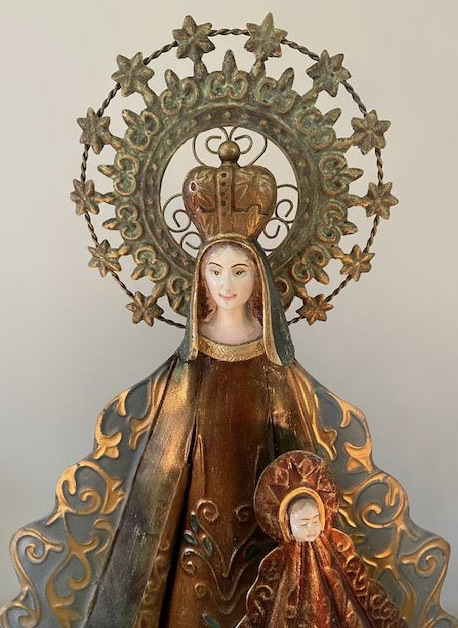 This large and beautiful statue is made of pressed tin, except for Mary's head and the child's face, both of which are porcelain. The statue's design strikes me as very European in nature. I bought it about 20 years ago at West Edmonton Mall in the American furniture/home decor store called The Bombay Company.
[Photos © Debra She Who Seeks, November 2022]
Posted by Debra She Who Seeks at 04:00

Yay for Mary, the Divine!

You must have a storage room solely dedicated to your collection of statues and shrines. This is another beauty. I used to love Bombay Company. I was thinking today I need to move on from the Judaeo-Christian traditions (which I don’t believe in) and start celebrating pagan traditions.

Oh, I love that statue!!!
And I think Mary has been put through the wringer both by catholics and by protestants. So much to her besides being a parent....

Wow, she's beautiful! Thank you for giving Mary her due!

Coming from an Italian background, I can appreciate the traditions that honor Mary. The "Ave Maria" is one of my all time favorite Latin hymns.

I found a high honor for you yesterday. Your blog is blocked by the wifi network in the the Spanish National Train network, with a message that read, "we don't allow that kind of content." It must be the cats speaking up for themselves.

gotta love that bombay co.! they had everything.

@ Travel -- Wow, yes, I am honoured indeed! How can I add "As Blocked by the Spanish National Train Network Wifi" to my blog banner? I wonder what is so objectionable to them about my innocent little blog? The LGBTQ content? Paganism? Bad language? Making occasional fun of Jesus? Actually, I suspect you're right -- IT'S ALL HRH'S FAULT! AS USUAL!

@ Travel and @ Debra She Who Seeks -- Oh, sure. BLAME THE CAT. You people are SO PREDICTABLE. Why am I ALWAYS a VICTIM of ANTI-FELINE BIGOTRY? WHYYYYYYYY?

This is really beautiful. Have a lovely day today.

After all those heathen altars it is nice to see you adopt some wholesome Christian imagery, even if it is rather Papist. But "untold millennia of pagan goddess madonna mythology"? No wonder the Spanish National Train Network Wifi blocked you. You were probably flagged for misinformation. (I seriously doubt it was HRH. As if anybody pays attention to HER?)

@ Old Lurker -- I wish you a very merry, holy and devout Christmas. I can't speak for HRH, of course.

@ Old Lurker -- EVERYBODY pays attention to ME! How dare you suggest otherwise? But I don't hold GRUDGES, so I wish you a Merry Christmas too. May Santa fulfill EVERY SINGLE ONE of your kinkiest, most fetishistic sexual desires, so long as they're legal.

The Spanish National Train Network Wifi blocked you?! I'm impressed. Of course, if they got to little ol' you I'm sure it's a long list of blocked sites. I'm sure you're in good company. I wonder how I check to see if I'm on the list?

@ Mike -- Just hop on a plane, go to Spain, travel on a Spanish train and see if you can access your blog! Easy peasy lemon squeezy!

It is so calming and peaceful

Your statue of Mary is a work of art and I enjoyed this post. I used to shop in a Bombay Company store, which is closed now. Mary is important to me.

Well, Debra, even bad press is good press -- remember what happened to sales of al-kee-haul during Prohibition!

Oh, HRH, you POOR thing, I feel SOOOO sorry for you. If you didn't whine and bitch all the time, how would we even know you're around?

That's an honor, to be blocked by whoever it is in Spain! You must be doing something right. Interesting to be honoring Mary. I like the prayer that lists all her titles, wonderful array. And of course it's an archetype for the eternal mother. Lovely statue there.

If Mary really existed, they would have stoned her ass before Jesus could be born

Sad that the precious thoughts of some are hated by others.

She’s beautiful and you can feel the love emanating
What a lovely alter.

It's a beautiful statue, I like the way it looks after the room lights are turned off.

It is beautiful.
the Ol'Buzzard

What a lovely statue!

This is a beautiful altar and statue, love it! Blocked??? Congrats! ;D

She is so lovely and, yes, the Star of The Show! I remember The Bombay Company!!

Whew! For a second there I thought you had capitulated to the patriarchy! Ridiculous, of course, since the Divine Feminine is one of your touchstones. That is a lovely representation of the Mother, she wears her crown so well.

One of these days I'd like to read "Madonna" without envisioning the one that's -ah,hm- "like a virgin."

PS These are exquisite.

A gorgeous, gorgeous altar, Debra! Don't get me started on patriarchs, religious or otherwise. I think "man"-kind is afraid of the poser of women.

There's actually three Marys in the New Testament. Mary, mother of Jesus; Mary of Bethany, Lazarus' sister; and Mary Magdeline, who witnessed a walking, talking, posthumous Jesus. That's why I figure there must be some (nonsupernatural) truth to the story. A fiction writer wouldn't give so many characters the same first name which then could confuse the reader. That only happens in nonfiction, where the writer has no other choice.

As for Mary being ignored, well, I grew up in a heavily Catholic area. Do you know how many gardens I've seen that has Mary blessing the daisies and petunias? One of the main differences between Protestants and Roman Catholics is that the latter group DO venerate Mary. Sometimes, it seems, at the expense of Jesus. After all, it's not Jesus that Bernadette and those three kids saw (or think they saw) at Lourdes and Fatima.

Let me end this with the Old Testament. Moses' sister's name is Mary--well, actually Miriam, of which Mary is a variant. That Mary/Mariam is a prophetess. The supernatural would seem to run, if not in the family, at least in the nomenclature.

I love this, the story behind the story is always more interesting.

that statue is gorgeous and i love how you set up your altar.
love & magicks
~*~

She was a revolutionary character!

Teenage Immigrant Welfare Mothers on Drugs is the song i offer to this altar. I think Mary would understand, and sometimes this is all we have.

At the full moon I saw it occlude Mars.

Wow, this is gorgeous! And I love what you wrote.

Those are lovely figurines of Mary. I enjoy your shrines. You know so much about each one

This is lovely. A nice Christmas altar. I am not a christian but definitely can believe in the divine feminine.