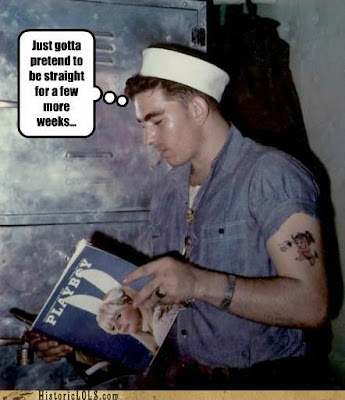 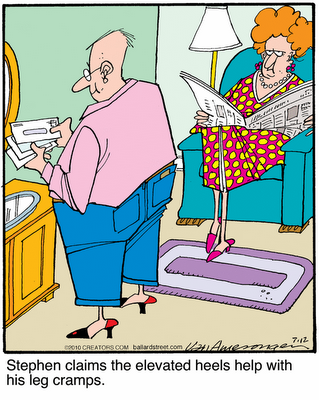 I love these, especially the Twin Bed store.I now know more gay men who used to be married to women, than ever before.

Ha ha ha... I love the one about the twin bed store!

isn't that why twin beds were invented?

Isn't that called a "lavender marriage"?

straight to the twin bed store - too funny!

There's a big gay pride parade here in the city today. Wondering if you are able to catch it on television up there?
Mary

the last one is very practical!

I love the vintage type cards. Of course, yours have a twist to them! Gary Larsen makes me giggle every time. Just look how cute his shoes are! Wishing you a DeLovely Sunday.
**kisskiss** Deb

This is too funny! Do you save these up all year just for June??? Hahahahaha!

LOL, I don't think Stephen's wife is buying that for a second!!

The marriage ones remind me of my aunt's friend. She had this friend who was not a beauty, some would say she was "unfortunate looking." She was well into her 50s when she met a doctor from Australia who was gay, but whose family and social acquaintances would not be accepting of his nature. So he proposed to my aunt's friend. She would be his wife and never have to work or worry about financial problems ever again, but she would have to be his wife and behave as such with no indiscretions, while allowing him to have his affairs. She accepted and although she sounded very happy, I wonder why people have to pretend to be someone else just to be able to exist.

Ah. The twin bed one explains so much about early 60s and late 50s television.

Giggle, giggle... wherever do you find these funny things?

He's welcome to my share of those elevated heels!

I love that last one! Stephen could just be an executive transvestite, you know.

LOL, love these so much I had to visit bluntcard myself :)

Very funny! Love them, especially the twin bed one!

I Love my gay men!

twin bed...hmmm...that may explain the second husbands lack of interest in sex.

Love straight to the twin bed!