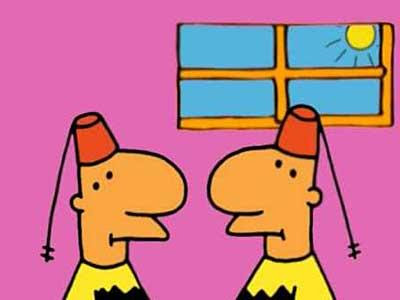 Long before he invented The Simpsons, Matt Groening created an ongoing comic strip called Life in Hell which has been syndicated in many alternative newspapers since 1977. The strip also generated a lot of books and calendars during the 1990s.

Life in Hell was one of the first syndicated strips to feature gay characters. I've always loved this cartoon's crazy couple, Akbar and Jeff, with their matching Charlie Brown t-shirts and red fezzes. As Groening explains: "Akbar and Jeff are either brothers or lovers -- or both. Whatever offends you most, that's what they are." They fight constantly but always end up skipping off together holding hands.

But alas, the alternative newspaper biz is not what it used to be. Due to an ever-shrinking number of publications, Life in Hell is officially ceasing production in mid-July after 1,669 installments.

So farewell, Akbar and Jeff, as you skip off together into the sunset! I'll miss you boys!

I'm not familiar with this comic,

ah, they would be cute if they weren't so ugly looking :)

I had heard that this comic was going to cease. Sad. I enjoyed them as well.

Never heard of this comic, but I am sad if you are sad.

I'm not familiar with this comic, but I think this goes for all newspapers...what with the age of news on the computer.
Mary

How sad! I remember I was really into that comic back in the 80s and 90s. At least I have one of my life in hell books at home to comfort me.

I've never heard of it, but you gotta love Groening for his remark: "...Whatever offends you most, that's what they are." :)

Well A and J will just live on in all their humour gaiety!

I've never heard of this comic strip before. "They are either brothers or lovers"... for some reason that made me think of Bert & Ernie.

Awww :'( "Life in Hell" was a favourite high school read of mine - suited my twisted attitude just perfectly!

How did I miss out on this?
I hate making grand discoveries at the end.
oh well....

dang, just when I find them they're gone..sigh*

Damn! End of an era.

You know,it took me a long time to figure out that Jeff & Akbar were a couple. I thought they were brothers, seeing as how they look so much alike. Now I find out I was right both times! Hooray!

I love Akbar and Jeff. Too bad it is ending but one must know when to leave the party.