The True Nature of Gaydar, Part 1 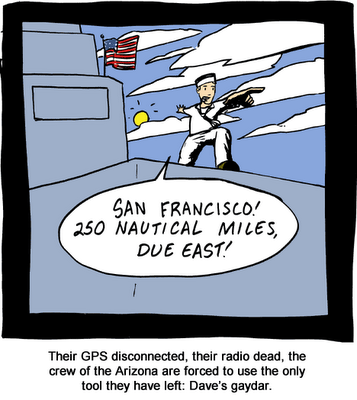 Is gaydar an inborn sixth sense or is it simply a learned skill? I've experienced it both ways in my life.

Long before I was consciously aware of being a lesbian, I unconsciously attracted several close friends who also proved to be latent gays and lesbians. Without being at all aware of our shared true natures, we were instinctively drawn to each other as friends. Our gaydar was like an inherent homing device, ferreting out others of our tribe before we even knew that we had a tribe! And ultimately, we all came out of the closet more or less at the same time.

Once I knew myself to be a lesbian, however, this instinctive gaydar faded and today only shows itself as an occasional intuitive feeling. After I was out, gaydar changed to being a practical and precise learned skill that I had to acquire to function in my new world.

More on that tomorrow!

hmmmm...interesting. my gaydar is very fine tuned. am i missing something about myself? hehe!

You know that theory that major events in the future send ripples into the past just like a stone drpped into water causes ripples to flow in all directions? (Meant to explain ESP.) Maybe that is how we 'sense' things. Anyway looking forward to your next post.

I like to think I have a decent sense of gaydar, but every once in a while it'll surprise me. Like my brother-in-law. He's a big burly guy, he doesn't lisp, he doesn't wave his hand and say cliched things like 'oh sister' or 'gurrrrl,' he's just your typical guy. Not effeminate at all.

Then there's one of his friends, who lisps, calls everyone his 'gurrl,' wears bright pink, and was Tinkerbell for Halloween.

...That one really doesn't take gaydar to decipher.

I have a good gaydar I think I developed because of the area I grew up in...can't wait to read more tomorrow, Debra.

How very interesting, I've often wondered about this exact subject! I look forward to your next post.

my understanding, from what i'm told by gay friends, is: gaydar varies from person to person, as well as day to day....

Interesting!!! My brother-in-law came out after 20 years of marriage to my eldest sister. It was difficult to be gay in the 1950s... I never thought Mike was gay, he must have buried it deeply. Sadly, he came out in the early 80s, a very dangerous time. He died in 1994. My gaydar has usually been pretty keen, I'm so glad we live in a more tolerant time now, so people don't have to live a life that isn't true to them. :) My other brother-in-law is married to his partner, but sadly we are the only ones in his family that know. Husband's mother still thinks they are roommates at ages 62 and 67! Have a lovely day. [Isn't the gypsy caravan the best thing ever????? I'm still smiling!]

Although I am straight (not narrow), my husband can never believe my gaydar. I did see a story awhile back about this being scientifically proven!

Some people say gaydar doesn't exist, but I used to have fail proof gaydar. Once I became a mom, my focus shifted and with that went my sense of a lot of things including my gaydar. Over the last couple of years; however, it has come back.

I consider it a way that my spirit is guided to people who are like me and my family. I agree with the idea that it's more like a homing devise or a beacon in the fog. :)

This is the first time I've heard this term 'Gaydar', and of course I had to look it up. Sounds very interesting! Looking forward to your next post. I always enjoy learning something new - and interesting.

thats a new term for me too, I will be completely honest here because you have been, I never even heard the term gay until I was in my late teens.We had uncles and aunts that were gay, but I never picked up on it until my teens and living in rural Northern Ontario , it wasn't really discuused.My first meeting with an openly gay female relationship was when I was cooking for summer residents on a beautiful island on Lake Huron, wealthy American couple, with lots of company, I was asked by their family who I cooked for if I would also cook for them, the older cooks in the area would not, the three weeks they came were the best , it was a wonderful education for me, I learned to respect and not judge, my final take on it was (pardon my ignorance) the only difference between gay and straight is sex, I don't discuss my sex life with anyone and why should they, so whats the big deal right, I know this is probably an idiots evaluation but there is no Gay for Dummies, I'm just glad that soceity is coming to their senses , slowly , all people are equally imporatant for this earth to run smoothly, gay straight and everything in between. Sorry about the lonnnng post but I have strong feelings on this, it hurts me so to see my daughters gay friends still treated badly on occasion,

I grew up with reallly old parents, born in 1919, and until I was in my teens thought gay was simply happy!

Just like Spidey's tingling senses...I knew I was gay, but not in those terms way back when...1973 is our year and that's when it all made sense!!!Ron

I went thru a large part of my life not knowing what gay meant or what a homosexual was..when I found out I realized I didn't care..I still loved Monty Rock III even if he was gay..
I'm not sure I have gay-dar..and hope I don't ..so I can like them just because I do..

My gaydar is terrible. I've flirted with several gay men (who, in hindsight, seemed to be having too much fun teasing me) and had two girlfriends finally say "you seriously didn't know?" But then I've also had two boyfriends who nearly had to conk me on the head and drag me back to their cave before I realized they liked me. I'm a bit clueless.

Although mine is exceptionally rusty at times (usually find out through casual conversation about other co-workers who are, which doesn't bother me one iota), it is interesting to see it at work through other people.

I had no idea I was gay till I was in my 20's!! I knew I was different from other guys but not exactly how different.
My gaydar is off and on most of the time. Just ask my niece who tried so desperately to 'let us know' she was a lesbian but we didn't 'pick that up' at all!!