The True Nature of Gaydar, Part 2 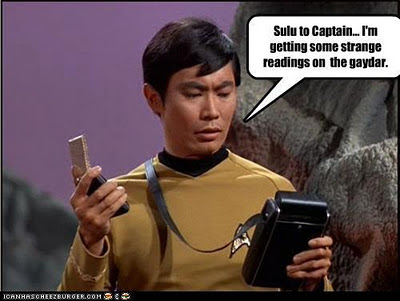 When I came out in the mid-80s, people were much less open about their sexual orientation than now. Today if I want to know whether someone is gay, I simply ask them. But in those days, you had to first use your learned gaydar skills to determine if it was safe to inquire or even hint at such matters. So if you hoped or suspected that cute woman over there might be a lesbian, what kind of indicators did gaydar scan for? Different gaydar clues were taught and learned by word of mouth from one lez to another, such as:
None of these factors were determinative in and of themselves but the presence of several might be significant! Oh, the endless hours we spent trying to figure out who might or might not be a lesbian! It seems so silly now.

But of course, in some parts of the world, proficiency in the learned ways of gaydar is still a crucial survival skill.

During the early 70s when I was at university and the women's movement was at its peak on university campuses I remember lesbians wearing big buttons identfying themselves. No gaydar needed in those early days...

I have heard of the short hair thing, but short nails and pinky ring are new to me.My nurse practitioner is the most girly girl woman you will ever find and her partner is as well, I suppose they are exception to the rule, ha ha

When I was at university the lesbians I got to know all sported really short hair and never wore make-up. A lot of them also wore blokey clothes. Looking at some of the crazy perms I had in those days,they still looked better than me!

I must have left a lot of mixed messages out there in the 80s! Lol.

That list you made makes sense. I'd have to think back to my college days to see if anyone fit that profile. Your last sentence is rather disturbing. It reminds me once again that there are people around the world that don't enjoy the freedom and safety we take for granted here.

Perfect photo! :0) When we lived in the "Buckle of the Bible-belt" (aka - Arkansas) a person would use all those clues because no one would dare speak the G or L word out loud.
Still love that word - gaydar! :0)

The pinky ring is a new one to me - also, owning a cat...! A couple of lesbians have lived two doors over from me for years - they ride motorcycles, are very muscular and have dogs. It must be really hard in repressive countries.

It was pretty bad here in the city in the 1980's. A lot of violence as they fought for gay rights.
Mary

Hmm. I don't wear makeup, have short fingernails, and have always had at least one cat. Maybe Mr. RK should worry? ;)

Until I became a married mom people *always* assumed I was a lesbian. I am as straight as an arrow (but have always supported the community and had gay/lesbian friends) but I never understood why I was always assumed to be a lesbian. But I did have...

1. short hair, no makeup
2.a thumb ring, which I was told was supposed to be a signal... I never knew, lol!
3. plain and functional clothes, not lace or ruffles (I was a Alternative/Goth chick who liked ill fitting concert shirts more than anything).
4. has a cat (or two, or three...)

But most of all my very best friend in my 20s was very "butch" (dressed in flannel, work boots, etc) and we were always roommates so everyone assumed I was the "pansy to her butch". The thing was, she wasn't gay at all... she just seriously liked to emulate whatever guy she was crushing on at the time - to the point of dressing like him.

Isn't it amazing how far things have come in the past three decades? Now (for the most part) people don't really need to rely on these sorts of "clues".

Maybe a girl keeps her nails short to play the ukulele. :)

I think that in today's world, especially where I work (state guv'ment), the stereotype that those clues might apply to simply aren't there anymore.

Those clues fit a lot of people I know, including myself, at times. I am straight, but I wonder if I ever gave off gaydar signals. Interesting post.

or...Is she one of Dorothy's friends? That was hard everywhere.

Geez! I could be a lesbian!

I've never heard the pinkie ring one before!

This was great, Debra. I didn't know about the pinky ring either =)))

i like women, exclusively... i KNOW i'm lesbian... father of three :O lol

So glad people just ask now! I must have been on many people's gaydar's back then because I fit the bill perfectly. Love that people for the most part can be more open with others than using secret fashion messages. Oh! Although I never had the chance to have a cat. Reg is allergic!

Now I'm worried because I have 2 cats, have short hair, wear plain clothes, have short nails and I divert attention away from myself!

All of those details were me in the 1980s, and I think I frustrated many a lesbian. However, they became my friends, despite my own personal attraction to men, and I'm happy to say those lesbian women are still my friends today! So glad it's no longer a guessing game, though, for the gay/lesbian world. (I go to a U.U. Church in New York State, and was happy to be part of the wedding party of two gay men friends. What was funny was when a fire truck drove by during the picture taking session on the front lawn. They honked their horns, and several firemen were rubbernecking, eyeing the wedding party. I think they were looking for the bride, and couldn't find her.:))

Oh, I must have sent a few gaydars beeping with short hair, no makeup and short nails.

During high school days we always assumed that any girls who played football were gay.

Hmmm...most lesbians I know own dogs.

Most of those clues fit me too but I never got hit on by a girl until a couple of years ago and she was very very drunk!