The Buddhist bodhisattva Kwan Yin embodies the Divine Feminine. She is the Goddess of Compassion -- her very name means "She Who Hears the Cries of the World." Beyond this characteristic, however, Kwan Yin is a much more complex being. 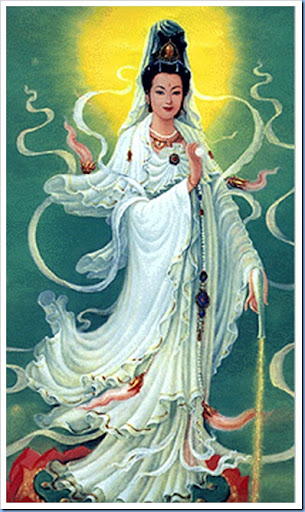 Kwan Yin originated in India as a male deity and was brought to China in that form. Ancient representations of Kwan Yin often include a pencil-thin mustache and a small goatee. But because compassion and mercy were categorized as "feminine" virtues, portrayals of Kwan Yin got progressively effeminate over time as artists tried to capture that essence in their work. During the Song Dynasty (about 1000-1200 C.E.), Chinese artists just threw in the towel completely and turned Kwan Yin into a woman. 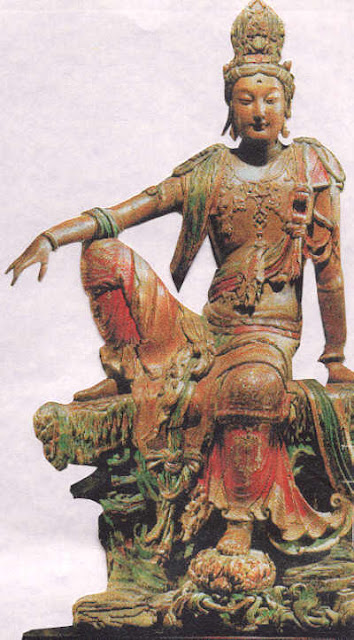 So today Kwan Yin is a willowy figure in a flowing white dress and veil, with the hairdo and jewelry of a beautiful woman. But, in recognition of Her male origins, She is always portrayed as completely flat-chested. Unlike virtually every other representation of the Divine Feminine, there are no big breasts for Kwan Yin! She is the most androgynous of all spiritual beings.

Her journey from one gender to the other mirrors the transgender journey that so many people undertake today. Taking our cue from Kwan Yin, mercy and compassion should always be our response to that most profound of all transformations. It is quite literally a divine journey.

I love Kwan Yin. Such a special goddess.
Mary

that was interesting, Debs

What a beautiful and spiritually uplifting story.

You have answered a question that I had not yet investigated. I have a wonderful Kwan Yin soapstone statue that was bought in China as an antique in the 1870's by a relative of yore. She has a mustache and goatee but very beautifully dressed as a female. All my life I wondered why the facial hair? Now I am even more proud of having this statue. Thanks for the info. Oma Linda

Interesting stuff! Thanks for sharing!

I've always loved Kwan Yin and knew that some of her incarnations were male but this is really fascinating what you're brought up, Debra.

I love the name!I really feel for people who want or need to undergo the process of changing their sexual identity. It must be one of the most difficult transformations to experience.

The most beautiful of your blogs, Debra. May she watch over all transgendered people.

This is great info and a deity whom I hadn't know of. Thanks for sharing - I love the spiritual messages and those gorgeous pics. I have a tiny Green Tara on my kitchen window sill- she inspires and encourages me when I have to wash the dishes :)

I didn't know that..too bad they couldn't make the deity both male and female.

Lovely post! I have a stunning Kwan Yin statue that I love. She's a wonderful goddess.

Yes. I had a Chinese neighbor once who told me the origins of this amazing Goddess energy.

I am hoping her energies will support my daughter through her up coming birth experience.

Debra, I have always been so interested in transgender studies and how our two-gender society is limiting to the infinity of genders that are born everyday. Over 2% of births in the US are intersex or not clearly male-female as defined by the medical society. I read a book called 'The Zuni Man-Woman" which talks about the Zuni tribe in New Mexico that allowed for 3 genders. I think you might enjoy the read.

Do they now call those "queens" and "divas"? Or Michael Jackson?

And I thought she was just going through menopause and growing a few stray hairs!

Seriously though, that was really interesting, thanks :)

That is so fascinating! Thanks!

Kwan Yin is one Goddess I often channel. She is close to my heart.

All we need is mercy and compassion. Imagine the power coming from that!
Great post Debra.

I always learn such interesting info from you! I don't get hung up on gender. I believe our souls have no gender because you need a physical body with sexual parts. Since the soul has no body, gender is a non-issue. Love this info about Kwan Yin!