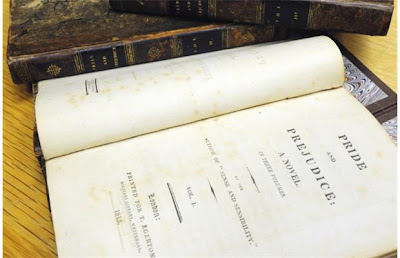 When Pride and Prejudice was originally published in 1813, it was printed as a set of three volumes. A mere 1500 copies of the novel were printed. Today, one of these first edition sets can (depending on its condition) fetch prices ranging from $78,000 to $220,000.

And the University of Alberta in Edmonton possesses one of these valuable sets! It is kept in the Rutherford Library's climate-controlled and security-protected Special Collection branch. 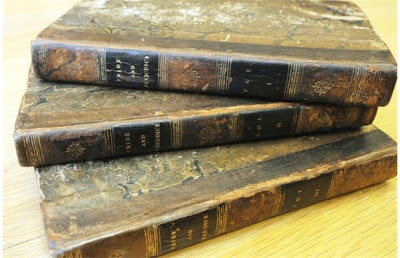 But here's the kicker! Until 25 years ago, no one at the university actually recognized these volumes' value or rarity and so the first edition copy was just sitting out on the regular library shelves, available for circulation like any other book. As an article in the Edmonton Journal recently reported:

You can still see [the] glued-in piece of lined paper where librarians stamped the due date. Miraculously, over all those years, no enthusiastic undergraduate nor absent-minded professor ever made a note in the margins, underlined a word, or damaged the spine.

Or, it goes without saying, ever stole it, sold it and kept the proceeds for themselves. Think of the student loans it could have paid off . . . or the monster blow-out frat parties it could have financed!

No one knows how the university came to own this valuable asset. Somebody probably just donated it early in the university's history when the library was trying to build its basic book collection.

Tomorrow: There is Only One.

Amazing someone didn't realize it was so valuable!

Most people probably plumped for a single-volume edition. I know I would have.

that is incredible!!! As a library-lady myself, I can vouch for the durability of 100 plus year old books. Better quality glue, paper, ink etc. I have a 2nd edition A Tree Grows in Brooklyn... I love it.

mere 1,500 copies? That's the number of copies for most books today in my country :) Even the bestsellers.....

This story makes me want to take a closer look at books in the library. Never know, might spot something very valuable in the back stacks!

Have you tried a different browser. When i used explorer i had all sorts of different problems like that. Chrome made a big difference. Give it a shot!

This could be but the beginning of discovery of OTHER books in those hallowed walls that are worth mucho $$...you just never know!

It's a wonder, how many world class rarities there are, basically on my doorstep. I definitely need to set aside some time to go and appreciate some of them.

Imagine how excited the discoverer must have been! Great story!

Hiding in plain sight, as they say.

Refreshing to hear these stories of items that have intrinsic value for users, unrelated to all the silliness of auctions and millionaire collectors who lock their treasures away in vaults.

Love stories like this (and that story.) It reminds me that the world is fully of treasures if you just look around!

I wonder what other treasures they have, lying undiscovered?!

Talk about a missed opportunity for someone. What is the most one can be charged for not returning a book to the library???

Oh! That is a cool story! I love how it managed to survive like that.

What a wonderful story! I like discoveries of value like this, especially when they were sitting there all along. It's so fortunate that the University has this valued set.

Totally incredible and remarkable! What a great story, Debra! Thanks so much for sharing it.

i have many first edition books... all paperback, and not worth what i paid for em ;) lmfao

That is amazing! Can you imagine having something like this in your possession and finding out that it's worth a small fortune?

That is really interesting! What a find.

That is so cool! I can't believe no one took it, and just paid the fee, saying they'd lost it. Why did I think of this? My brother did that in college, with the reasoning, "No one has checked it out since the 1970s! No one at my school will appreciate this book as much as I do!"

I have an astrology book that is still in its pre-edit stages, signed by the author. May not be worth anything, but I will never part with it.
Mary

What a great piece of info, Debra! The first edition, I'd like to hold it in my hands.

oh, so that's where i left my books. thanks

A local library where I used to live has had books that were about 75-100 years old out on the shelf for general circulation. I'm pretty sure some of them were valuable.

Amazing story. We can literally find treasures in libraries.

WoW! What a story! Odd that no one recognized the book for its true value.
This past weekend, the movie Pride and Prejudice was shown on one of the movie channels. I wanted to watch it, but was outvoted by the SuperBowl! Hrmph! Shoulda recorded it!

I bought the Book of Saints for a quarter from library sale and googled it and it's worth $200 ..and it came from St. Mary's Catholic Church..sigh*..do I give it back? do they care ? do I sell it and split the money? I'm holding on to it for a while.

The best treasures are the ones that are late discovered! Great story!