"A Reckless Dance into the Abyss" 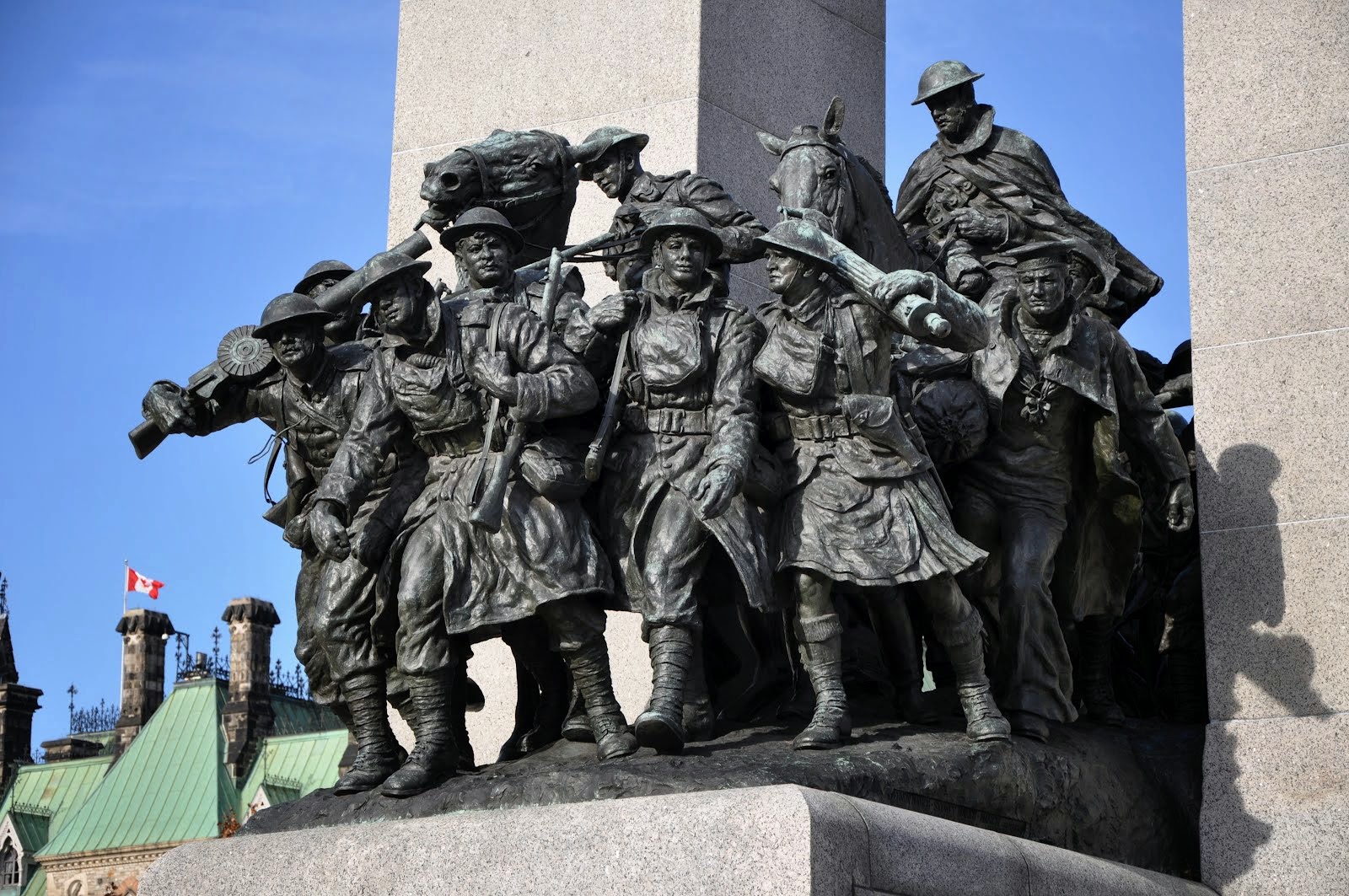 One hundred years ago today on August 4, 1914, Great Britain declared war on Germany, after Germany declared war on France and Belgium. Canada also was automatically at war with Germany, since we were part of the seamless British Empire. With scarcely any diplomatic negotiations, public consultation or apparent thought, the great imperial powers of Europe plunged the world into the as-yet-unknown and unimagined horrors of mechanized warfare and death.

Our modern era began with that "reckless dance into the abyss" as the Great War was called in a recent article by Brian Stewart, former CBC foreign correspondent and current Distinguished Senior Fellow at the Munk School for Global Affairs at the University of Toronto.* He wrote that World War I --


has been called the "seminal catastrophe" of modern times and the calamity from which all other calamities sprang. . . .

The conflict itself saw 16 million killed, including 10 million soldiers, half of whom, it has been estimated, were never found or identified in the sea of mud and craters that the battlefields became.

No one will ever be able to calculate the lifetimes of grief left for those millions of relatives of the fallen, and for those survivors with broken bodies and spirits.

For years after the war, people talked of "the great silence" as the pain lay too deep to be spoken aloud. . . . 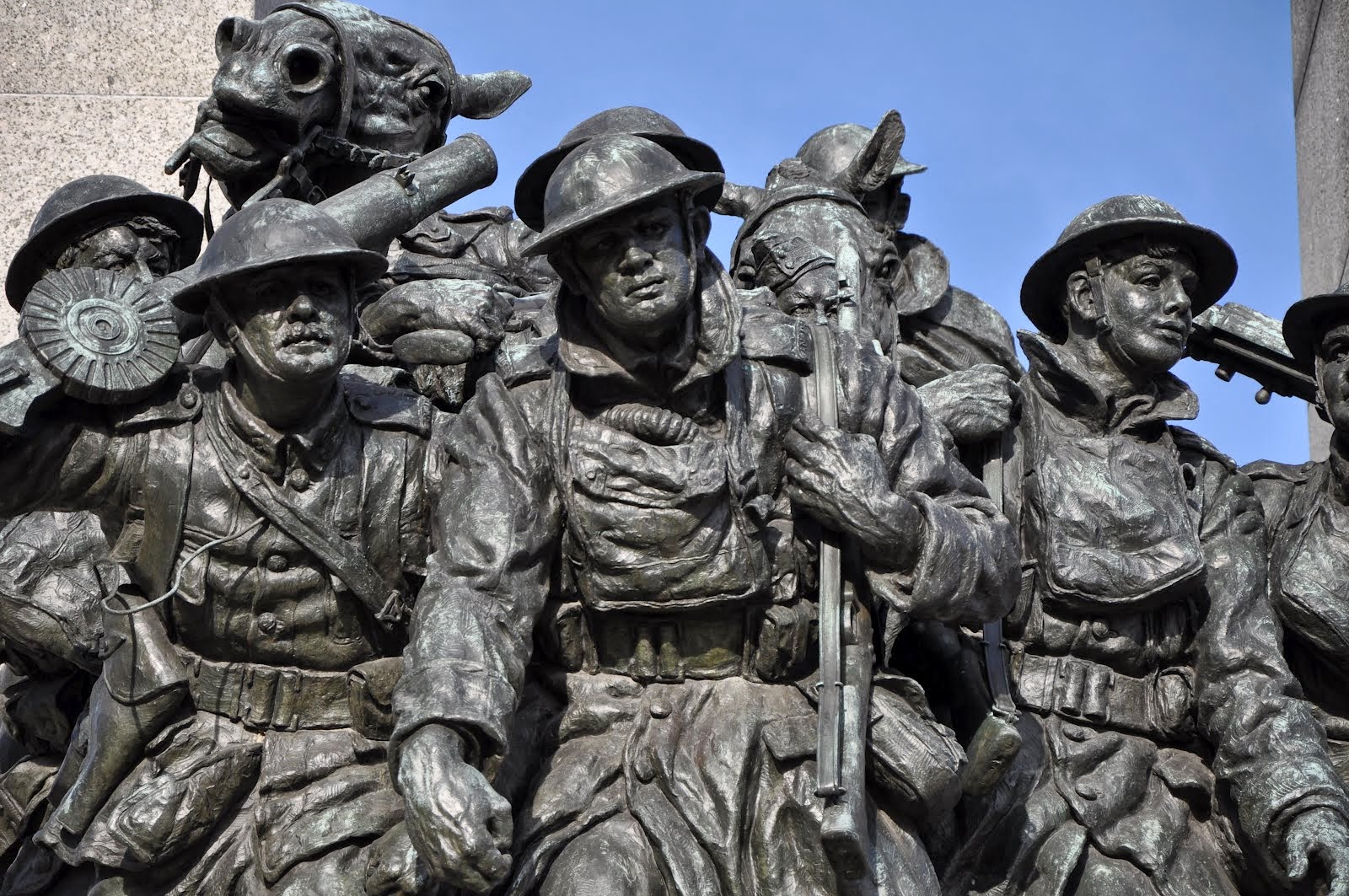 In just four years [the war] collapsed four entire empires — the German, the Austro-Hungarian, the Russian, and the Ottoman (Turkish).

By giving birth to communism, fascism and the Nazis, the First World War was the essential precondition for the Second World War just 21 years later, and for the nuclear age and Cold War that followed.

"It is hard to imagine a worse initial condition for the modern era of which we are the inheritors," the Australian historian Christopher Clark wrote. 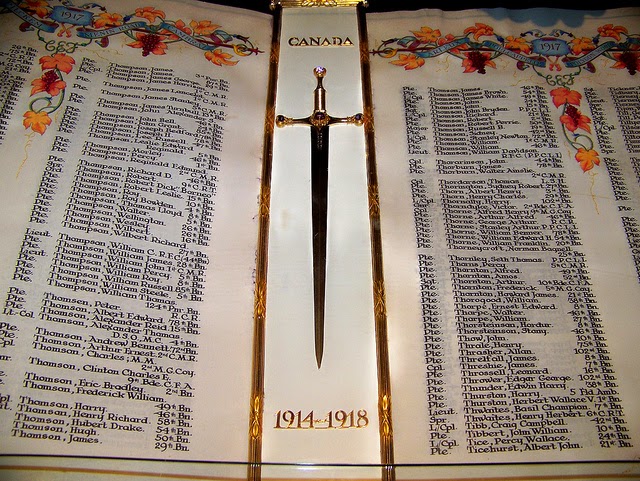 [All photos are from the internet. The first two are of Canada's National War Memorial in Ottawa. The third shows one of the seven Books of Remembrance housed in the Peace Tower, Parliament Hill, Ottawa which list all the names of Canada's war dead.]

My history teacher told us that they called it "the war to end all wars"...when in fact it did anything but.

You don't hear that much about WWI as it gets overlooked as they make countless movies about WWII. I didn't know the death toll was 16 million. Brian Stewarts's description is spot on.

Truer words have never been spoken!

It changed the century, so many young lives wasted. On CBC this morning I heard of a family man from East Canada, who after surviving the war, didn't return to his family but went to live in Boston or something, where he lived alone, a hermit. He left his wife to raise the children alone. Shell shock, trauma. Anyway, sorry to meander in this comment! It's that kind of day... :) Lois

We're marking the event here too, since my country was one of the biggest victims of WW1 with almost 1 million people dead our of 3 or 4 million citizens at that time. We were the least prepared army, but also the army with biggest achievements in WW1.

And the sad thing is that it appears that no one has learnt anything from the Wars.

May they rest in peace, and may we somehow, someday live in peace.

I had never heard that exact perspective before but it is oh so true. May all those souls rest in peace and may we all seek it.

So tragic! I will never quite understand war. It is a waste of energy, resources and human lives.

all those lives lost, so sad, and still war goes on, animals wouldn't treat their species as we humans do, so sad,

Like many have said it was the War to end all wars, but really caused more. I think most of the world conflicts stem from previous wars.

I can't help but wonder about the lives that could have been and what they would have accomplished if they were not cut short at such a young age. Did you have any family affected by that war?

Snark and sarcasm aside today, I learned a LOT from this post. Like Pickleope said, WW1 isn't much talked about. I just realized how little I truly know about it. Lest we forget indeed.

Hi lgsquirrel -- My father's namesake Charles Walker was killed in WWI at Vimy Ridge. I've written about him in 3 poats dated November 2008 under my blog label "genealogy" if you'd like to read his story.

Darlin, have you ever thought of teaching history? I love your little history moments.

Debra.....as a history buff, I have read many books on "The Great War"...... it truly did devastate Europe and changed the face of history forever. Great informational post my girl!

Sadly, we never seem to learn. Never. I like this post. It makes me think... And with everything that's going on in our world right now, I think it would do us good to really THINK a lot more. Then do something about our sad state of affairs. Sorry about that negativity. I'm grateful for all I have. I really am. It's just that sometimes I wonder about us humans.....

An excellent tribute to those lives lost and an important reminder of the cost of war.

i said it before and i will say it again - we must "kill the will to kill," -- buddha. there is just no sense to it. people have to understand and realize that dialogue, compromise, negotiation, gets the job done. cheers!!

Lest we forget. We are going to turn off the light for an hour in fifteen minutes because of this.

I can't imagine seeing one, let alone two, horrific wars of a global scale in my lifetime.

I think if the powers that be knew how many more wars there would be, they wouldn't have numbered them.

I read your post about Charles Walker. That is quite the story and a powerful connection with the past.

War is always tragic. I wonder if we humans will ever get our fill of it? Now that there are so many factors involved in the 'making' of a war, it always comes down to greed and power, and of course the insanity of a few.

As Edwin Starr sang,
War, what is good for? absolutely nothing!

There has been some good radio talks and magazine (National Geographic) articles about WW1. It has been said that the "experts" thought it would be over before Christmas.

Wonderful post, Debra. This was one of the most horrible wars in history (as if there is ever any 'good' war). You think humanity would have learned from it. But we haven't. We decided to have a second world war, and years after that one, we are still killing each other.

War and conflict is the natural state affairs for humans - peace is just the interval in between.

Futures are decided by documented history and winners write the history.
the Ol'Buzzard

So sad, so very sad!

When i think about the both world wars I think about how young many of these soldiers were. It's just so sad considering those who instigate it.. never seem to actually do the fighting.. Just send lives out to be lost, like cannon fodder. and it still goes on. It's a terrible shame
I honour the soldiers who do their duty, and the pain of the families must never be forgotten, but I despair at world leaders