Continuing on with the history of Princess Patricia's Canadian Light Infantry, today's post is about my family's more personal connection. 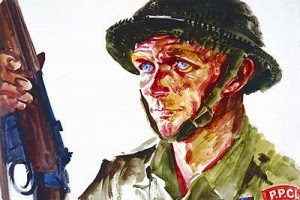 The PPCLI drew its members largely from Western Canada and so when my Manitoba farm boy father joined the Canadian war effort in 1942, he joined The Patricias. The regiment was part of the Italian campaign along with British forces and Patton's American units. They invaded Sicily in 1943 and fought their way up the Italian peninsula, successfully knocking fascist Italy out of the war and diverting as many Axis resources as possible from the Eastern Front in order to provide some relief to Russia. The Princess Pats then became part of the liberating forces of Holland.

After the Normandy invasion, the Allied soldiers in Italy (who had suffered the heaviest losses in the Western theatre of war) were sometimes teasingly called "D-Day Dodgers." This caused much resentment. I remember my Dad still being pissed off about that nickname decades later, LOL!


When he was 21, my father returned from World War II with what would today be easily recognized as a pretty severe case of post-traumatic stress disorder. Of course, in those days such symptoms were dismissed simply as temporary "battle fatigue" which soldiers were just expected to endure or ignore for the short term.

But, undiagnosed and untreated, my Dad suffered from PTSD for the rest of his life. After 20 years, the worst of the extreme symptoms abated so he was no longer wild, volatile, violent or prone to suicide threats. But he remained moody and subject to unpredictable fits of rage for a further 20 years. The last 20 years of his life were the closest he ever came to living on a relatively even keel but still, his moods could turn on a dime.

His military service was the thing my Dad was most proud of in his life, but he paid a high price for it. As did we who lived with him.

Seeing this painting of this young soldier...I can see the pain and confusion in his eyes...wondering why war continues...

It seems like war is a heavy burden to put on anyone's shoulders. It's like the philosophers once said, "war, huh, good god y'all, what is it good for? Absolutely nothing, say it again." If I was your dad, I'd still be pissed about "D-Day Dodger" as well.

War takes its toll on so many lives. Hoping that one day we find peace. Thanks for sharing this story of your dad. How he must have suffered!
Mary

we often forget about how the war still rages within the ones that fought in it long after it is over.

I think the soldiers carry it with them til death, its such a sad reward for such bravery of most, I hate war,

That must have been awful to deal with. It's such a shame that even today the amount of treatment for PTSD is limited.

My Dad had a friend who was also a "D-Day Dodger" It was always said in fun though from one who had been to a part of Hell to another who had been to a different part of Hell. Everyone knew - or we did, how bad it had been for him. But anyway thanks Debra I never considered my father's behaviour as being war related.

I am sorry your family had to live through such a terrible disease! Ptsd is horrible! Such a crippling disorder!

Wars do leave so many traumas on everyone, on people who live under it, on the soldiers, on the whole nations... I should know....

War does terrible things to good people. My dad was in the Pacific during WWII. He returned home a changed person according to my mom. I just remember the extreme - and often violent - mood swings. It's such a shame the way gov'ts. won't acknowledge the horrors done to soldiers.

My grandpa also had PTSD from storming the beaches at Normandy. He woke up on a Red Cross Carrier. He was never the same.
War is hell.

My grandfather brought his bride home from Holland, after serving there. He was also moody and quick to anger at times. I never considered it, but I suspect now that it was most likely symptoms of PTSD as well.

It's awful to go through war and it's atrocities. My dad was like that from the Korean War. Life with him was no cakewalk either.

So many lives affected by PTSD. My father was lucky to serve on this side, but my Great Aunt was a front lines nurse, who had brown hair when she left and white hair when she returned. She would never see a doctor after the war either... I'm sure she carried more than a little PTSD as well. I remember watching Band of Brothers with eldest a few years ago, and being unable to stop watching. I'm sorry your father was so haunted. Our cottage neighbour growing up got much worse as he aged, and when he was in his 70s had flashbacks. He ended up killing his son, in a rage, he had been transported back to WWII. Lois from Hamilton

Maybe that's what my mother had/has. She was a child in the war but evacuated to the country to live with someone I now believe may have harmed her in some way. Her brother died when he was 24, and she spent time locked underground in tube stations. I'm sure these things have shaped her. I try to remember that when she's abusing my Dad.

Have to wonder if the soldiers felt a bit self-conscious about being in Princess Patricia's Light Infantry. Doesn't sound very butch!

My grandfather was at Normandy. He never talked about it. He was a quiet, gentle shy man and I have no idea how he did it.

This is such a touching post, Debra. I can imagine the horrors your father saw and dealt with. How can any mind endure without damage? And your father was so young when he went to war as so many soldiers typically are. What a terrible thing.

something our soldiers deal with everyday when they come back home from war in the middle east. WWII was a true cause, today's soldiers fight in non-sense wars that are unwinnable like Vietnam

My Dad's oldest brother was in Patton's army and he really never recovered after World War II. He lived to be an old man, but my Dad said he was never the same person that he was before the war.

such a sad story and so many just like him..

I know of many people in Normandy who have been affected by the war. It is a good thing that you reminded us that the horror of war doesn't stop the day an armiciste is signed ! x

So many people ruined by war. I'm glad he found some small peace near the last years of his life.

I was looking at a photograph of my Grandfather in his WWl army uniform last week and remembering how my father told me what a very stern father he was, and in fact quite cruel at times to his children. My father on the other hand was his complete opposite, and I now believe that my Grandfather was most likely the way he was due to PTSD.
I came to your blog via "Silver Bunny" (that was).

i know first hand how you must feel. my brother who served in vietnam came back from that war addicted to heroin. he was never the same. his feet used to smell something horrible from having to keep his boots on in water for so long. the horrors of war really demean the human spirit. the really sad part is that not much help was offered to returning vets except the gi bill.

My grandfather is a WWII veteran, and also has PTSD. He still sleeps with the light on, and when my dad was a kid, he'd wake up hearing him scream during nightmares.

I can't imagine how we so failed our returning troops with resources in those days. Even moreso than today.

I am so sorry for your father and your family Debra! These posts are so moving!