People should be free to pee in whatever bathroom corresponds to their current gender expression. The profoundly ignorant idea that trans people pose a threat to women and children in bathrooms is vicious nonsense. Trying to force people to pee in a bathroom corresponding to their former, outdated gender identity is stupid and cruel. It only serves to set up trans people as visibly and conspicuously out of place and therefore vulnerable to verbal or physical battering at the hands of bigots and bullies. And that, I believe, is actually the true agenda of this ridiculous bathroom law movement -- to humiliate, punish and endanger the dreaded and feared trans "outsider." 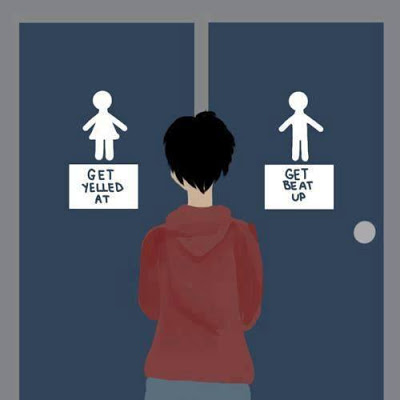 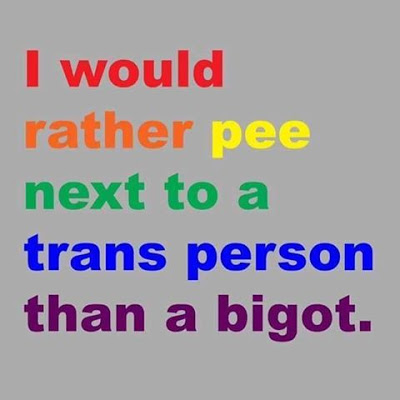 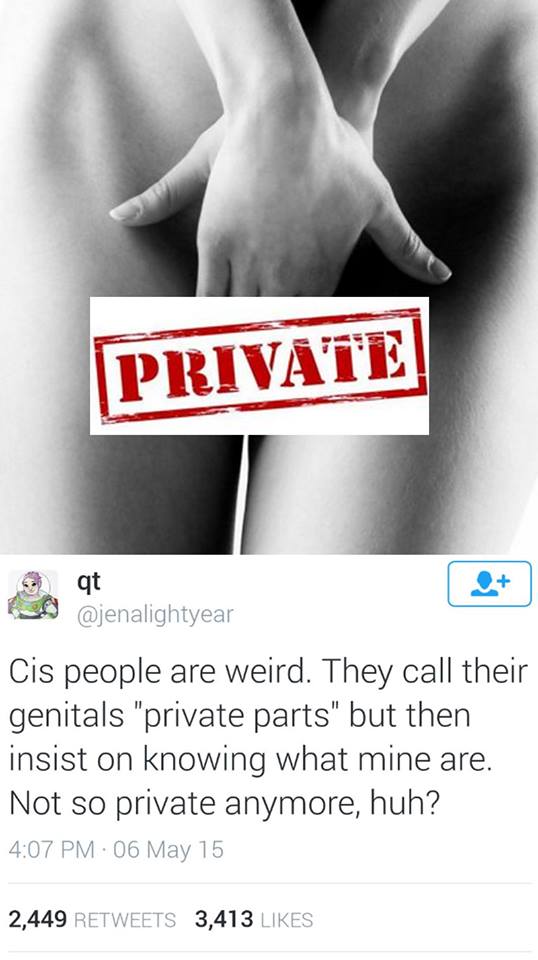 In Canada, this issue is alive and well too -- not so much concerning adult bathroom use, as in the USA, but concerning which bathrooms trans kids should use at school. It is even more reprehensible, in my opinion, to abuse trans kids in this manner. And such bigoted policies equally commit child abuse against cis kids too, simply by teaching them that their proper response to a trans classmate should match that of the school authorities. Adults need to smarten up. 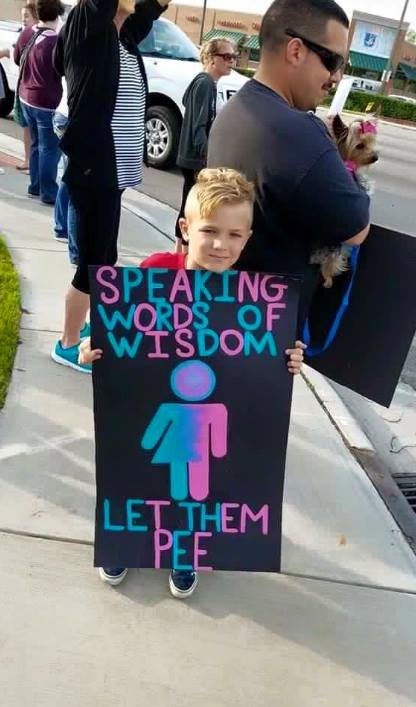 So before I start frothing at the mouth, let's just end this post with a little musical number, shall we?

ignorance knows no boundaries, eh? when I go pee, I just wanna pee; I don't give six shits who is in the next stall.

Hhm, yes, you're right, it's stupid and a problem for trans persons... I have a good friend who was a man before. Now she is a woman, but don't really look like that. That's ok, she feels good. But on public toilets she has problems with other women... And the other side: I went a few times to the men's room, because there were not so many people waiting and that was no problem for anyone... Confusing...

In Sweden we are not very rigid about bathrooms. Girls use the guys' when ours is full, young male friends and trans of every gender sometimes go in the girls' at clubs. The only men I have ever yelled at in women's bathrooms were the nasty cis guys who followed girls in to the women's when they thought everyone was too drunk to care.

I always wondered what is it to them and why should they care so much? Why is this even an issue? What are these jerks going to do? Peak under the stalls to make sure you have the correct bits? So sad indeed.

I wish my country (the US) was more as Misantropia described. Less rigid sounds nice. I really don't have a problem with "who" uses the bathroom that I occupy as long as they are respectful of my privacy and clean up after themselves. Honestly, if I thought the men's bathroom was tidier than some of the nasty women's restrooms that I have had the extreme displeasure of gagging while peeing in, I would always use the men's. I suspect, however, they might not be tidier.

It really is more about respecting each other than what gender we are.

Personally, no problem, just don't break in line. That is what I dislike the most. When I gotta go, I gotta go!

before all of this trans people have been peeing where they want since the beginning of time. who cares? people need to loosen the fuck up.

we're not anywhere even hear this discussion in my country... I don't think these regions will be ready for this any time soon (under soon I mean next few centuries)...

It seem the someone always seem to find something insignificant to spotlight and protest because someone wants to avoid real issues - like equal rights for ALL people. Making sure everyone has equal rights never takes rights away from anyone.

I don't think I've heard of any issues with transgender people using public toilets (I refuse to call them bathrooms since there is no baths in them). I did see a news story about a little boy whose parents let him live as a little girl because he felt more comfortable. There are bigots in this world but as time goes on they reduce in numbers. Acceptance will come but there may be a few more battles to win yet.

I couldn't agree more! Allowing people to pee as they identify opens up children to acceptance rather than all the ignorance we are experiencing (and teaching) as humankind.

I agree, the human race needs to loosen up. Let's just pee and carry on with our day eh? When ya gotta go, ya gotta go!

All so ridiculous! People can be so cruel.

some of the people in my country are just ignorant assholes.

I'm just too old to join this conversation...just wanted to say Hi, Debra. :)

Our school district just sent an e mail saying that students can use whatever gender specific bathroom they associate with. It shouldn't even need to be addressed but now it doesn't need to be discussed anymore.

It's all a crock of shit, Debra! Every time we try to evolve as human beings, this is what happens - ignorant resistance and cruel bigotry. It saddens me that people are suffering because of this nonsense. Why do these things that shouldn't even be issues always have to be so complicated?

I guess they've finally accepted that they lost on gay marriage, now they're on to the next phony outrage so they can find another group to treat as less than.

I love the song, but I hate public restrooms. I don't care who else is in there. It's that the stall doors provide no privacy. You can see under them and through the crack in the door. Is the idea so you can tell if someone is in there? A turn of a locked knob will tell one if the stall is occupied. I want doors! Real doors! Floor to ceiling. If we had real doors, the people who are crazy over bathroom use could get over it, and I would feel I have my privacy. Who is in the next little bathroom with a locked door? I don't care! After we all use our private stalls, then we can gather together to wash our hands.

Well, what I find ridiculous is, what do these people propose as a solution? Someone stands outside and checks genitals to make sure they match up to the sign? That sure seems a hell of a lot more invasive of privacy.

Yeah, and the trans people are the perverts.

I watched a quick video clip by Dolly Parton on CNN.
If she has to pee, she is going to pee she doesn't care where it's going to be.
https://youtu.be/hF7VGBg7Fc0

I shake my head at the whole controversy. In many parts of the world, the toilets are unisex so it isn't even an issue. In Korea, I noticed it is quite common for women to have to walk past the men's urinal to the stalls as they are all in the same room. However, I also recognise that some women and some cultures are uncomfortable for men and women to be peeing in the same room. So I think provision should also be made for them. As I said earlier, many unisex toilets cater for all needs without it becoming such a divisive issue.

As a transman who uses the Ladies loo, if unisex ones aren't available, I have more than once freaked a few ladies out. It's either that or possibly getting beaten up going into the mens.

Kinky Boots: loved it. In the US the Republicans and their fundamentalist Christian base are obsessed with women's reproductive and now urinary tracts. From requiring vaginal probes prior to seeking an abortion, closing women's family planning clinics, trying to outlaw contraceptives, to where, how and who women pee with. These people need to get a life and and quit looking for perversion they always seem to associate with women.

Good post today Debra have forwarded it on to my friends.

This happen to make me smile :)

And to think that way before, we just pee and just let it be that. No need to weigh political correctness and just let nature do its stuff.

I may ask my students opinion about this.

Every time I read about this, or hear someone speaking nonsense about it, I want to punch something really hard... preferably, the idiotic speaker. Seriously, there is so much to fear and be worried about in this world... where someone pees shouldn't be one of them. It's just hateful, dangerous, and mean.

I am so sad that stupidity has crept up into Canada as well. Of all the ridiculous things to get up in arms over - why should anybody cares who pees where?

I cannot click the video right now because the house is early and quiet but I saw the movie Kinky Boots awhile back and really enjoyed it and I own one pair of shoes. Anyway, this whole bathroom thing drives me batty. Aren't we past this yet? So stupid and more so hurtful.

I always learn something in your posts, Debra. I had to google "cis" because I had never heard the term, and I found out I am a cis! LOL I've just recently come from Italy where I came across lots of bathrooms that were used by ~ I don't even know what term to use! Used by ANYONE, whatever their sex, chosen or not. Each bathroom was a private one. That would be such a sensible solution; but, oh my, that would impose undue expenses on the bottom line for businesses and government! Give me a break! The same bathroom nonsense was used to sink the ERA Amendment back in the 70s ~ OMG, we were going to be forced to have unisex bathrooms! I'd rather have equal rights under the law as a woman than separate bathrooms for women. The whole transgender thing doesn't bother me. I would rather pee next to a trans person than a bigot or a bully. Can we please get to a point in our world where everyone is accepted and respected for who they are? Expand our minds and hearts a little!

It is scary how much stupidity is running around out there. There really isn't anything more dangerous!