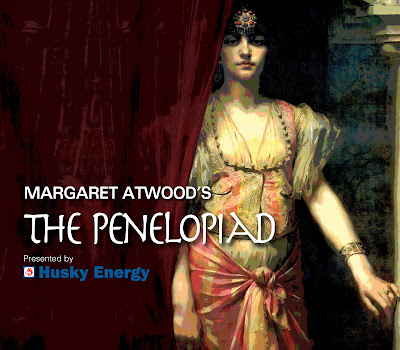 I seem to have developed a thing for Margaret Atwood's play The Penelopiad, based on her novella of the same name. The Penelopiad re-tells the ancient Greek myth of Odysseus from the point of view of Penelope -- faithful wife, abandoned spouse, single mother, a girl and woman surviving in a man's world. The original myth may have been written by the great poet Homer, but now Penelope has been given the benefit of Margaret Atwood's feminist wit and insight!

I read the book shortly after it was published and enjoyed it tremendously. In 2010, My Rare One and I went to Calgary with friends to see the play's first Alberta production. (I blogged about it here, if you're curious). And just this past weekend, we saw a new production staged here in Edmonton by the Citadel Theatre.

As always, the play featured an all-female cast portraying Penelope and her many maids, who also filled the male roles as needed (Odysseus, Telemachus, the suitors, etc.). Beth Graham (pictured below) was perfect as Penelope, bringing the necessary mix of vulnerability and strength to the role. 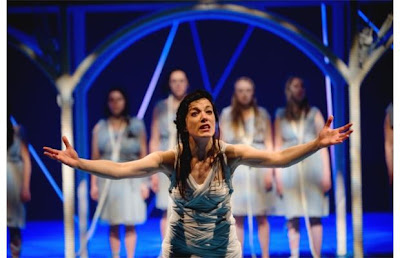 In many ways, the Edmonton production had a much lighter touch than the Calgary version and I think it worked better for that reason. The simple set gleamed white and blue, the colours of the Mediterranean Greek islands. Creative costume and prop use was made of rigging ropes, scarves and veils.

The cast, who were all students at this year's Citadel/Banff Centre Professional Theatre Program, brought youthful enthusiasm and talent to their roles. Lisa Norton (pictured below) did a great job of portraying the swagger, self-confidence and heroic mannerisms of Odysseus. 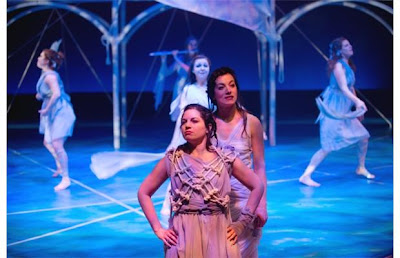 The Penelopiad is a wonderful play for and about women -- see it if you ever get the opportunity!

[Photo #1 from the Citadel Theatre website. Photos #2 and #3 by Epic Photography in the Edmonton Journal].

wonderful...i would love to see this!

sounds interesting and fun. My fave book on the subject is Glynn Illife's KING OF ITHACA which covers the early days of Odysseus and how he met Penelope in the first place.

Thank you for introducing this to me. I've never heard of The Penelopiad before today. I'm going to have to into now. =)

I'd love to see it. Will keep an eye out to see if it ever gets here.
Mary

Wow, sounds like a wonderful play. Wish I can go see it.

This looks like a play in which I would really enjoy watching!

Interesting. I have not heard of The Penelopiad. But it does sound good. :0)

I've never heard of this before, and it sounds great. I wonder if it'll play here (maybe it has?_; I'll have to check. There is always something going on around here. This city is small but the arts and music interest is huge!

Oh! I didn't know such a thing existed! I'm so glad I have you, you always find the most interesting things to introduce us to, thank you!

I would love to see this play. But *sigh* I live in Texas where they mostly either do Shakespeare or epic plays about the Alamo.
Oh so boring.

Hahaha...Love what Leeanna said! I live in Kansas...How many times can I see the Wizard of Oz??? I would really love to see this play. Will keep my eyes open for it..or maybe I can just click my ruby slippers and come see it in your neck of the woods.

I hadn't heard of it before, but it sounds interesting.

It looks like a wonderful play. Now I have to read the book too. The costumes in your pics look amazing.

so cool...sounds like a great experience. Being Canadian, you'd think I'd be a die-hard Atwood fan, and I am...sort of. Handmaids Tale, of course and Oryx and Crake - loved them....maybe I should take a look at this.
thanks for sharing - I could use a little culture these days.

(cannot comment here from my wp username?? I'll figure it out....)
peace

I am going to go get that book. I wish more historical events would be balanced with retellings like this one. Thanks!

I love her writing, so it would be lovely to see the play, too. I guess I need to read the book first, huh?

We have a great community theater so if they ever put this one I shall make it a point to attend.

sounds amazing I wonder if they will go on tour?

I will look for this play, if it comes my way! Thanks for sharing ;o)

Yes I'll watch for it too. Why am I always surprised at the cultural light that shines across the country rom Alberta? Too much rodeo publicity and not enough on your wonderful arts scene I guess.

I have never heard of this! I must explore....thanks for sharing!

certainly, I always compare myself with Penelope, whenever I'm waiting for my husband to come back home from office...women have this patience, you know.
thanks for introducing to a new (for me) play!

I love Margaret Atwood. She is a national treasure.

Given that the Iliad is a great Western epic poem classic written some 3000 years ago I do not know if we can honestly give it a modern twist. It was such a different foreign world to us then, how can we compare it to today. Women and Men had roles in society then which have no bearing on our world today.
What did it mean then a women's world or role or a man's world. Surely if Homer looked at us today he might think we were all aliens. I always think that when a modern twist is given to such ancient work it is to make a point. God knows we are good in Canada about making points for the sake of being right thinking, it is an arrogant curse in this country really.
If the Penelopiad is about and for women what is the point since it appears to exclude everyone else. Then what women are we talking about? White women in Canada or in Greece at the time of Homer. Different continents different women experiences, different values and points of views. Or is such a play simply there to reassure us of the right of our point of view?

Thanks for your thoughtful analysis, Laurent! I think that myths are truly alive only when we reinterpret them for our times and our lives. That's what makes the truth of the myth live on and be relevant to us. Otherwise they are just dead historical artifacts. All myths benefit from reinterpretation, including the Christian one. Sometimes we don't reinterpret enough, LOL!

I missed the production a few years ago at the NAC - I was living in Rome at the time but Megan Fellows did excerpts from it here as part of a chamber concert. A fascinating take on the myth and not just for women.

Very cool... we are seeing it at the Citadel next week!