The Battle of York

At daybreak on April 27, 1813, an American fleet of 14 ships arrived at York carrying 1800 soldiers under the command of Brigadier-General Zebulon Pike. He was the handsome and popular young explorer who had discovered Pike's Peak in Colorado. 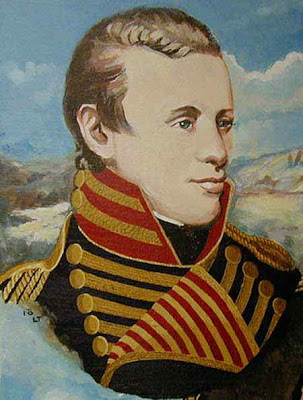 Major-General Sir Roger Hale Sheaffe immediately engaged the Americans in a land battle but the British forces were outnumbered four to one. The York Militia was not involved in the fight because it was busy evacuating the town. Sheaffe knew the battle was lost so he decided not to squander his remaining forces and to retreat to Kingston.

But before abandoning the York garrison, Sheaffe ordered that its Grand Magazine (the ammunition storehouse) be blown up so it would not fall into the approaching enemy's hands. The resulting mega-blast and shockwave killed 25 American soldiers and wounded 200 others, many of whom died later. One immediate fatality was Brigadier-General Pike. 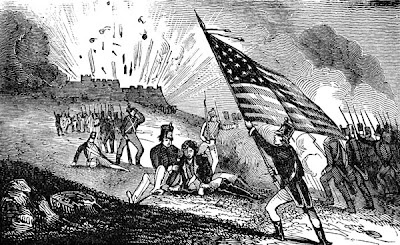 this part of history is unknown to me.

No hip pain here, but I still agree with Maglay. Supid wars! ...this has been so interesting. Thanks for sharing this info. I never knew this about Pike, in fact, all I knew about him was the peak.

So, we can say...this was the "peak" of his career? Nevermind.

AHAHAHAHAHAHAAA!!! That's a good one, jadedj.
Anywho, this is beginning to be one of my fav soaps. I love history.

And all this time, I never knew the story behind Brigadier-General Pike. I think I snoozed with my eyes open throughout my Canadian history classes in high school.

My gamers would love these posts. HRH will be in the post to you on Monday. I'm also including a special present for your Rare One. I'll be doing a post on Tuesday and you'll find out what the gift is then.

This is gonna be good! Love me some history - can't wait for tomorrow!

I do know the Indians were involved in all this fighting too. I don't know what tribes they are up there. It's all very interesting. 200 years ago today...wow.

Love me a good history lesson... looking forward to tomorrow!

Looks like Zeb spent a fair amount of time on his hair.

The death of the American soldiers from the shock wave always horrified me. One of the worst atrocities that has happened on Canadian soil. And it really pissed them off. Glad they aren't still mad at us.

Oh, how wonderful! However terrible, I guess it was a good idea to blow up the magazine storehouse.

Battle of York? More like the battle of DORK! Ha! Am I right?

I agree with the first comment! stupid wars!! And I don't have a hip pain, so I am not cranky, but does a tooth ache count?

Whoo! Canadian history! I don't remember this particular battle from history class though...

pike, the fish, is kinda tasty to eat, once you get rid of the 'floating' bones...

It's interesting how this particular part of history is unknown from mosst americans... if you look up into it more closely, you learn thhat the remaining American pillaged and ransacked the town and villagers left alone by the british.