Major-General Sir Roger Hale Sheaffe was a poor schmuck who couldn't catch a break. He had essentially saved Upper Canada by winning the Battle of Queenston Heights after Sir Isaac Brock was killed early in the battle, but did that make Sheaffe a hero? Noooooo. Everyone was too broken up about the loss of Brock to lionize Sheaffe. Brock got all the glory out of that victory, then and now.

Sheaffe succeeded to Brock's position as Lieutenant-Governor of Upper Canada and commander of British Forces in the Niagara region. This sounds pretty grand but remember that Upper Canada was small and rural. Its capital was a colonial backwater of 800 people on the north shore of Lake Ontario. Then known as "muddy York," today it is called Toronto. 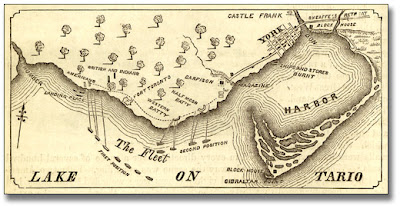 In April 1813, the Americans decided to try to invade Upper Canada again with a plan to sail across Lake Ontario and capture York. This time, would Sheaffe finally get his due as a hero by driving them off once more?

Tomorrow: The Battle of York

[Portrait of Roger Hale Sheaffe by Mather Brown, 1778; Map of York from the Ontario Archives]

Ooh ... an ode to unsung heroes!!! Can't wait till tomorrow to see if he thwarted those damnd Yankees?? I figure he must of or I'd be living there... will see???

the blog tech was born in muddy york!

Well that's typically Canadian. All of our heroes are the guys who "died trying". I don't know what it is about our culture that idealizes noble failure and ignores the guys who actually knuckle down and get the job done.

I love stories of unsung heroes....can't wait for the next installment.

I still find it shocking that we were once enemies with Canada.

I love history! Can't wait til tomorrow. It's like a soap opera. I love it!

Canadian history is so interesting!

Like Adam, I had no idea we kept invading your country. I'm both sorry and embarrassed.

Poor Sheaffe. I hope he at least had the love of a good (or any) woman once.

Very interesting history in Canada. I had heard of muddy York, but didn't know much about this story.

Well, between you and Francie, Canadian history has become very interesting!

I'm loving the history ~ and the beautiful old map!

Never heard of the guy, or anything named after him.

Well Brock's head was so big. What do people expect?? We like men with big heads in this part of Canada. Whatziz name never had a chance.

Debra, I love it when you 'read' us a history story. I wait to learn the results and find out if Sheaffe was 'crowned' or not. I know I ought to be ashamed of myself for not knowing this history of my country.

How exciting! Can't wait! I love your history lessons ;o)

ok fine... for back then

in recent history... what about north america's best aircraft, at the time, which beat the "murrikans' " all to hell - the avroe arrow - old dief the chief knuckled under, pulled support, cuz the "murrikans" told him to?!?

I would totally love to have had you as a history teacher! That first line had me hooked. :)

It's hard to believe its been 200 years already! Seems like only yesterday...

History was always my favorite subject. Battles always seemed silly to me. Why can't 2 leaders just get together and duke it out in a room? Whoever wins gets the land or whatever they are fighting for. Simple!

wow thats somthing the social textbook never told us at all