The American Occupation of York

After Sheaffe's retreat, the victorious American forces occupied York. The town immediately offered its surrender in return for protection of property but the Americans delayed signing the terms of capitulation. In the meantime, they spent April 28-30 looting and burning. 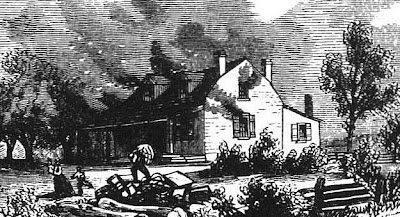 The Americans paid particular attention to destroying symbols of British authority. Government House, the official residence of the Lieutenant-Governor, was torched. So was the Legislative Assembly of Upper Canada (pictured below). Outraged American troops claimed they found a scalp hanging on a chair in the Legislative Assembly, but it is now believed to have simply been the parliamentary Speaker's wig. The printing presses at the Printing Office were also smashed and destroyed.

Among the items looted from the Legislative Assembly was this carved lion statue, now repatriated to Ontario and displayed along with an American uniform at the Canadian War Museum in Ottawa. 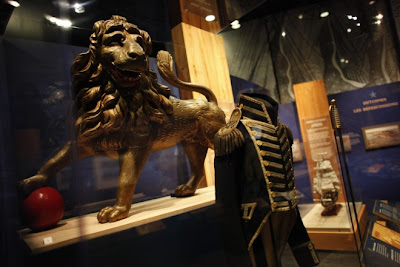 Tomorrow: Whatever became of Sheaffe?

This terrible habit men have of using false pretences in order to destroy, followed by retaliation from the other side is so depressing, especially since we know that it will always be happening somewhere in the world. I love your way of telling us this story !

OK seriously, I am very much enjoying a Canadian take on skewed American History and I look forward to the next installment. This one was particularly hair-raising.

I think that same scalp lives in the cabinet beneath my bathroom sink. OH WAIT! That's my wig!! And to think I almost shot the damn thing!

Oh boy, lots of scalp jokes. too funny! Those Yankee scoundrels, eh? But they should have been glad it wasn't Washington's wooden choppers hanging from the speaker's chair. ha ha. Anyway thanks for the info on what Google+ is up to, Debra. Infuriating!

I love that lion!

Imagine their horror when coming across said "scalp", only to find it a wig. I bet a bit of an adrenaline rush....

it is amazing and hair raising!

back then they used wigs as a false excuse for butchering, and now they use the false existance of nuclear weapons in oil rich countries..... nothing has changed....

Thanks for telling it like it was, Debra. I once again feel inclined to apologize on behalf of America. How embarrassing, especially to mistake a wig for a scalp. Unless it looked like Trump's hairpiece, there's really no excuse.

Those rotten scoundrels. At least we got our lion back, eh?

Great post! Isn't it terrible when people jump to conclusions without knowing all the facts? Doesn't seem like much has changed.

I'm glad you got the statue back. Looting and burning, lovely...we still do that from time to time. Although I have to say, some of us have evolved!

Thanks for the history. They never taught this to us in school, surprise, surprise.

These posts have been an interesting read. It never ceases to amaze me at the brutalities of war.
{{thanx for the mention of Pikes Peak! It is quite an impressive mountain peak if one approaches it from the prairies to the east.}}

Those were Crimes against Humanity and War Crimes we should demand major reparation + interest. Maybe we can give them Harper as a Peace Offering. I know the GOP will take him.

Sorry I've been such a slacker, but I've had a lot of things going on at home (possitive things).

Like many others, the novelty of my blog wore off for a while. You, however are my inspiration.

I culled out approxiately 85% of the blogs I followed, and the list is down to around 8. You are still #1.

After a 2 monthe absense, I posted again tonight. I gave you a shout out...

Rock on my girl.

ooh look at that lion!!

How could they mistake a wig for a scalp? Someone clearly is trying to push the bounds of reality here.

So it wasn't always the 'bad guys' looting and pillaging!

stay alert, our governments are talking, behind closed doors, of creating the united states of canada, or some such... to include mexico has been brushed aside, perhaps permanently....

what can I say? we didn't like the British back then.

If there's one thing history shows... it's no one's got a clean slate. Unfortunately.