Remember Larry, Chief Mouser to the Cabinet Office, who resides in the British Prime Minister's official residence at 10 Downing Street, London? Larry's job is to keep down the mice at that famous address. I did a post on him about a year ago -- click here if you'd like to read it. 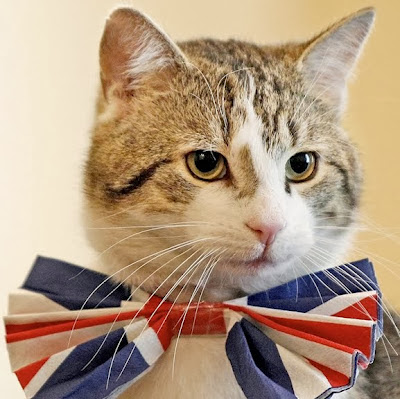 Alas, it now seems that poor Larry is not such a fierce mouser after all. His stats suck big time. He's only caught a single mouse on the job. Worst of all, the Prime Minister caught Larry napping in a chair while a mouse ran right in front of him! The PM woke Larry so he could do his duty for England, but Larry only briefly opened one eye and then promptly went back to sleep.

So now there is a new cat at 10 Downing Street named Freya. She is a street-hardened veteran of the mouser brigade. Appropriately enough, she is named for the Norse Goddess who commands the warlike Valkyries of battlefield fame. 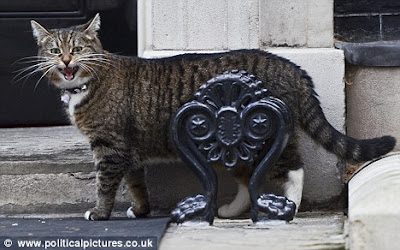 To spare Larry's fragile male ego, Freya is simply said to be "job-sharing" the Chief Mouser position with him. But Larry knows the ugly truth and he doesn't like it one little bit. In fact, Larry got into a terrible cat fight with Freya right on the doorstep of No. 10 in full view of the press and paparazzi! 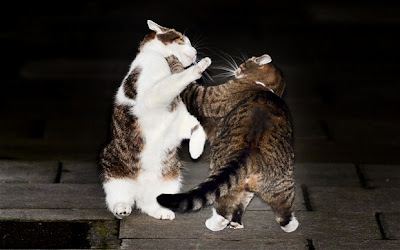 Freya made short work of him, of course, and now poor Larry is more disgraced than ever. I think if he's wise, Larry will take an early retirement package from the civil service and go live quietly with a nice old lady somewhere in rural England.

[Photos from the British press online]

Oh my! I really should keep up on international happenings. Thank heavens you are here, Debra! Anyway you didn't mention how HRH feels about this. Will she be heading off to stand by her man or will she stand in female solidarity with Freya?

hmmm...it happens to all us poor Larrys!

I almost feel sorry for the mice with Freya on their tail(s).

Hi Francie -- HRH is making like a Swiss kitty and staying judiciously neutral in this dispute.

she stole his mojo!

So, I gather these cats are licensed to kill by MI6?

Scuffling like Commoners! Oh the shame! The horror! Larry needs to quietly leave the limelight.

I think the rural English cottage sounds like a better deal.

Another deliciously funny post, Debra! I think Larry needs to man up!

Well as always you have tickled my fanny as GK says. Poor lazy Larry, just desserts if you ask me. Being replaced is a disgrace of course but one must carry on. Oma Linda

I feel bad for Larry. His poor little cat manhood is being challenged. I am sure he thought being a government employee allowed a certain degree of non-performance.

or with the retirement packages from the government positions ,,, buy a small island in the Caribbean!Poor Larry,

Well now, has M at Mi6 put Freya on the payroll of HMSS?
What of Larry?
Will M have Larry "retired" so to speak?
Will you keep us informed?
Will it be cold tomorrow?
Is it spring yet?
will we .....

This all sounds a little familiar!! Boy/girl, cats sure learn quickly and pick up the worst human habits!

My pesky Kamir can probably out-mouse them both, for he is a true country mouser!
(Seriously, the bodies this guy leaves all over, it's sad.)

We had a mice problem a few years back, maybe we should see if we can steal Larry.

PS... I want desperately to reply to some of your wonderful comments at my blog BUT you're set up as a no-reply commenter... did you know that?

This is wonderfully hilarious! Wouldn't it be great if this would be the worst of problems around the world?

Looks like Larry got a little too comfortable on the job. Or maybe he has some deal going with the mice...

I blogged about Larry before:

Poor, downtrodden Larry! That last picture looks like any given day in our house! :)

OMG, THIS IS TOO FUNNY! Im suprised HRH didn't put in for it? Meanwhile my dearly departed Starrbooty never caugh mice either. Upon seeing one once, I told her to get it. She looked at me whilst laying on her side, eyes half closed and had a look of " Bitch please, I don't do mice"

That lazy Larry is getting exactly what he deserves. If your not going to do you job, step aside for a girl. Don't step gracefully, and risk humiliation.

I feel sorry for Larry! He can come live with me ;o)

The new cat is a mean mother-fucker. Just look at that evil face!

Poor Ole Larry! I hope he outdoes Freya in his job

The new cat sure looks like it's a mean one, hopefully does a great job as a mouser.
this was too funny.

And I bet Larry only caught a gummy mouse! Cheers, Freya!

Haha! What a great story! Go Freya! Larry made his own bed with his laziness.

don't mess with a cat named after a Goddess...and my personal Goddess at that.

LOL Love it! Poor Larry. We have a Freya living here.

Hi.. my name is Chris Montgomery and I am the photographer that owns full copyright of this photo of Larry the Cat that I took inside Downing Street on the Cabinet table. I request that you kindly remove my photo from your website as you do not have permission to use it.

It was part of this series that I shot as official photographer for Downing Street the day Larry moved in.

Here is part of the series on my website:

The image use is managed on license by image agency ‘Rex Features’ who I am represented by.