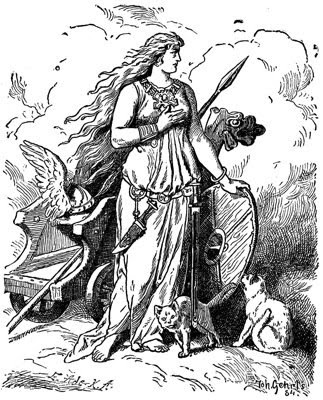 Friday is the special day of the week which honours the Goddess because it is named for Freya, the Norse Goddess of Love. In ancient times, Viking weddings were traditionally held on "Freya's Day" to ensure the blessing of the Goddess on the marriage. But the most blessed of all Fridays were those that fell on the 13th day of a month. Thirteen is the number that is most sacred to the Goddess because there are 13 moon cycles in a lunar year. So Friday the 13th was doubly sacred to the Goddess and to those who honoured the Divine Feminine.

When Europe was Christianized, one of the ways that the Church suppressed the Divine Feminine was by demonizing Friday the 13th. People were taught to fear this date and to fear the number 13 generally. Friday the 13th became synonymous with bad luck and misfortune, the very opposite of the meaning it had enjoyed in pagan times.

So now let us reclaim Friday the 13th! Let's restore its rightful meaning as a day that is doubly sacred to the Goddess, a day of good luck and special blessings. May you have an absolutely wonderful Friday the 13th!

Amen to that! Funny, Friday the 13th always tends to be a lucky day for me. I swear, I was a pagan goddess in a past life (well, I just like to think that!). Have a very blessed and lucky day today!

Wonderful information. I've never been fearful of this date.

A Touch of Heart said...

Wonderful information, thank you. I've never been fearful of this date. 8-13-21