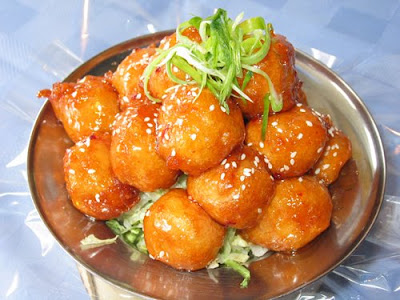 My favourite place for Chinese food in Winnipeg was the Northern Pearl. Their chicken balls had a delicious hoisin-based sauce that I have never encountered at any other restaurant before or since. They had a wee bit of a cockroach problem at their original location, but the food was so good we ignored it. Also, there was a whorehouse upstairs but we ignored that too. (Apart from sharing the same building, it was unrelated to the Northern Pearl, of course).
The Northern Pearl was forced to move to another spot when their original location burned down or was expropriated (I can't remember which, now). However, their magnificent chicken balls continued in all their glory at the new restaurant. The Northern Pearl was always busy but it inexplicably went out of business over a decade ago, which was a great loss as far as I'm concerned.