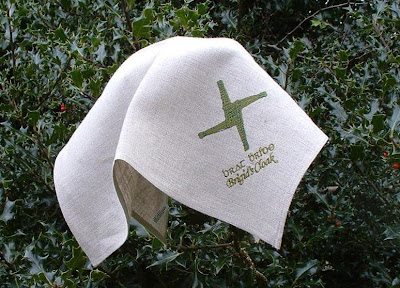 Imbolc is sacred to the Celtic Goddess Brigid (who does undercover work these days as the Irish Catholic Saint Brigid). She is the Goddess of many things, including healing. There is a charming ritual associated with Brigid and the Eve of Imbolc (which is today, February 1st). As recounted by Sara Jane Kingston on her website:

Traditionally, the brat bhride, or Brigid's Cloak, was laid outside before sunset on the eve of Brigid's Feastday, 1st February, and brought back in before sunrise. Blessed by Brigid, ancient Spring goddess and saint, the dew which fell that night imbued the cloth with powers of healing and protection which lasted throughout the year.

It would then be kept in a special place in the house and brought out as needed when illness occurred. It could be wrapped around the head to cure a headache; it was widely used by midwives to help women in childbirth, for Brigid was especially known as being the patron of healers and midwives. It was used on sick animals also, especially cows and sheep for which Brigid had a special affinity.

This is why Imbolc is difficult in Canada. There is not a single drop of dew to be had anywhere in this country at this particular time of year. If we put out a Brigid's Cloak on Imbolc Eve, the next morning it will be frozen stiff under a few inches of snow, assuming that it has not blown away in the wazoo-seeking Arctic breeze referred to yesterday.

This concludes my bitching about Imbolc. Tomorrow I will blog about our home-grown substitute Imbolc ritual.
Posted by Debra She Who Seeks at 07:15