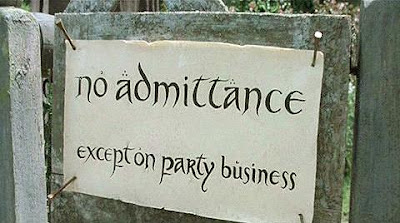 Do you know what today is? Yes, you're right! September 22 is the shared birthday of Bilbo and Frodo Baggins, everyone's favourite hobbits from The Shire! Let the partying and fireworks begin! 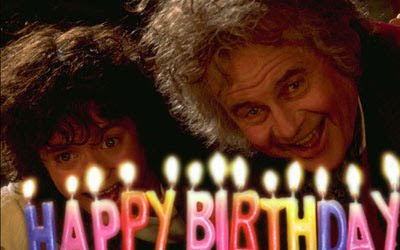 And it's also now Hobbit Day! Every September 22 since 1978 has officially been declared Hobbit Day by the American Tolkien Society. In fact, this whole week is declared Tolkien Week in honour of the man who wrote The Lord of the Rings saga. 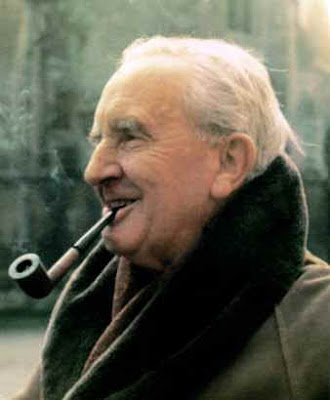 I love The Lord of the Rings, both the books and the movies. I first read the books 35 years ago when I was a young university student. I was so engrossed and thrilled by the story that when I was finished, I turned right around and read them all again a second time. Then about 10 years later, I read them for a third time. Someday, a fourth reading will be in order, I know. But now we also have Peter Jackson's magnificent movies to watch. Plus next year, we'll be able to see his film version of The Hobbit -- very exciting!

we share this love,, I'm right there with you!!

I'll bring my Elven people to the Hobbit birthday party, but only if you promise that those naughty Dwarves will behave this time and won't drink too much of honey wine!

Happy Hobbit Day!! Sounds like a Lord of the Rings Movie Marathon is in order. :0)

The first time I read the Hobbit I told myself that I wasn't insane, other people dreamed amazing worlds too ;-)

I loved these stories, even if the movie made Sam and Frodo look a little too 'friendly' together for my comfort...

Happy Hobbit Day indeed. How absolutely wonderful to have arrived here just in time. I adore The Hobbitt. First time I read it I had to make myself go slowly because I wanted not to miss a thing. I too, within months, reread the book and have "enjoyed" the movies but can hardly wait to share my books with my grands. Lots of great discussions await.
Oma Linda

I have never read the 'Rings' books...I've heard about them and their characters...perhaps I should be put them in my reader and start...

Happy Hobbit Day to you too Debra! Now I wish I had made a mushroom canape to celebrate, darn it. I will make sure to create something mushroomy today for sure.

Took me a while to warm up to the LotR books but not The Hobbit. I ate that up quite quickly and then I was ready to tackle the literary fantastic odyssey of Frodo. My husband kind of insisted I read these books before we got married, they were that important to him, LOL.

today is my son's birthday as well...(and my father in law's...what a great daughter in law i am!)...my son tells everybody that he has the same birthday as the hobbits....as he gets older...it is even more impressive....

Happy Hobbit Day, Debra. I've never read any of the "Rings" books either, but I know all about them.
Mary

A very Happy Hobbit day to you and a wonderful Autumn Equinox as well!

I stopped counting how many times I've read LOTR after 35. I'm a huge fan of both the books and the movies. But it doesn't hurt that I share a birthday with Bilbo and Frodo. :)

I look forward to the Hobbit as it was my very favorite. Didn't know they have a special day to honor Bilbo and Frodo...thanks.
Also...after being hacked twice now...I decided to make my blog private...but would love to continue to have the pleasure of your blogger friendship...my email address is earthy104@yahoo.com if you would like an invite please email me. I'm not thrilled about the invite only thing...but after having posts removed and someone elses words printed on my page...well it was a might scary....hope you understand.
Happy Hobbit Day!

I didn't know it was Hobbit Day, and I'm a Took! Oh the shame!

What you didn't seriously think I'm *not* a rabid Tolkien fan, did you? :)

Happy Birthday to all the Honorary Hobbits who share Bilbo's and Frodo's birthday today! You share in the magic!

'the hobbit' will be TWO separate films, btw

I don't know Ill be partying. Hobbits scare the hell out of me!

Yay for hobbits! Looking forward to the film version of The Hobbit...its my favorite book by Tolkein.

You ever hear the awful Bilbo Baggins song by Leonard Nimoy...your post reminded me of it and now I cant get it out of my head!

maybe this explains my Frodo Foot.

I'm one of those heathens who couldn't get into the books at all. So I reluctantly sat to watch the first film, and was completely hooked - all the films are quite specatular. Happy birthday guys!

Tolkien is my favorite! I think it's time for a re-reading of The Hobbit!