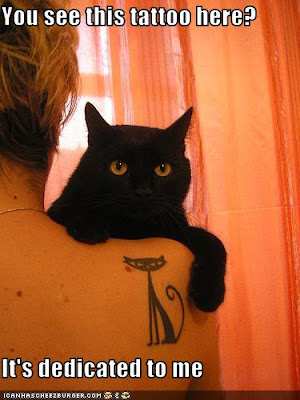 I never saw a woman with a tattoo until I started hanging out in Winnipeg's gay bars in the mid-1980s. Occasionally, old-school 1950s butches would show up with tattooed forearms like the men of their generation had. Younger dykes would have feminist tats on their biceps or shoulders -- woman power symbols (with or without fists), Amazon labryses (double-headed axes), stuff like that. 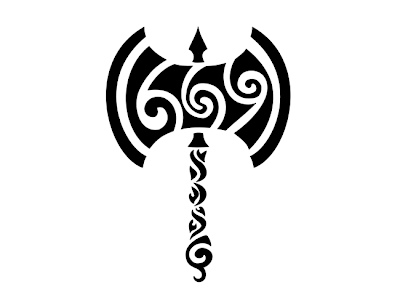 Lesbians led the way in popularizing tattoos for women. Long before it became a mainstream fashion, lesbians loved tats for their edgy, defiant, gender-bending vibe. When I first came out, getting a matching tattoo with your lover was a popular way to demonstrate "family ties" before our relationships had any legal status. Barbed wire and Celtic knotwork armbands circling a bicep were favourite lesbian choices at that time too. Eventually tribal tattoos were all the rage. And so on and so on.
[Tomorrow's post: will our heroine get a tattoo?]
Posted by Debra She Who Seeks at 05:30

Learn something new every day.

I guess I should pay a bit more attention to tattoos.

Would that be a cattoo?

I think the barb wire tattoo is reaaly attractive,,thanks for sharing this today,,

I've always thought the wing tattoos some women get on their shoulder blades are really pretty...

Lesbians are awesome with this tattoo thing! Here I was thinking I blazed the trail in 1991 by getting my first.

I have no tattoos but then again I'm,nor a lesbian either. I've said ill get one the first time one of my books fits NYT best seller list.

Can't say that I know much about being a lesbian, but I'm definitely long overdue for a new tattoo.

I love Celtic knotwork. If I were to have a tatoo it would be of some beautiful Celtic pattern.
Mary

I have lots of ideas for a new tat..but the cost keeps me from getting it..wanted the Goddess put on my shoulder and would cost $300...eek..
years ago I had a 8-ball tat on my left boob..after 30 years it was starting to resemble a pool stick and not a 8-ball...so I replaced it with a Dallas Cowboys helmet with #40 on it for Bill Bates, my favorite cowboy.

Personally I thought the mayans led the way, but I could be mistaken.

That ax is fantastic. WILL you get a tattoo? They are not as 'permanent' a decision these days, although it is $$ to get them removed.

hmmm....maybe i am a lesbian. i got my tats when there was only one parlor in this city. now there is one on every block. i got my first tat in the late 80's.

Don't get a tattoo Debra. This is my opinion only, but I think tattoos on pretty women make them look sleazy and tattoos on not so pretty women only emphasize their lack of external beauty. Just saying. Apologies if this upsets anyone, as I said, it's just my opinion and who am I!!!

You you you...you're doing a cliffhanger!!?!

So did you get a tat or what?

By the way, how did you get the heart in the title for this post?

Yup, I have two. Little tiny ones that desperately need to be redone or made into something else. (They're from 1977.) Back then I put them where you could see them in a bathing suit, but not a suit. ;)

No tattoos for me! I'm just one big chicken when it comes to pain.

beatles reworked to: i am the axe man? ;) lol

I love that cat tattoo! :0) That's the first image I've seen that I actually like as a tattoo.

My great-grandmother got her first tatoo on the inside of her forearm (wrist to elbow) of Our Lady of Guadalupe around 1900. She was 4'11, carried a pistol in her garter belt on formal occasions or just in a secret pocket built into her bloomers for casual wear. She built her own sod house and raised 6 children in it. She was also a bootlegger, though it helped that she was married to the sheriff's brother and she was the best damn poker player I ever met.

In her 90's she wore high top sneakers and jumped in the surf with us kids from rock to rock. I loved her tatoo, her spunk and that fact that there wasn't a box big enough to stuff her big personality into.

Maybe she inspired the lesbians in the 50's to get their tats while teaching them how to drink shots of whiskey and play 5-hand draw, jacks or better to open.