What the Tats Said 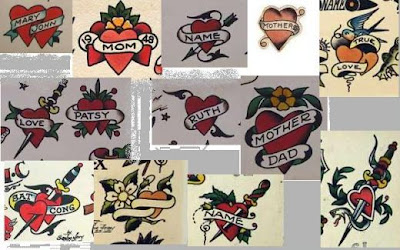 My father chose very sweet and wholesome tattoos, as befitted a prairie boy straight off the farm. No naked women for him!

One tattoo said "Mother." On his other forearm, a second tat memorialized a sister who had died young of tuberculosis. Hearts and flowers surrounded each name.

A third tattoo said "Good Luck" in the midst of four-leaf clovers and a horseshoe. Not too hard to figure out why he got that one.

His fourth tattoo was somewhat patriotic in nature -- "Death Before Dishonour." I can see how that noble sentiment would have appealed to his teenage idealism.

When I was a little girl, I used to sit in his lap and trace his tattoos. He would tell me how they had originally been solidly multicoloured -- red, yellow, green. But with the inferior dyes of that era, the colours soon faded out, leaving only the dark blue outlines.

my grandpa had army tattoos ... but unlike your dad, he really had some naked ladies on his arm, and to add to that, some badly tattooed naked ladies :) But grandpa was a blacksmith after all :)

such a sweet story,, lovely tattoos.I love the way you write, it paints pictures in my mind.

Very off topic.....I have to get some of those gloves! I just love them!

It's funny, neither of my parents/grandparents or anyone in my family had tattoos. And yet me and my brothers and sister all have at least one. One of my brothers is so covered in them he's starting to look like Eminem.

I may not comment everyday, but I am enjoying this series on your Father's tattoos. Some lovely memories here for you. Lots of smiles!

Tatoos with deep meaning are so very different than some of the tatoos you see here in the city. Although personally I would never have one, I do admire them, but some go too far. There's a young woman I see on the train who is covered in tatoos. There is not an inch of bare skin to be seen on either arm or leg. She even has one on each cheek. That, to me, is going too far and I often think of when one gets older will they still think it looks so cute?
Mary

Now those are some real tattoos. Not the cliched tribal tattoo a white guy gets around his arm, or the tramp stamp a girl gets on her back. Much respect for your father.

I do love visiting here with my cup of tea and hear a great story. Thanks for sharing.

I love tattoos :) i have a cheeky one on my bum. I do think about ehrn i get older maybe in a home what the nursing staff may think!! thanks for sharing x x x

I'm loving your stories of your Dad and his tattoos! Thanks for sharing such special memories

Crystalrainbow: The nursing staff will think you're very old school. (Because your children and grandchildren won't have any interest in getting tattoos, soooo old school. ;)

my tats have no color left in them at all!

Lovely! I guess your Dad was a ploughboy if he was from Western Canada. Dad always refered (affectionately) to Ploughboys and Herring Chokers. The boys from this part of Ontario were the Cherry Pickers.

re your comment on DEZMOND's blog: well-played. did you call me kinky though?

you obvioulsy have a beautiful relationship with your
father..

So no naked women, but they still ended up being off-color.

My Dad's is a Mom one, too. His love for his mother is so beautiful and deep. He had a highly abusive father who nearly killed Dad's mom. Dad was always very protective of her.

I asked my dad once why he didn't get any tattoos while he was in the service..he said 'my mama would have kicked my ass.'

You paint pictures with your words dear one. Great stories about your Dad and the memories inspired.

Wonderful that you and he could enjoy his tats together...