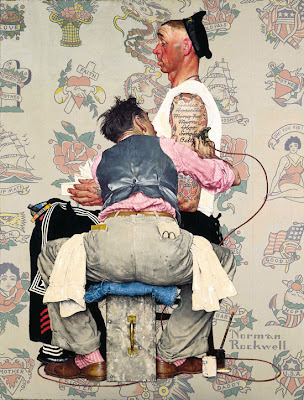 Unlike many people I've met over the years, I did not grow up with a negative view of tattoos as weird or ugly. That's because my father had tattoos and I grew up seeing inked skin as normal and commonplace.

Dad served with the Canadian Army during World War II. That's why he had tattoos -- many servicemen from that war did. He volunteered for the armed forces in 1942 when he was 18 years old. He got his tattoos not too long after that. I suspect getting tattooed was a way for many young men to demonstrate bravado and machismo during a very scary time when their survival was not guaranteed.

I got mine for that very same reason. Survival in the 60's :)

I was just wondering if its not too forward to ask, what did he have for tattoos?

My daughters both have tattoos. Things that are meaningful to them.

yep, tattoos are a trend in the army!

Hi Laurie -- My Thursday post will describe what each tattoo said. Yes, I'm drawing this out and milking it for as many posts as I can, LOL!

My father was in the US Navy during WWI, and he got two tattoos then; an anchor and a rope. SO I grew up with tattoos too. My husband was in the Navy as well, and when I met him he too had a tattoo of an anchor.

i think the camaraderie of those days was worth commemorating....i am sure he was very brave....those were scary times....

My tattoo is looking REALLY ridiculous these days thanks to the belly. It looks like my ladybug has elephantiasis.

My daughter has a tattoo of a heart on her inner forearm. She got it when she was 20. None of the boys have been brave enough yet, although I hear a lot of talk...

Thankfully machismo in my era was ruling atari!

We're looking forward to hearing about your dad's tattoos. The only time I think badly of them is when they cover a person's face. That just seems like a bad life decision.

I believe it was a tradition back then, amongst servicemen, to visit an establishment for a first-time encounter of the conjugal kind, then get a tattoo to mark the occassion.

Bravado of a different kind...

Growing up, my uncle had tattoos and I had a very positive view of them always, too. My tattoo is a rose with a dagger through it on the inside of my ankle. I got it when I was 19 and I still love it. I LOVE tattoos!!!

I'm curious too as to what your fathers tattoos were. Both my parents were in the Navy but neither one of them had tattoos and I always wondered why my dad didn't. My grandpa was a Naval officer and he had several...I remember an anchor on his arm when I was a little girl.

I find other people's tattoos fascinating--they really are such a personal thing. My husband has 5 and they're all meaningful to him. Most people I know are surprised to discover that I have 2 myself--very girly ones that no one can see unless I'm wearing a bathing suit, but I know they're there and I love them! Can't wait to hear more about your dad's!

Growing up, the only people in my small town who had tattoos were servicemen or hoodlums. My Dad never did get a tattoo even though he served in the Navy during WWII.

Hmm. That's an interesting rationale for getting tatoos, and I'll definitely buy it. Tatoos do, for sure, take a certain amount of bravado to acquire. Personally, I think getting up every morning and surviving each day with a smile on one's face takes a similar amount of machismo. So personally, I'll pass on any other self-inflicted pain. Life itself hurts a bit too much without that added. But I respect the tatooed members of the world!

I think that you are right in the motivation for young guys getting tattoos prior and during WWII. .it make them feel like men, going off to do a very serious, very dangerous job.

And it also identified them when they were in their civvies, separating them from the rest of the general population.

My Dad started out in China, as a member of the Flying Tigers, eventually going to India, and the deserts of Egypt. (bringing back tons of gorgeous photos) It was there where he got his tattoos. He said that there was little to do in the form of recreation, and he did it out of boredom.

Many servicemen got tattoos...my father and my son in the US Navy...of course the style of tattoo has changed over the years...

My dad got a tattoo while serving in the Navy. It's always been part of him in my experience and I love it because it's part of my Dad.