It's Hockey Night in Winnipeg! 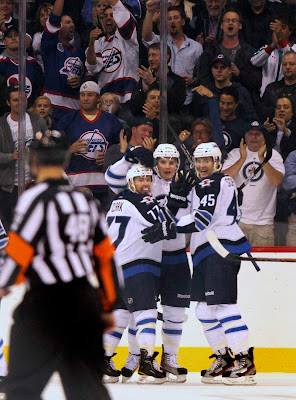 Earlier this week, the resurrected Winnipeg Jets played their first home game in 15 years at the new MTS Centre in downtown Winnipeg. The Jets triumphed in the preseason exhibition game against the Columbus Blue Jackets. Ecstatic Winnipeg fans were in a frenzy. Here's the scene as described by sports writer Roy MacGregor of The Globe and Mail:
"In 2011," the MTS Centre scoreboard read, "The NHL Returned to the Greatest Fans in the World."
And it certainly seemed so. They screamed throughout the warm-up and sang O Canada as if the players on the ice had just won Olympic gold.
And then they got really loud. A mere 37 seconds into . . . [the] game, Byfuglian levelled Columbus's Cody Bass with a single punch -- Bass likely unaware of Byfuglian's mood, given that the big Winnipeg defenceman had been formally charged only hours earlier by Minnesota police for allegedly being under the influence of drugs and/or alcohol while operating his boat in late August.
Once the fighting penalties had been served, it was Byfuglian setting up Paul Postma for a point shot that became the reborn Jets first goal . . . of the new era.
*sigh* Oh yeah, baby, now that's sweet hockey. Very sweet indeed.
Welcome home, boys! All is right with the world again.
[Photo by Phil Hossack of the Winnipeg Free Press]
Posted by Debra She Who Seeks at 05:30

I have been listening to people's enthusiasm about the return of the team on CBC and I am happy that the game is back. I don't understand the violent culture of it though and personally can't support it as a result. I did hope that after what happened with Sydney Crosby that things would change but... apparently not. Oh well.

you made me smile this morning,,

hope you didn't have any falling satellites in Winnipeg last night!

I would have given anything to see that game!
WELCOME HOME JETS!!!!
And yes, I think the new sweater is pretty nice.
(plus the fight sounds terrific....I do indeed watch hockey for good, clean, tough-guy fights)
The Universe is slightly more in balance now! (if only we could get the team out of Phoenix....and get rid of Betman too....)

i am very happy to see more hockey back in canada! i mean, we have hockey here but hockey in the south is just not right!!!

From an American hockey fan, a well deserved return home by the Jets!

How happy the fans are and hooo-ray for them all! Hooooo-ray for hockey season about to begin! I am wearing my Buffalo Sabres Crocs already!

Every once in a while, wrongs get righted.

Freaking thugs. I love it.

do they have a 'benny' on the team or staff?
if not, they need to get one:
http://www.youtube.com/watch?v=8vLlpJc9mW0

You know, I always say I hate sports but you reminded me how much I loved going to the hockey games. Great photo...can see the passion!

Only a bit of a fan, but am thrilled the Jets are home!!
Enjoy!

How exciting for you! Being from the Boston area I am a Bruins fan, but I have to tell you, I've always enjoyed listening to "O Canada" it's one of my favorite anthems!

Also, thank you for your kind words about my mom, she will be forever missed and in our hearts.

hey...that glass of wine is sitting here on the drainboard with your name on it !!!!!

did you know l'il teddy is named after joyce's teddy of octoberfarm...she saved me when Buddy died...so i named my new baby..... Teddy !!!!

Big new for the Peg!

While not a real hockey fan, I do love what the team's return has done for the city!

now i believe that you're canadian!

When I lived in Winnipeg I rarely missed a game. Glad they are back.