In October 2009, priestesses gathered on the slopes of Mount Olympus, home of all the Greek Gods and Goddesses. A sacred fire was kindled directly from the rays of the sun, a ritual which has been done since time immemorial. But Hestia's sacred flame was not destined for use in an ancient temple or ritual . . . 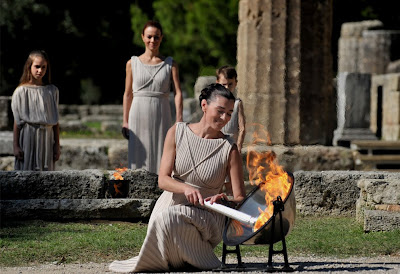 . . . this time it was destined for a modern, secular purpose. The priestess transferred the sacred fire to a Torchbearer of the upcoming 2010 Winter Olympics in Vancouver, British Columbia . . . . Canadian, eh? How can you tell? Bet that toque and those mitts were pretty hot under the Grecian sun. 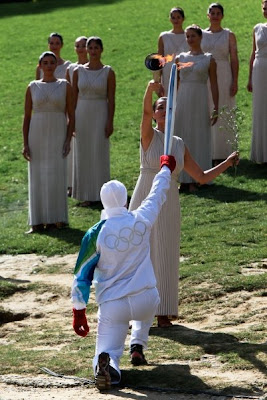 The sacred flame was then brought to Canada in a miner's lamp. The mayor of Vancouver carried it off the plane. 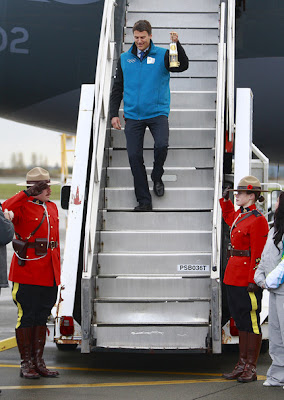 So is the Olympic Flame tucked away in a safe spot until the opening of the Olympic Games in February, 2010? Oh no -- it's being used instead to light an endless series of Olympic torches that thousands of Canadians are carrying in a huge cross-country relay run. The miner's lamp rides along in a camper van accompanying them. 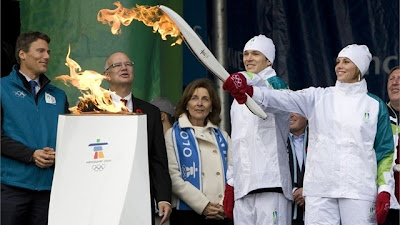 Torchbearers started running in the Maritimes on the East Coast and are making their way westward through every province and territory. The Olympic Flame is being carried through large cities, small cities and innumerable towns . . . 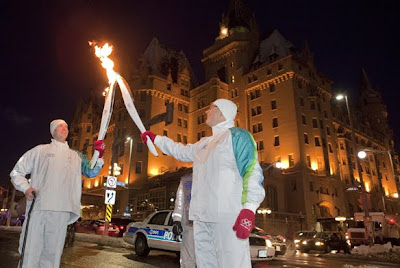 . . . and through more remote areas of Canada as well. 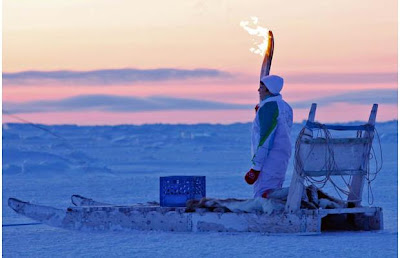 It even showed up in the federal House of Commons in Ottawa, carried by Barbara Ann Scott. She won figure skating gold in the 1948 Olympics and, at 81, is still a national icon in Canada. 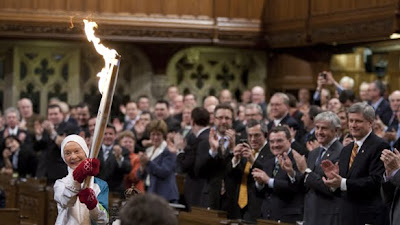 All along the route, Canadians have been enthusiastic, no matter what the weather conditions . . . 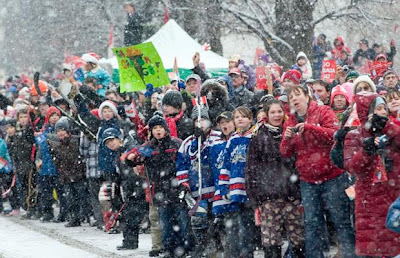 . . . and today the Olympic Flame arrives in Edmonton! After work, my Rare One and I are going to watch the Torchrunners go past the University of Alberta. After all, how often do you get to behold Hestia's sacred fire? It's a once in a lifetime opportunity! 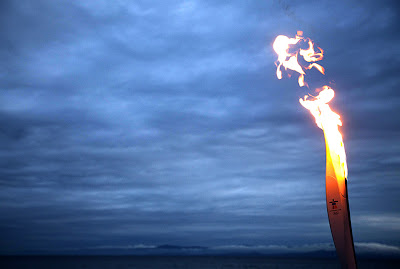 I especially love that an 81 year old woman participated!

~breathtaking...thank you so for sharing...may you savor those moments you are about to see...to embracing life and exquisite moments...brightest blessings~

I got chills reading this...

It is truly a wonderful ritual isn't it.

The Games start on my b-day this year.

Thank you for sharing this. Amazing!!! What a sight you are about to see. Please let us know all about it.
Mary

It is very exciting to behold that flame!!! next Tuesday, my son and I will witness that same flame here in Airdrie. Enjoy every moment!!!

The flame in the icy wasteland is beautiful, and the contrast between that environment its place of origin stirs something down deep...

I wonder if it's coming through Cowtown... although, if it will be in Airdrie next Tuesday, that probably means we're in that general time frame :)

Have fun - looking forward to the pics

I'm so happy for canada for having the olympics and can't wait to see them..i FECKING LOVE the olympics.

You commented that the close-up of the Spring, in my 'Pix Muse' blog, is; "Lovely! Very vulva-like!"

Wow, yes! I never thought of that!

Love this! It's coming through our Valley too - going to go out and see it!