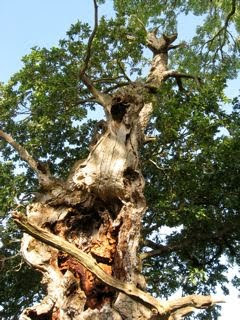 About a mile or so from Glastonbury Tor, there are two huge, ancient oak trees known as Gog and Magog. They are reputed to be Druid trees of great antiquity -- perhaps as much as 1500 years of age. At one time, it is said, they were part of a great Druid Oak Grove where rituals and worship occurred. Now only they survive.

Well, technically only Magog survives (pictured above). Gnarled and scarred by lightning, the old tree nevertheless has an abundance of green leaves. Unfortunately, Gog just recently gave up the ghost and no longer produces any green foliage (pictured below). But both are nevertheless magnificent trees.

In British mythology, Gog and Magog were stern but brave and benevolent giants. They fought for honour, liberty and country. Together, they are the traditional guardians of the city of London. (Check out a fabulous post about them at The Violet Hour!) The Old Testament also mentions mythological beings named Gog and Magog, but they were different characters altogether -- much more frightening figures who were often mixed up with apocalyptic predictions.

We were able to visit the Druid trees because our guide, Mara Freeman, is an expert in Celtic and Druid lore and knew their exact location in the Glastonbury countryside. But it was admittedly a bit of an ordeal getting to the trees and back. Up hill, down dale, through farmer's fields, over farmer's stiles, dodging cow shit and sheep shit, braving slippery mud and trying (unsuccessfully) to avoid barbed wire, thorn hedges and stinging nettles. An adventure in and of itself! 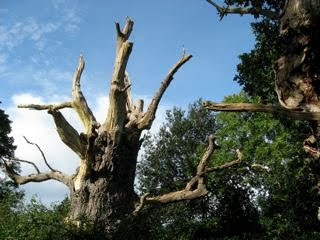 I was Miss world said...

I liked ur interests in spirituality

I love how I don't even have to get off this chair to go with you and see gog and magog.

I think all trees are magic.

Oh wow hon..that is not only amazing but facinating!! I loved hearing about these two magical trees! Thank you for taking me there with you!! Hugs, Sarah

It seems fitting that the journey to see these two ancient beauties was difficult and strenuous...almost like an initiation of sorts...a spiritual journey...
They are gorgeous. I think sometimes that trees must feel very taken for granted in this day and age.

WOW! What amazing trees. How lucky you were to see them...thank you for sharing their lore and beauty with us!

What a magestic sight they are!!! Glad you shared that one. These photos are treasures.
Mary

There's a town in Quebec named "Magog" on Lake Memphremagog. It is short on druidic oaks, but the lake does have a monster.

i just love trees! i take teddy to a park that has these ancient sycamore trees and they are hollow on the inside. you can actually walk inside them. but they still produce leaves each year. amazing!

Very much enjoying your series on these wonderful sites.

What a wonderful adventure! I am in awe that you got to visit two such magnificent trees. Oh, to feel their spirit..... :0)

thanks for braving the elements to take these pictures for us...u da best.

I always want to be in a place where people love trees.

This is a wonderful post... so sad that Gog has stopped pushing out foliage... I'm sure her great spirit lives on in her venerable wood... I do hope no one tries to take her down! Lovely blog, so nice to have found you.

last year while riding on the back of the bike.. i got to talk to the trees alot ;) ~ I often noticed how 'dead' trees still had a spirit... like they were the ancestors to the younger trees.. the 'dead' trees held the wisdom of the ages.. so I started to believe that they are not 'dead'..

your Glastonbury posts have my hyperventilating.. I wanna go so much !!

It was thoughtful of you to take one (including barbed wire) for the team so we could see these amazing trees. Gorgeous! It always gives me goose bumps to see something this old. Oh what those trees have witnessed.
One of my favorite kids books is The Giving Tree. Sniff.

You really had a wonderful guide! And you were brave to follow her - lol! Well, I wouldn't mind a few scars if it meant taking this fantastic trip!

Thanks for your post! I recently visited Glastonbury as well, and met Gog and Magog.. What a wonderfully spiritual place.. :)

the other one is still producing foliage.i was there a few months ago

I, too, just met Gog and Magog - and what a wonderful meeting it was. Can you imagine how it must have been when they were just a small part of a huge avenue of trees, leading to the Tor, and maybe beyond...? :)