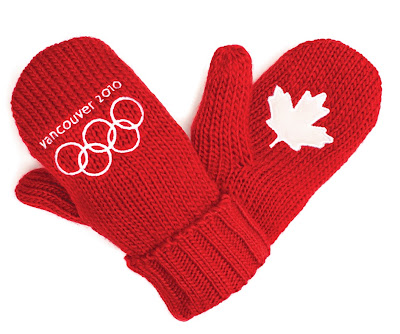 Behold the hottest fashion accessory in Canada right now! These Olympic Mittens, worn by all the Torchbearers, are also being sold to the general public to raise money for Canadian athletes. They are staggeringly popular and the stores can't keep them on the shelves. They are very reasonably priced at $10 -- probably because they're made in China, not in Canada (and yes, that caused a bit of a ruckus) -- and so are an affordable souvenir for most people. They sold out here in Edmonton long ago. The only reason my Rare One and I each have a pair is because we have a friend in Vancouver who was at the Hudson's Bay Company when a big box of mittens was brought out. The whole boxful was gone in less than a minute. Someone aggressively grabbed mittens right out of her hands -- tsk, tsk, where has our legendary Canadian politeness gone?!

Along with our mittens, my Rare One and I wear our 2010 Olympic scarves that were a promotional item last year from Coca-Cola. And yes, we may very well be walking, talking, patriotic, corporate-shill billboards but DAHLING, WE LOOK FABULOUS! 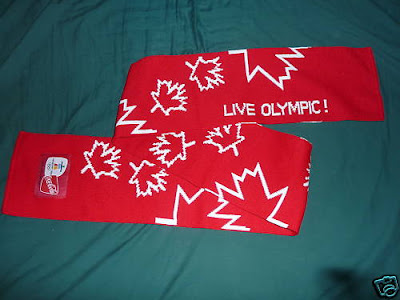 i think those mittens are great!! you must look totally fabulous!! :)

That's super. I'd love to see a picture of the two of you.
Mary

"but DAHLING, WE LOOK FABULOUS!"

Not only are you FABULOUS! You are SUPER-DOPER-DOPER too! ,-)

All kidding aside, thank you.

Yay! I love patriotism and I love the color red. (I shoulda been born Canadian)

Can't wait for the Olympic games!

if they were made in canada i'd buy a pair.

ooooohhhhhh...i want a pair of those mittens. and robbie burns can come to my house for scotch pies anytime!

my hubby works for the olympics and I haven't seen these....arrghhhh !

he's on a plane right now coming home and if I had seen these ahead of time I would have sent him to the olympic store to grab some for me.....

Are those mittens sold in the US? Probably not, but I just thought I'd ask...

Hi Sarita -- I doubt if the mittens are sold directly by any U.S. store, but they could probably be ordered from the Hudson's Bay Company website. Here's the url:

At the moment, they are listed as "out of stock" but that may change as the Olympics get closer.

You have a nice blog, I'm happy about this visit .. Thanks

I bet you two look adorable.

you are sooo right. maybe i should start a thrifting AA! i bought a pair of those mittens from ebay. i am a canadian sympathizer! i lived in toronto for years and my son was born there and my daughter was made their. we traveled all over canada because of my husband's job. i was in calgary and all over BC a lot. i miss canada!

I'm feeling chilly today and could use those warm (acrylic?) mittens...but they might hamper my blogging abilities...perhaps to pop on and off over fingerless gloves? I always admire your black ones!

you are right. someone translated that long ago and when i read your translation i remembered it. thanks!!

Oh gosh - I drool when I see those mittens. I have a few friends that were able to get their paws on some, but I've not had the luck! Love the scarves too - I'll bet you two looked so fab!

Debra ... Since you live in Edmonton ... Have you read Todd Babiak's *The Garneau Block*? For some reason, my pea-brain made the connection tonight ... I read and loved the story ... Here's a link ...

Hi Jaliya -- Yes, I have (well, most of it, anyway)! I left a more detailed message for you on your blog, A Post-cynical Seer.