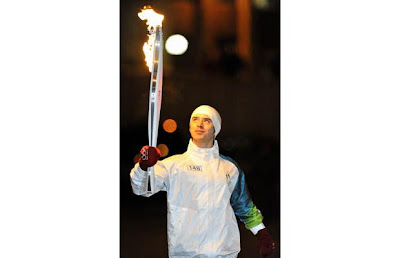 I have never in my life seen as many police vehicles in one spot as I did last night at the Olympic Torch Relay Run in Edmonton. The Torchbearer was preceded by at least 25 police vehicles, all with their blue-and-red lights flashing -- marked police cars, unmarked police cars, police trucks, police vans, a police helicopter in the air and two police officers riding bicycles. Dotted in among all the police vehicles were a few 2010 Olympic vehicles, the shuttle buses carrying the other Torchbearers, a tow-truck (in case anyone had ignored the "No Parking" signs that were all along the route), a City of Edmonton van and various advertising vehicles from official Olympic sponsors like the Royal Bank and Coca-Cola.

And finally, after all that hoopla -- the Torchbearer! The flame was gorgeous against the falling darkness as the Torchbearer ran by. There were lots of people on the street and everyone cheered and waved flags. My Rare One and I did too, all decked out in our red Olympic mittens and Olympic scarves (more on that, tomorrow). The whole thing was marvelous, of course.

What surprised me was that the Torchbearer was accompanied by eight security personnel who ran along with him, four on each side. They were in dark track suits with reflective Olympic rings on the back. Once I thought about it some more, though, it made sense as a precautionary measure. Sadly, the world is not what it once was.
Posted by Debra She Who Seeks at 12:10

It truly is a sad time, indeed, when the torch bearer has to be surrounded by security. Nonetheless, it must have been an amazing sight.
Mary

But what a cool thing to witness. Sadly they never pass through my town.

Must have been a very moving experience.

And yes, I'm very glad the runner had security. Sad, but true...

Mmmmmmmm, since you do Comment Verification [as I do], wondering if you need to make us do Word Verification, to comment here?

How fun that you got to see that! And yes, sadly, some idiot would probably try something dumb if not for all the cops. Which is a shame, because most of us just want to celebrate the Olympics. I, for one, love to watch the winter sports. I'm a sucker for downhill, ski jumping and figure skating. But I grew up in the snow. I like to live vicariously! Great post, Debra.

What wonderful posts on the torch and Hestia's flame! Love it...I have to tell you something...when the Summer Games came to Atlanta GA in the 90's, the Torch came through my county. At the time, there was a huge outcry and political furor going on as the city council passed rulings that were anti-GLBT. The controversy grew loud enough and public enough that when the torch came through that area, they "shrouded" it...the torch and it's bearer were placed in van and driven through that area to hide it in protest against the homophobia and anti-GLBT policy that was being pursued. So no one in our area got to see the torch, only a van driving by, in a stance against this area's deep conservativism and homophobia. It was wrenching event - shame for my state being so publicly visible for the bigotry of their actions, yet glad that they chose such an activist route to take a stand against such behavior. So, I did not get to see the flame when it came by - but I did see history and courage in the making.

~so happy you embraced the moment...and oh what a moment it had to be! i to think of how it once was and wish we could be just as we were...brightest blessings~

the olympic flag run thru west i think the last time it was here in the usa..was soo cool.

The first thing I thought when I read the post title was , "Don't go into the light!!" ;) Seeing the flame coming through on a mid-wintery night is a stirring image for the soul and that little piece of prehistoric brain that hangs out at the underside. It reminds you that there is beauty and meaning in the simplest of things.