The Blue Bowl of Glastonbury 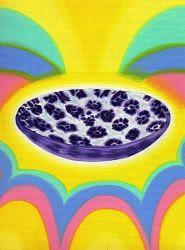 Because of Mara Freeman's connections to the Chalice Well Trust, our tour group was able to enjoy a rather unique experience. In the beautiful meditation room of Little St. Michael's Retreat House, we had the opportunity to sit in silent meditation with the Blue Bowl of Glastonbury.

The Blue Bowl is a small antique dish purchased in Italy in 1885 by Dr. Goodchild of Bath, England. A vision convinced him that it was the Holy Grail. Another vision instructed him to bury the bowl at Bride's Mound in Glastonbury. This was reputed to be the site of an ancient chapel honouring the Goddess/Saint Brigid. In 1906, three women (!) found the bowl and gave it to their spiritual mentor, Wellesley Tudor Pole. Many years of archaeological examination ensued in an unsuccessful effort to date the bowl back to Biblical times. In the 1960s, Wellesley Tudor Pole entrusted the Blue Bowl to the care of the Chalice Well Trust.

The Blue Bowl has become quite the sacred object in Glastonbury. Silent meditation in its presence is a discretionary honour conferred by the trustees of the Chalice Well Trust. Meditation with the Blue Bowl sometimes yields profound visions, it is said . . . or at the very least, a sense of profound peace.

I must admit that I was a bit bemused by all this hoopla about a little dish. But silent meditation is a nice, pleasant activity and besides, what the hell, eh? When in Rome . . . .

I'm actually quite surprised by the impact that the experience had on me. The Blue Bowl meditation has become one of my favourite memories from Glastonbury. Being in the presence of the Blue Bowl truly did impart an abiding sense of peace and beauty. I think of it often.

[The top picture represents the Blue Bowl as the Ace of Chalices in the Glastonbury Tarot, copyright 1999 by Lisa Tenzin-Dolma. The bottom picture is a photo taken by my Rare One of a lovely watercolour of the Blue Bowl. The original painting hangs in Little St. Michael's Retreat Centre.] 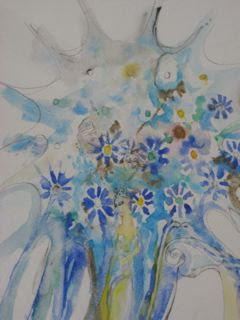 Do you think that the accumulative acts of reverence and the meditation energy imbues an object with spiritual energy?

That never occurred to me, Judith, but I think you're right! The Blue Bowl definitely radiates spiritual energy. Thanks for your insight!

What an awesome experience for you. I absolutely believe that objects give off energy, especially those that have been near and around such high vibrations as meditators.

Wow! What a marvelous thing to share, on this gloomy day in SC, where I determined hold magick. Thank you!

The bowl holds the frequency of reverence and gives back the same frequency...what a wonderful experience.

~amazing...the significance of something so small and simple...how it exudes such power...it is nice that you were able to open your mind and embrace such a beautiful moment...i love the watercolor picture...brightest blessings~

Amazing!!! Awesome!!! And I am envious. (Well, I'm honest) I hadn't know that your tour group was connected to Mara Freeman. I love her.

Wow. Now that IS interesting. Coincidentally, I have a drinking glass from the McDonald's Star Wars happy meal collection from the late '70s, and it yields the same power as the Blue Bowl.

(Why do you look so skeptical?)

I'm going to die un happy unless i get to go there too.

Is it made of glass or clay?

It's glass and the blue flowers are part of the glass itself (as opposed to being painted on).

Since blue, in the context of auras, is the balanced, relaxed, life-sustaining color, it's no wonder you felt such energy flowing from it. It sounds like the bowl, itself, has been imbued with all the energy showered on it. Maybe it just gives a piece of it back as you meditate by it. Put it on my list of things to do!

I have just started centering prayer and that is similar to what you describe what you did with the Blue Bowl.. and yes, I do believe that 'objects' can absorb spiritual energies ~ I feel it in catholic churches all the time.. the prayers of the people & the peace...
I guess the blue bowl is similar to going on a pilgrimage to any sacred place in the world?
you are indeed blessed xo

i bet the energy from this is very powerful. i hope my mittens have good olympic energy!!!!

I beleive the blue bowl was dug up on arc angel mikes birthday. peace