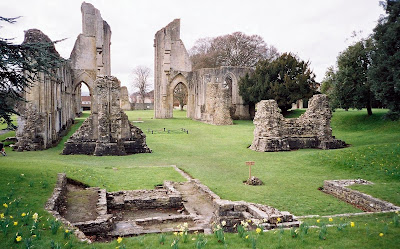 Glastonbury Abbey was an ancient Catholic monastery founded, according to legend, by St. Joseph of Arimathea. It was a major pilgrimage site and over the centuries grew very large and very wealthy on donations. When pilgrims started to slack off at the end of the 12th century, the Glastonbury monks rather fortuitously discovered the grave of King Arthur and Queen Guenevere on the monastery grounds. Business picked right up again.

All was well until King Henry VIII rejected the Catholic religion which refused to allow his divorce. After making England a Protestant country, he systematically destroyed and looted every Catholic monastery in his kingdom. In 1539, Glastonbury was utterly destroyed by the King's men. Its last Abbot was hanged, drawn and quartered on the Tor. Its immense wealth went straight into the King's coffers.

Since then, Glastonbury Abbey has been a magnificent ruin, as seen in the top photo. But it still draws many tourists and pilgrims. The bottom photos are of the ruined Lady Chapel (devoted to the Virgin Mary) and the alleged gravesite of King Arthur. 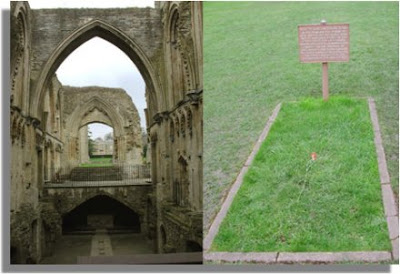 I love anything to do with the virgin Mary darling.

Holy beautiful photos, Batman! I want to print them out at 7000 percent on soft canvas and wrap myself up in their yumminess!

Just looking at the photos sends chills up and down my spiny little spine. I always look small piece of wood when I visit spiritual places or places with lots of spirits (two sides to that coin) because wood replenishes itself so I am not taking something that will be lost forever from that place like stones or rocks. And I always dip my crystal into any water found there.

Oh my, what beauty. I want to go there...only problem is I won't fly or sail.
Mary

This place looks so magickal! Whether Arthur is really there or not, it's a romantic story. Well, except for the the part where the Abbott gets drawn and quartered...eek!

love the phots and the piece of history...the history of KING ARTHUR and HENRY THE VIII are two of my favorites...

Been there. Even hoped the grave was real....

Beautiful pictures and really love the historical tales. Looking forward to the Druid trees too (and more).

So long since I was there. Really enjoyed the abbey.

oh my.. this post is a little syncronicity for me.. I have a post coming up about the Virgin Mary.. you must tell me what you know about the Lady Chapel and Mary's connection..
as to Arthur... I am sure my grandpa who was born in Devon.. was named after King Arthur!! the more I delve into my family history and my 'past' lives.. the more I know deep in my soul that I am somehow connected to all of this. - that is why Glastonbury calls so much to my soul..

thanks for the reply comment! .. cannot wait for your Mary post...xo

...Glastonbury monks rather fortuitously discovered the grave of King Arthur and Queen Guenevere

Funny how things work out sometimes, isn't it? Well, if it worked, more power to them. Who am I to criticize?