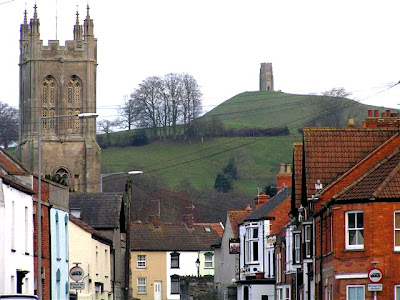 Well, now that the holidays and general craziness of December are over, it's time to get back to recounting the tales of our recent pilgrimage to various sacred pagan spots in England.

So far the stories have all been about Glastonbury -- the Tor, Chalice Well Garden with its sacred spring and pools devoted to the Divine Feminine, Wearyall Hill and the Sacred Thorn, etc. But before we move on to other places in England, there are two sacred spots left to describe in Glastonbury -- one Christian and one pagan -- Glastonbury Abbey and the Goddess Temple.

And now that I think of it, I really should tell you about the Blue Bowl of Glastonbury also.

So in actual fact, there's still quite a few Glastonbury Tales left after all. Stay tuned!
Posted by Debra She Who Seeks at 06:02

~i guess i have to back track as i have missed the beginning of this tale! off to be reading now! brightest blessings~

Don't skip any of the tales please dear friend. I want to hear all about them.

Glastonbury is on my bucket list.. and I surely wish that it happens.. each time I plan on travelling to the UK.. life has other plans.

Oh, I want to hear all of them. What a magical, wondrous place to visit.
Mary

Oh yay! Since I haven't been, I'm living vicariously through you!

I love Glastonbury and miss how green England is... looking forward to the tales!

Please don't leave anything out! I want to hear it all!!! I love armchair traveling - The next best thing to being there!