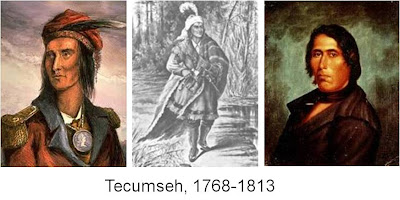 Tecumseh was a brilliant Shawnee chief, politician and warrior. The Shawnee, like other tribes, were driven off their traditional territory in what is now Ohio by the American military who brutally cleared the way for advancing American settlement. From childhood onwards, Tecumseh steadily engaged in warfare, violence and conflict with the United States.

Tecumseh spent his life trying to forge an Indian Confederacy strong enough to withstand white takeover of continental America. But the tribes were in crisis and in flux, traumatized and divided, inclined to fight among themselves rather than to unite against the larger enemy. Tecumseh did not succeed in creating a unified Confederacy. But he did lead a significant alliance of warriors drawn from various tribes. In the War of 1812, Tecumseh led his warriors north of the Great Lakes and teamed up with the British, who made big (but ultimately empty) promises of granting territory for an independent aboriginal nation. 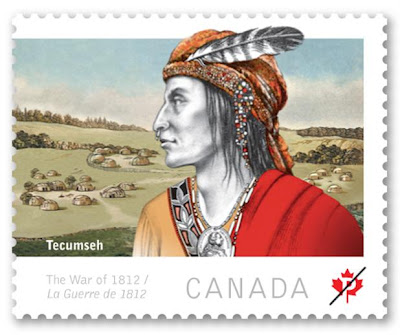 Tomorrow: What Was the Upper Canada Militia?

Too bad he didn't succeed.

My husband grew up on a farm near Thamesville in Ontario. He says that Tecumseh was buried on the farm property. I wonder??

How awful to be driven off your land. I can't imagine.

which day is the test? i think i will get an A!

I wish more people knew about Tecumseh and all the amazing things he did.

so sad, another sad thing is my blog was hacked, or removed , what ever, right after I did the post about the residential schools, but i'm still here to read yours!!

I read about him when I was a kid(my choice)...and the way the tribes were so divided, reminds me of the democrats today.

I've read about him. He was amazing.
Mary

These War of 1812 posts have been terrific.
Thank you!

Thank you for this post. I really enjoyed it!

Quite the guy! Great blog, Debra.

A tragedy indeed for all aboriginal peoples. Tecumseh, a 'hero'! Maybe his vision will be realized.

I have always admired Tecumseh and his strength and vision. Such a shame he was unsuccessful in achieving his goal of a confederacy.

I remember Tecumseh in history! A strong man and admired!