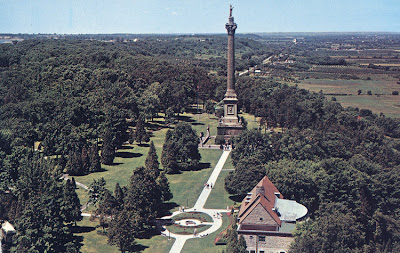 Later in the mid-1800s, the battlefield of Queenston Heights was transformed into a beautiful park and a huge stone monument was erected to honour Major-General Sir Isaac Brock. In fact, he is actually buried beneath it. A few years ago when My Rare One and I were in Ontario to visit Niagara Falls, we took a little detour and went to Queenston Heights to see Brock's Monument as well. 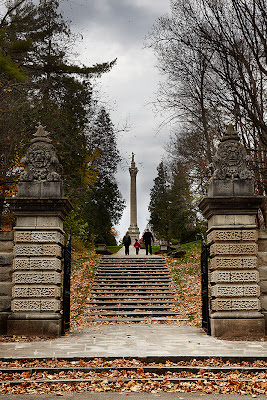 In typical 19th century style, Brock's Monument is intimidating in size, phallic in nature, rather grandiose and oh so very British. It reminded me a lot of Nelson's Column in London's Trafalgar Square. It is definitely worth seeing. I think every Canadian should visit Queenston Heights and Brock's Monument at least once, if possible. It is such an important site in Canadian history.

But we discovered that there is also another important Memorial on Queenston Heights!

i can't wait to see what it is!

So where's the picture you took from the top of Brock's Monument, eh Debra? Eh? Eh? Eh? Where is it, eh?

Beautiful photos of a lovely monument. I hope to visit there at some point and take some nice snapshots.

Such beautiful pictures, Debra! I visited Niagara Falls when I was younger and it was an awesome sight to behold.

It does indeed resemble Nelson's column! It looks impressive, especially with all those steps leading up to it.

Beautiful photos!!!
http://kitchenista-welcometomykitchen.blogspot.com/
(how to separate eggs with a plastic bottle)

Grand in the manner of the Brits indeed and quite imposing. A fitting memorial.

are there any ugly places in Canada?

We sure will visit this site. I feel so insular here in the Maritimes that I am realizing I missed a lot of what made us Canadians.

Thank you for doing this 1812 review. Nice to read

That does look like one of the Trafalgar square columns. But did they eat steaks on top of it? (You know that story, right?)

No, Riot Kitty, I don't know that story. But it sounds really intriguing . . . .

Great pictures Debra! I would like to know about the story Riot Kitty is talking about too?

I am so glad that Canada is there. It gives a lot of us Americans hope and inspiration.

Great history. I've driven by this memorial SOOO many times, on my way to Niagara on the Lake. And, of course, I live in the enemy territory these days, right across the Niagara River (which isn't really a river -- did you say that in one of these entries? -- I've even heard it called a strait) in Buffalo. Were you out this way? Woo hoo, sorry I missed you !