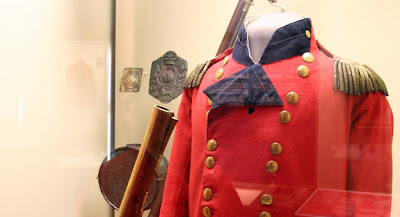 Sir Isaac Brock's death while defending Upper Canada from invasion guaranteed him major hero status in Canadian history. Brock's military tunic and other artifacts from the Battle of Queenston Heights are on permanent display at the Canadian War Museum in Ottawa. See the bullet hole right underneath the black lapel? That's where the fatal musket ball got him.

The city of Brockville in Eastern Ontario is named for him, as is Brock University in St. Catharines, Ontario, the largest city on the Niagara peninsula. There's a township in Ontario and a village in Saskatchewan which also bear his name, as do numerous schools across Canada.

When I was a kid, I learned to sing a Canadian folk song celebrating the Battle of Queenston Heights. Its romanticized lyrics were written in the 1800s but the melody was composed in the 1960s by Canadian folklorist Alan Mills. Here's the first verse:

Upon the heights of Queenston one dark October day,
Invading foes were marshalled in battle's dread array.
Brave Brock looked up the rugged steep and planned a bold attack;
"No foreign flag shall fly," said he, "above the Union Jack."

You can hear the melody in an excerpt of Alan Mills singing the second verse by going here, scrolling down to #19 and clicking on the little play button.

quite an epic song!

That's quite the musket hole! We have a street named after him here and a school!

This is why I love this blog, because I learn Canadian history, and I enjoy doing it. You can thank the American school systems when I know more about Canada than I do about America, simply because you make learning more fun.

I learn so much here.
Mary

I live not far away from the small town of Ligonier. That is where Fort Ligonier resides. It is an outpost of the French and Indian War. General Washington was a low ranking soldier during this time. When I see the clothing here, or at Gettysburg, or at Williamsburg, I am always, always, ALWAYS amazed at how tiny the people of this age were. And it reminds me that size never matters; heart does.

That is one big hole!

Oh man...that must have hurt by the looks of that big hole!

My knowledge of my own history sucks. Thank you! Lois

That is so funny - the song I mean. I grew up here and have never heard of that sone, HOWEVER, we sang Red River Valley so often the words are still etched in my memory. It is also the only kazoo song I remember playing. We studied Red River carts, Red River settlers and were just generally enamored of the Prairie provinces!!

Ack...that big hole... I'd love to visit that museum. Ottawa is only about 90 minutes away from here, so I should make an effort to visit at some point.

Thanks for the history lesson. I've never heard that song before. I always think how extraordinary their uniforms were back in the day.

I love learning about Canaderian history.

Why is it that these uniforms can hold up for so long before being put under glass, but I have things fall apart in the wash? Inquiring minds want to know!

I'm pretty sure this awesome jacket is haunting me...

You know what Debra, we both can not remember learning anything about Brock in school. I am sure he was mentioned but to no great extent.
So this is all new to me relatively speaking and I appreciate the insights into this man and the 1812 battles.

Great song! Great history! I am a proud Canadian, I just wish more people were these days!