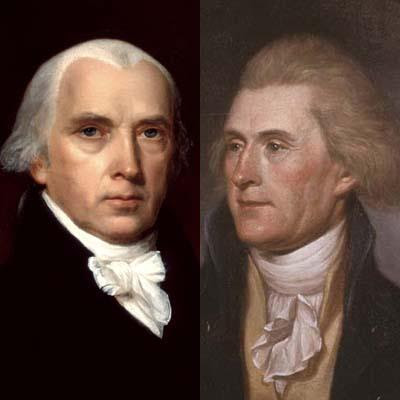 When President James Madison and Congress declared war on Great Britain in June of 1812, the Americans quite confidently assumed that it would be a very easy matter indeed to invade and conquer the British colony of Canada. As former President Thomas Jefferson wrote that summer:

The acquisition of Canada this year, as far as the neighborhood of Quebec, will be a mere matter of marching, and will give us experience for the attack of Halifax the next, and the final expulsion of England from the American continent.

The American government not only thought that the Canadian colony would be poorly defended by the British, but it also made the mistake of thinking that the people of Upper and Lower Canada would welcome the Americans as liberators and so would not put up much resistance.

Wrong on both counts, as it turned out.

Tomorrow: Who Was Sir Isaac Brock?

Imperialism that early. Who'd have thunk it.

it is sad how the Americans are still doing it today - invading other countries through brutal attacks and bloodshed :( History is such a bad bad teacher...

Sigh....and you think the government would have learned....

They say time changes all. I say, "Show me."
Mary

It was a bit arrogant to think the people they terrorized during the American Revolution, the people who came to Canada as refugees, would have been happy to see them. And after they'd been here for awhile even the American settlers who arrived after the revolution for the cheap land wanted them gone. You just can't march into your neighbours country and steal all the chickens, Debra.

Arrogance! As if the invasion of the country later to be known as the USA and subsequent massacre and imprisonment (i.e. reservations) of the Native Americans wasn't enough....

What always puzzled me Debra is that I assumed the original settlers from England, the Puritans/Pilgrims were escaping persecution and looking for a more peaceful existence. Where did all this aggression come from (I kind of think religion was the catalyst)? And it still remains.
Love this post.

early morning geography/history took me right back to high school!

Also, thanks for the blast from my grade 8 history class!

What the Americans tried to do was what we did to the Canadian Natives. We marched in and took what we wanted. Shame on us.

People have been taking things from other since the beginning of time. Freedom, land, stuff. We covet. Where are my ancestors? What was my original culture before the Christians came into the hills of Scotland? Happy to be here in Canada, with our bizarre weather and plaid jackets...

I'm an American so just what are you saying exactly? lol

still arrogant enough to celebrate 'columbus day' as the discovery of 'america'... knowing the vikings beat the italianos to the east coast by at least 300 years... and have yet to discover how long before that the asiatics landed on western shores...

as for brock, he's responsible for brock university, in st.catharines, ontari-ari-ari-o :P lol

Love this story. English, French, Indian and Laura Secord and her box of chocolates beat back a Yankee invasion. THAT'S WHAT YOU GET WHEN YOU CROSS NORTH...BITCHES!

We may be passive, overly-polite and finish our sentences with 'eh', but when push comes to shove...

jeez, you'd think we'd learned something from that by now..but noooooo.

Another example of bad intelligence gathering and disregard for local feelings - they never learn do they?

I actually teach at a small college across the street from where a major 1812 war battle was fought. Buffalo took it hard in that war.