In distinct and pointed contrast to the Imperial British grandiosity of Brock's Monument, First Nations people have erected their own Memorial right at its base to honour their warriors of the Battle of Queenston Heights. After all, Brock died early on in the battle but they were there right to the bitter end, equally helping to save Upper Canada from American takeover. 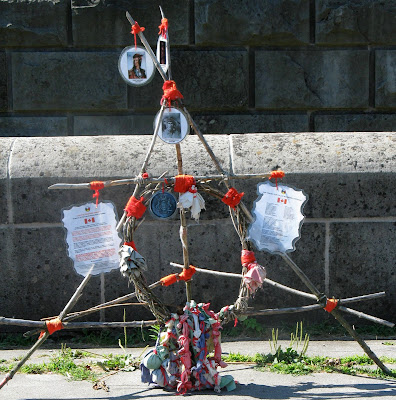 The First Nations Memorial is made of wooden branches bound together with strips of red cloth to form a kind of tripod. A willow wreath rests at its centre in a manner reminiscent of Remembrance Day memorials. Laminated pictures of native leaders from the War of 1812 are displayed along with statements explaining the Memorial's significance. 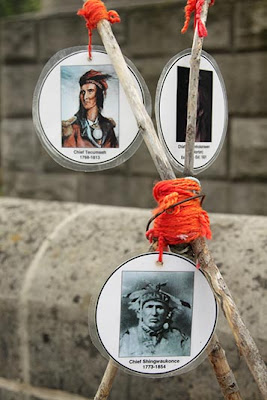 I felt more moved by the First Nations Memorial than by Brock's Monument, actually, because "fair is fair," eh? Everyone's contribution to the history of Canada needs to be acknowledged, honoured and respected.

So, patient blog readers, this concludes my very long series of posts about the Battle of Queenston Heights. My War of 1812 series will resume in about six months time.

Surprise! I thought you were going to talk about Laura Secord's memorial. Recently there has been talk of commissioning a more permanent memorial for the First Nation Warriors at the site. Personally I would also like to see one for the local women who had to go to the battlefield and look for their sons and husbands.

and the natives get screwed yet again!

I thought Laura Secord as well, but was very moved by this post. Next year, we will make a trek out there and visit, it isn't too far away for us.

I liked this memorial the best.

I think they deserve something much more imposing than this.

Had I known that was in the Niagara region last time visiting relatives, I would have gone there as well. Went to the Laura Secord house and grounds which was interesting, but this would have topped it off nicely!

What a great way to close this series, Debra. Boy, does this put the whole thing into perspective for me! We should all be ashamed of ourselves but again the First Nations Memorial is more memorable I feel.

I prefer the First Nations Memorial. It is much more moving with its simple and modest presentation.

This First Nations Memorial is very moving! I love it!

I hope your people treated the Native Indians better than the Americans did..

Amen, my native brothers and sisters!

Not surprising that white men would erect a large monstrosity of a monument - perhaps to fulfill their own inadequacies..... And yet, eventually Nature will reclaim it as well.
May the Great Spirit bless all those that have given their lives.